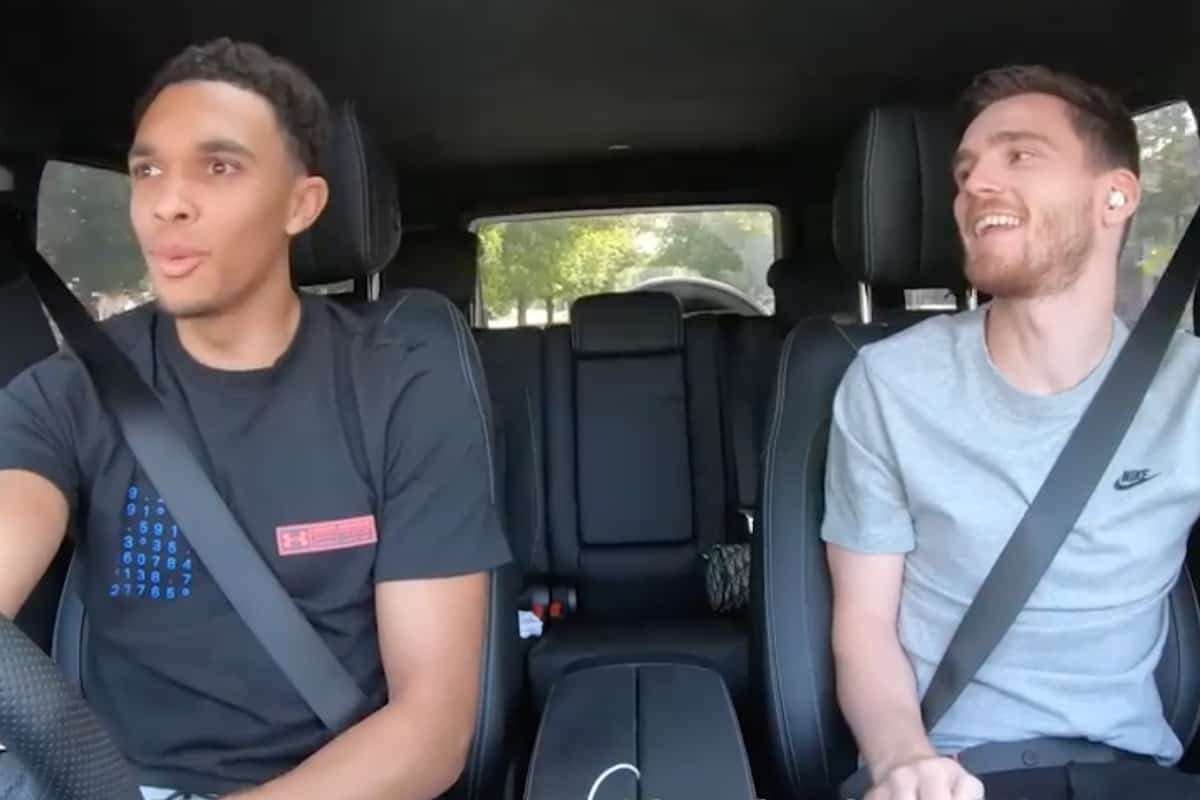 Trent Alexander-Arnold and Andy Robertson antics continued on their new show ‘Wingmen’, with the latest episode honing in on their Liverpool teammates with a brilliant Q&A.

The duo are the representation of the harmony and close-bonds forged by the current Liverpool group, where their respective competitive spirit and banter makes for entertaining viewing on and off the field.

And they took it up a notch having been given their own TV show on Instagram, where the latest episode continues to see them travel around Liverpool, where Trent is in the driver’s seat as Robbo utilises his infectious energy as host.

While there was some disbelief that “they’re still funding this show,” the full-back pair prove they are worth investing in as they tell all on their teammates, from Jurgen Klopp‘s favourite player to who eats the most after training.

They hilariously debate the answers, with Divock Origi‘s fashion sense, which could fit in at a “fashion show,” labelled “horrific” by Robbo, but it was the captain Jordan Henderson who popped up on more than one occasion.

When deciding on who the quickest player at the club is, the pair agreed on Sadio Mane, Mohamed Salah, Virgil van Dijk and Joe Gomez and questioned: “Would you put Hendo in that category? Could he keep up with them four?”

And Trent cuts straight to the point, saying: “He’d say he could. If I’m putting them in a five-man race, I’m not backing Hendo!”

And somehow after pondering who has the highest IQ in the team, it quickly turns around on Henderson, and then Alex Oxlade-Chamberlain similarly gets thrown under the bus.

“I can tell you who it is not, Hendo. And certainly not the Ox,” Robbo states emphatically after putting himself “up there” for the honour of the smartest player in the dressing room.

He does receive high praise for being “very, very fun for being teetotal” on a night out, however, alongside James Milner as “the energy levels they bring are frightening.”

“Energetic to say the least. There’s a lot of movement in there. It’s not just on the spot, he’s moving around a lot,” Trent said of Henderson’s moves.

We ought to have known having seen the Henderson shuffle many a time in recent years!

Trent also open ups on the strangest rumour he’s read about himself (hint: ‘One Kiss is All it Takes’) and if Virgil smells as lovely as everyone says, which leads to a lightbulb moment of creating their own aftershave.

It’s a cracking watch and certainly worth your time as the pair brilliantly bounce off each other in an environment which sees them act as nothing but their authentic selves.