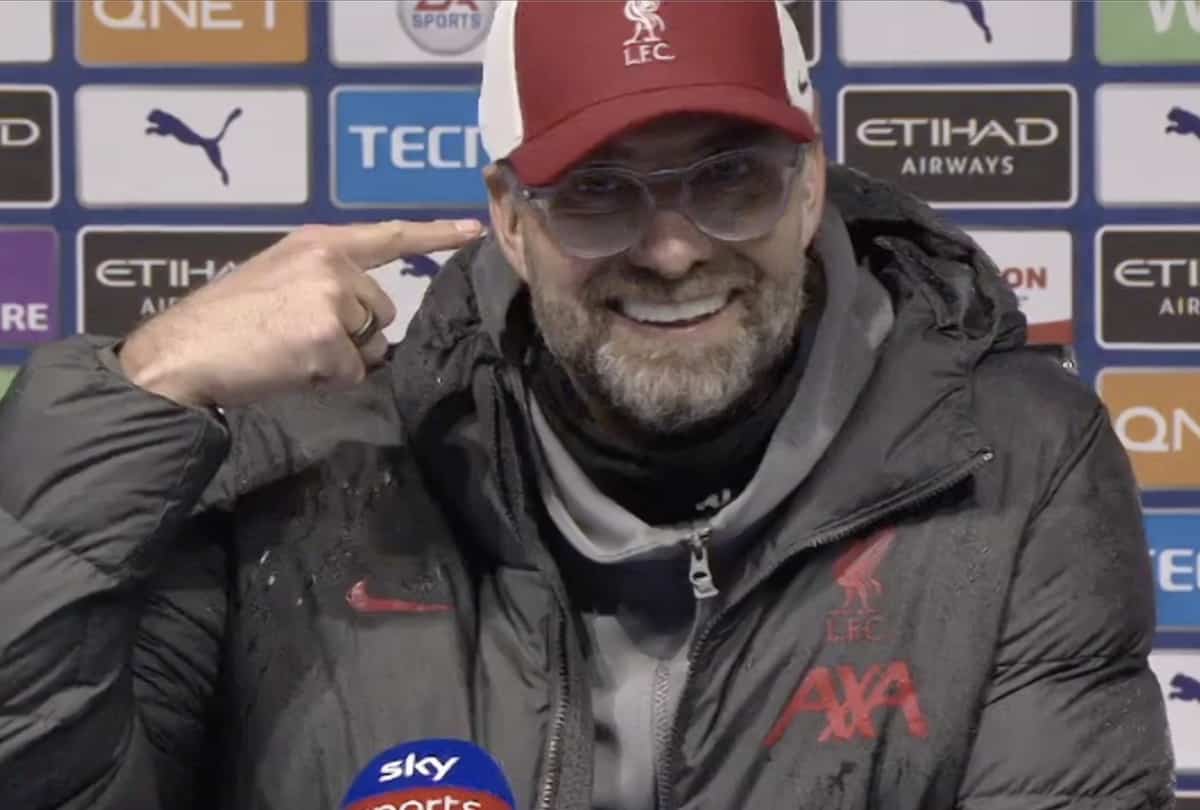 Jurgen Klopp said he was “really happy with the result and the performance” after Liverpool’s 1-1 draw with Man City, but rallied against Premier League ruling.

The Reds looked to be producing another performance worthy of a big victory as they came out of the blocks fast at the Etihad, but by full-time it was far from the 5-0 at Atalanta.

Instead, Mohamed Salah‘s penalty was cancelled out by Gabriel Jesus, with Kevin De Bruyne missing another spot-kick, and a drab second half led to a share of the points.

Given the situation, Liverpool can be content with taking a point, and Klopp reflected this as he spoke to reporters after the game.

“Usually when we play City, we sit here in the press conference and have to say ‘yeah, here we were slightly lucky’, ‘Ali had to make a world-class save’, and these kinds of things,” he said.

“They usually have more clear-cut chances. Today they didn’t, and that’s a compliment to my boys. So we respect them a lot.

“We denied the opponent in a lot of moments, so I’m really happy with the result and the performance.”

But with Trent Alexander-Arnold picking up a calf injury in the second half, the issue of overloading players with a ridiculously busy fixture list for club and country, with no relief with five substitutions, sparked Klopp’s ire.

“I spoke around about two weeks, the club organised a meeting for me with the person responsible for fixtures in the Premier League, and he told me we can’t change it,” he said.

“We played after the last international break [on Saturday] at 12.30pm at Everton, some of our players were in Peru on Wednesday night.

“These kinds of things should not happen. I understand 100 percent the need of television, but the Premier League needs to fulfil more the position of the unity of the players as well.

“So yes, everything changed apart from the fixture list.

“This is an intensity that is really difficult.”

Klopp also spoke strongly on the five sub rule and a “lack of leadership” from the Premier League, with it growing increasingly likely that change will come on the turn of the year.