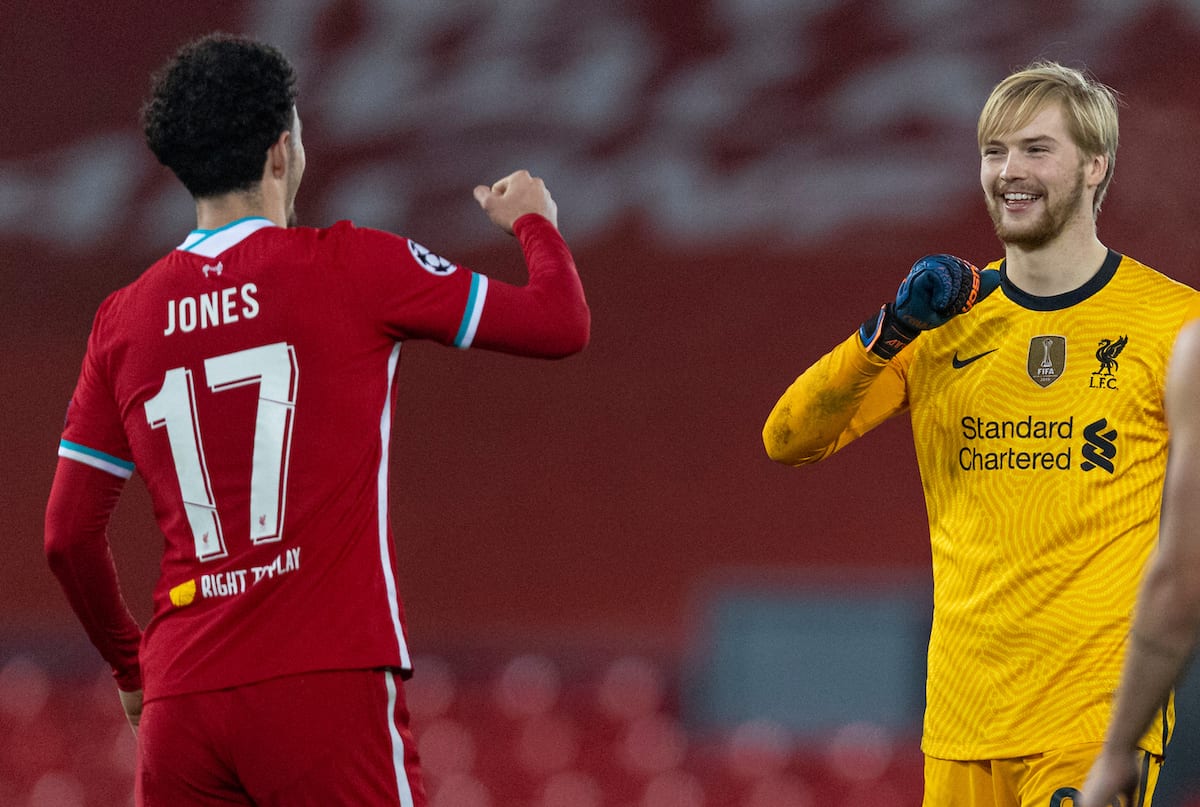 Liverpool’s youngsters were at the heart of their 1-0 win over Ajax to seal their place in the last 16 with a game to spare, and fans were elated with the result.

The aim was clear, secure at least one point for a safe passage into the last 16 of the Champions League and they did just that but instead went for the full complement of points.

The opening half was one which saw Liverpool carve a number of dangerous openings, only for the final pass to let them down – with Curtis Jones coming the closest after finding the upright.

And while Ajax offered a fright in the preceding moments after finding the upright in the second half, the youngster’s unwillingness to give up on the play would be rewarded after he brilliantly found the net with the outside of his boot.

A flurry of further chances came Liverpool’s way as Ajax committed men forward and as they were unable to finish them off, Caoimhin Kelleher‘s brilliant save late on proved vital.

Jones earned plaudits for his performance and cleverly worked goal…

Injuries offer a chance to players to come in and stake a claim for a starting place and Curtis Jones is absolutely doing that right now. Gone from raw prospect to serious first-team contender inside 12 months. Brilliant by him and probably bad news for Ox and Keita.

“Neco and Jones. The young ones combine. Amazing stuff.”

In that order. Seriously talented. Curtis is getting better every week. Still 19 and he doesn’t look one bit out of place.

Curtis Jones is a regular starter for Liverpool at age 19.

Love it. The scouser in our team.

Bettering himself every game.

It's mad how quickly Curtis Jones has taken to Premier League and Champions League football.

Very few positives to come out of this Liverpool injury crisis but the acceleration of his first-team game time is a big one.

What a goal by Curtis Jones.

That’s a great finish from Jones. Made it look easy. Got to blame Onana on that one

Ice in his veins. Take a bow Caoimhin Kelleher. #LFCAJA

Kelleher doing really well. Even though he looks like a little kid who has glued on a fake beard so he can try to buy alcohol from the half blind shopkeeper.

“Impressed with Kelleher. Very good decision by Klopp. Jones is excellent too.”

“Man of the match right there…stand up young Mr Kelleher.”

That Kelleher save has got Alisson v Napoli vibes all over it. #LIVAJA

KELLEHER WHAT A SAVE!

Our boy is stepping up when needed!!!

Jurgen Klopp runs straight to Caoimhin Kelleher to hug him after the game, tells you everything you need to know. Absolutely delighted for him.

SHOULD BE 1-1. BUT IT'S NOT COZ KELLEHER PULLS OFF ANOTHER WORLDIE!!

On the other hand, Liverpool’s finishing left a lot to be desired…

For the fifth half of football in a row, Liverpool have had no more than five shots. Pretty dry toast, this.

Making life so hard for ourselves in the final third tonight. #LIVAJX

Mane is playing exactly like someone who has one goal in his last nine appearances.

Just not quite at the races at the moment.

#LFC really should have put this to bed. Salah wasteful again. Not been his night.

Salah been out of form since returning from covid BUT I fear for the team on the day when it all clicks for him again… ????????

But there were plenty of positives to take, including the performance of Neco Williams…

Fabinho is one of the most intelligent players we have ever had. Stunning understanding of the game sometimes

Neco Williams assist. Against Ajax in CL. Let’s give the lad a chance eh? #LFC.

Neco Williams is such an interesting player. So raw but technically very gifted. Doesn’t let the odd mistake get him down and backs himself to do the difficult things. Somebody that will benefit hugely from game time.

Absolutely no surprise that Henderson strolls back into midfield and suddenly Neko Williams looks like the top quality young right back he is.

Neco Williams has had a really good game. Solid enough first half, stepped up and seemed even more confident in the second. Great to see. #LFC #UCL

Robertson #lfc is such a player. Where’s the weakness? Looks to have everything for the modern full-back. Stamina, concentration, defending, crossing, attitude. Good technique, can switch play, full of assists and a ferocious will to win. Leader, too.

I would 100% pay for an option that allows me to watch Liverpool games with live audio from Jordan only. Man is always talking.

Firmino’s recent performances have been so sharp, definitely on his way to being back to his best

Overall, it was a special night for the Reds as they progressed as group winners…

Great result to top the group & a particularly special night for the youngsters. A Champions League goal made by two Academy graduates, who were both superb, and an impressive debut for Kelleher. Onto the knockout stages.

Not the best #LFC performance you will ever see but an important, battling win. Got their first bit of good fortune in some time with that Atalanta result ensuring they go through as group winners, too. Can't wait to see the starting XI against Midtyjlland…!

Superbly managed game. Klopp straight over to Kelleher and for good reason. Unreal performance, can’t do more to stake a claim as Alisson’s deputy. Fabinho and Matip solid, true grit from Robertson to power through a knock. Liverpool done themselves plenty of favours. #LFCdigest

Entertaining game, and some big performances from some massively inexperienced players. Neco's best game in a Liverpool shirt.

“Very professional performance 3 points qualification in the bag and we will finish top of group. Last game will be youngsters…well done.”

Finished 1-0, could have been about 5-3. Night belongs to Kelleher, Williams and Jones for me. Not only through but through as group winners, which means we can send the U18s to Denmark next week. Big boost.#LFC

That’ll do – not pretty but very professional. Also, an excellent debut by Caoimhin Kelleher. Don’t want to get carried away but it looks like Liverpool may finally have a No2 goalkeeper who is actually quite good.