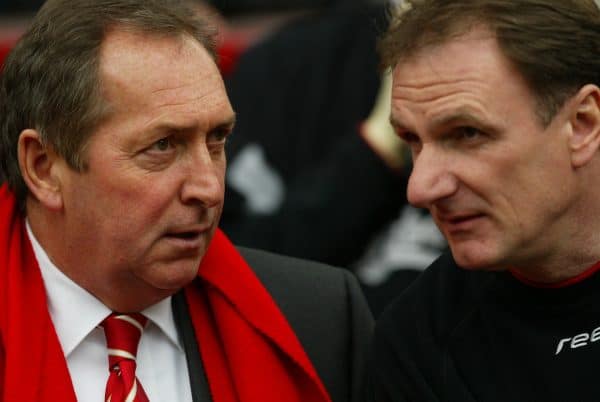 Phil Thompson has paid a moving tribute to the late Gerard Houllier, describing the moment he joined as assistant manager at Liverpool as “one of the greatest of my life.”

The news of Houllier’s passing was announced on Monday morning, with the Frenchman losing his battle with illness overnight aged 73, days after heart surgery.

It is an extremely sad moment for the world of football, and no less so than on Merseyside, with Houllier having made a remarkable impact on Liverpool during his six years in charge.

Having initially been brought in as joint-manager alongside Roy Evans, Houllier took sole charge later in 1998, and soon after he invited Thompson to join him as his assistant.

The former Reds captain gladly accepted and served in the role until 2004, when the pair both departed the club, while for six months from the end of 2001 he stood in as caretaker manager as Houllier recovered from a heart problem.

Soon after the confirmation of Houllier’s death, Thompson took to Twitter to pay tribute to his long-time colleague, thanking him for “one of the greatest moments of my life.”

“Absolutely devastated and heartbroken at the sad news of the passing of Gerard. My mate, my colleague, my boss,” the 66-year-old wrote.

“One of the greatest moments of my life was when we come together in 1998.

“Just to be in his company was an absolute treat. So loyal, so passionate and extremely fierce.

“So many wonderful times, bringing smiles back to peoples faces. 2001 should never be forgotten.

“Since we finished, at the end of every conversation we had, I told him I loved him and would always be grateful for him giving a wonderful partnership.

Together, Houllier and Thompson enjoyed considerable success, including bringing in five trophies in the year of 2001, most notably a treble of the UEFA Cup, FA Cup and League Cup in the 2000/01 campaign.

Off the pitch their relationship was resolute, and Houllier even approached Thompson to return as his assistant when he took over at Aston Villa in 2010, though the Englishman turned it down due to the demands of the role.

Thompson’s words are consistent with the many, many others to honour Houllier following his passing, with it widely acknowledged that he was one of the kindest and most generous figures in football.

It is a sad day on Merseyside. Rest in peace, Gerard.