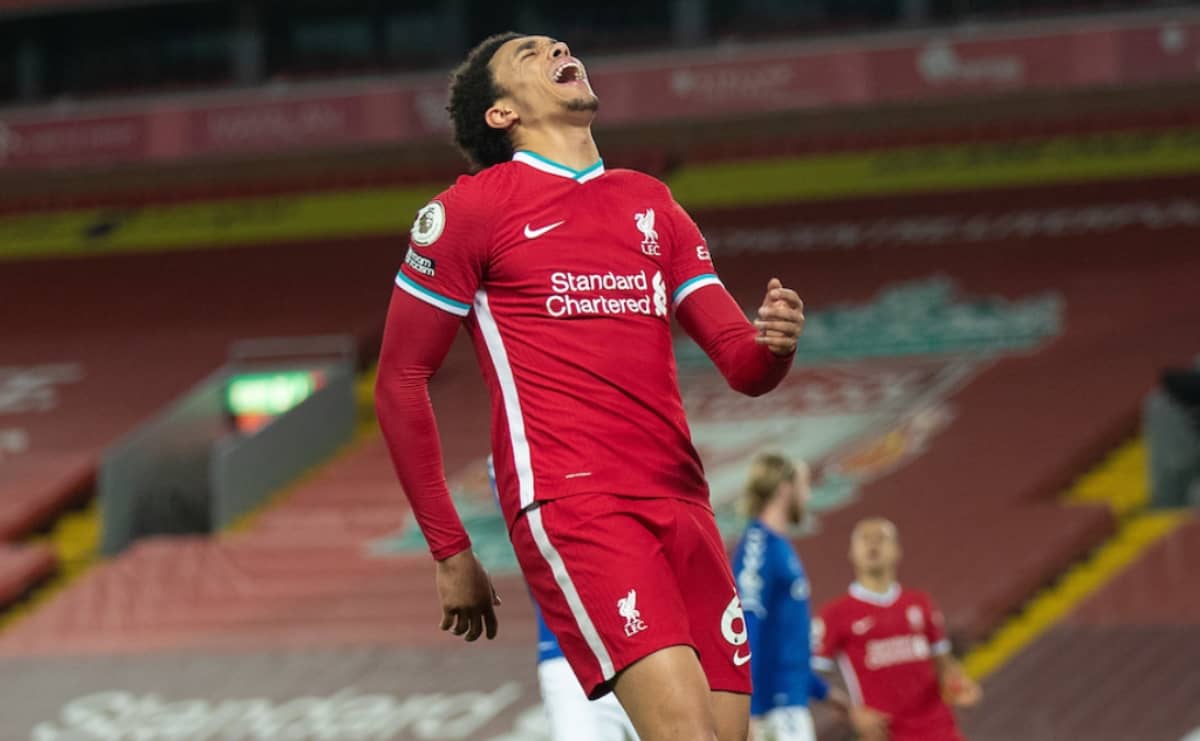 Liverpool were left tasting defeat at Anfield once again as Everton ended their 22-year winless streak in a 2-0 victory, and fans were left rightly frustrated.

It was back to Anfield for the Reds where Everton awaited, and it was another night to forget for Jurgen Klopp‘s men as Everton ended a 22-year winless run at Anfield.

The matchup didn’t get off to the best of starts, with Richarlison finding the bottom corner before Klopp’s side had even ventured into their attacking half.

An injury to Jordan Henderson compounded the woes as the Reds struggled to piece together meaningful chances in attack once more on home soil.

A bewildering decision from the referee, despite even having a replay – which he didn’t pay much attention to – then saw Everton convert from the penalty spot.

There was, of course, disappointment but also some perspective…

Congrats to EFC on finally winning the 'We beat Liverpool' Cup.

All it took was a global pandemic, an empty stadium, injuries to 5 of our centre backs, cheating ref & double our net spend in last 5 years.

Enjoy your imaginary trophy. Don't forget to pick up the VHS on Monday.

The answer to ‘What has happened to Liverpool this season?’ is a very, very straightforward one. They have been completely decimated by injuries.

Nothing lasts forever. This was going to happen someday. It took 22 years. And of course it happened in this god-forsaken, null-and-void-it season. #LFC

It’s so Everton to win a first Anfield derby of the Millennium with no fans there to see it, no pubs open to celebrate it & less schools/workplaces open to rub it in on Mon. Had to happen some day, they deserved it & the Champions were poor, but it felt worse in ‘99 #LIVEVE #LFC

When we said we’d do anything to win the league, I’m wondering where ‘anything’ ends

Numb to it now. Everything's against this team and it's just one of those things. Another injury, another scandalous VAR call, there's nothing Klopp can do about this.

Everton fully deserving of their win, though, defended superbly.

But do bear in mind

Twice the number of Subjective VAR decisions against, than the second worse off team in the league

I'll take my lumps. 22 year record bound to end at some point and given our huge drop in form this was Everton's chance and they took it. Never a pen but made no difference in the end.

Not for the first time, the ref took centre-stage for all the wrong reasons…

That the ref had such a derisory look at the monitor shows how little he gives a shit about making the correct decisions. Absolute farce.

How on earth is that a penalty? One of the worst decisions I’ve seen this season.

“The referee barely looked at it? Wow. And they call Mo a diver.”

– Surge on This Is Anfield.

Can't understand how anyone who has been watching Liverpool this season expected the referee to change his mind there. No chance.

We've been pretty mediocre today and perhaps deserve to lose, but that penalty decision is an absolute disgrace no matter which way you look at it.

Honestly I do a better job of pretending to read the Nando’s menu before ordering than Chris Kavanagh has done pretending to look at that screen there.

Liverpool very poor, but how on earth can you give that as a penalty? Calvert Lewin makes a play for the ball, realises he isn’t going to score, falls over and knees Trent in the face and gets a penalty. VAR utterly pointless.

The injury to Hendo just summed up the season…

Injuries. This season is an absolute joke.

You just have to laugh at these injuries now.

What on earth is Klopp meant to do with this situation? It's impossible. Worked wonders considering, quite frankly.

166 @premierleague games missed through injury this season by @LFC players

Nat Phillips and Ozan Kabak are #LFC's 18th centre-back partnership of the season. We can keep looking for deeper reasons for their problems but performances and results won't improve until these injuries stop.

So that's now BOTH midfield emergency cover centre-back options injured along with the first, second and third choice senior centre-backs all at the same time. Ridiculous.

Our injured list would challenge for the league. Absolutely insane.

All 3 senior centre backs out, and now both midfield-turned-centre-back deputies too. Absolute joke of a season.

So that’s the two starting centre-backs, the third choice centre-back and the two midfield makeshift centre-backs now all injured. The 18th central defensive pairing of the campaign. This season is a joke.

We just play sooooo slooooowwwwllllyyyy now. It doesn't work. We score and we win when we play fast. We haven't done that in a long time.

Liverpool have an awful habit of giving away completely needless, cheap fouls which suck all momentum out of the attack and allow the opposition to reset.

Liverpool have dominated this, have made big chances and the xG is presumably promising for long term… but there's something off about them, and almost an anxiety infecting play close to goal.

That strike summed up everyone right now.

Aside from Salah’s penalty against City, Liverpool have now failed to convert their last seven clear-cut chances at Anfield.

First 15 of the second half aside LFC didn’t look threatening with possession. EFC not overly tested defensively and comfortable with their shape. Henderson injury a huge blow too.

“STOP PLAYING SLOW & BACKWARDS!!! Intensity needed – no way was that ever a penalty!!!!”

At no point have we really looked like scoring today.