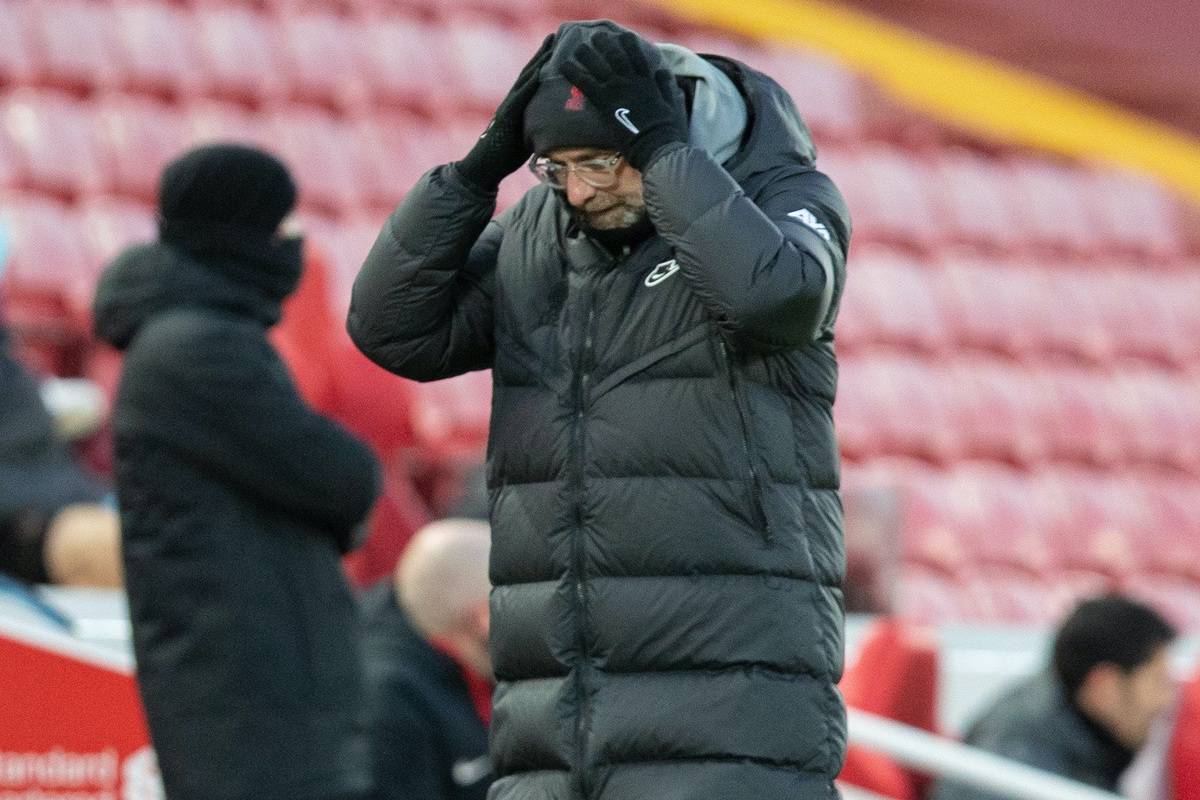 Liverpool fell to yet another Anfield defeat to all but end their title hopes as Man City emerged as 4-1 victors, and there were a lot of emotions at full-time.

It was a game with far-reaching implications for the Reds as they played host to league leaders Man City,

Liverpool were the ones to dominate early possession but it was the visitors who were handed a goal on a silver platter from the penalty spot, only for Ilkay Gundogan to sky his effort over.

But he would make amends at the start of the second half after a sloppy show of defending, and while Klopp’s men were not at their best they found a way back through a rare penalty.

Mohamed Salah would convert to end the recent barren run at Anfield, but level terms were short-lived after a rare nightmare in possession for Alisson paved the way for City to score two in as many minutes.

There would be no coming back as Phil Foden added the finishing touches to what was a forgettable evening as City moved 10 points clear of Liverpool.

Alisson had an absolute nightmare…

Horrible day for Alisson but worth remembering the countless times he's come to Liverpool's rescue since signing. Nobody will feel worse than him

Somebody slap Alisson so he wakes up. How can he keep doing that shit??

All three goals self inflicted and so avoidable.

Klopps subs are fucking disgraceful btw, we havent been able to play out since and it’s gone from 1-1 to 1-3 in 15 minutes

The Alisson mistakes are clearly insane but Liverpool lost their rhythm with the double substitution.

“Lost our momentum with the subs.”

“Klopp subs has taken the wind out of our sails…”

Away from the Reds, the commentators also didn’t have a great outing…

Neville complaining but this is what a big game should be like. Should be cagey and patient. Not fucking 3-3 before HT.

Obsession of the commentators to make it sound like Liverpool are being outplayed here is…odd.

Neville's non-stop whinging has been painful to listen to that half. Seems intent on picking holes in absolutely everything both teams do.

We’re the better side here. And getting better as we go on.
Haven’t got a clue what game Gary Neville’s watching like.

Instead of complaining about the lack of intensity and quality, shouldn’t Neville be attempting to explain it?

But Jones was rightly praised, although there was confusion over his withdrawal…

Was skeptical about Jones' inclusion before kick-off but have to say that he was excellent. Understand why Klopp took him off to add a more defensive player who can give #LFC more control, but still harsh on Jones.

Curtis Jones is boss, isn’t he? Just wish he’d push forward a bit more and take people on because he’s more than capable.

“Jones probably our best player there. For a player with a reputation as being flashy he gets through an awful lot of defensive work.”

Jones with a superb performance overall after that safety-first start. Cannot for the life of me understand why he wasn't in ahead of Milner (4 starts in 10 days at his age) against Brighton.

And there was obvious disappointment as targets shifted…

That’s the title done. I think the relegation battle is done too. The ‘excitement’ of this season will now even the top four battle.

Man City have finally won at Anfield and all it took was £1.5bn in the transfer market, a global pandemic, an empty stadium, a Liverpool central defensive injury crisis and two howlers from the usually reliable best goalkeeper in the league. Congrats #LIVMCI #LFC #PremierLeague

9 points from 9 games since christmas. Appalling.

Today has felt like waiting for test results for Liverpool. ‘What’s the damage?’ kind of situation. Even a draw wouldn’t have been enough. Time to make peace with it now, remove the pressure of retaining the title. That has gone, and #LFC need to adjust to their new normal.

CL qualification is a must now

“Title challenge was already over. I’m now worried about the top 6 challenge.”

The team have had a couple of heart to hearts this season. Nothing changed.

We have come back from Watford and Spurs away and been better. This season we’ve had some shockers and not got better.

Klopp will sort it hopefully. I don’t know the answer. #LFC

Nothing to admire whatsoever about that #LFC performance. Simply taken apart by opponents who looked fresher, more confident, and infinitely more cohesive. We can't dismiss the impact of injuries but you expect more fight from a team who effectively surrendered their title today.

It is what it is, really. Liverpool just look a team completely drained of physical and mentally energy.

Having to retain their level for a fourth successive season was always going to be tough – doing it with these injuries, no fans etc has made it impossible.

Season goes from bad to worse for #LFC but nobody will convince me this group of players have turned shit overnight. So many factors leading to a huge dip. Well done to City on title win. We will be back next season.