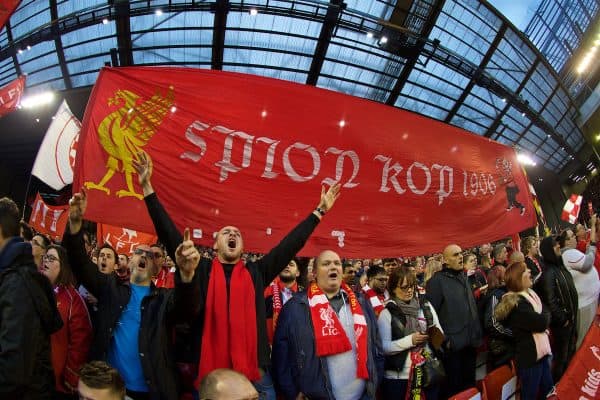 “The place erupted” – The Voice of Anfield picks his favourite atmosphere

Liverpool’s much-loved stadium announcer George Sephton, aka The Voice of Anfield, has revealed what he believes is the greatest atmosphere in Anfield’s history.

George has been part of the Reds’ furniture throughout the glory years, playing an eclectic mix of songs before and after games, not to mention announcing the goalscorers in his unique tone.

Known as the ‘Voice of Anfield’, the 75-year-old has been at the club for close to 50 years, having worked on his first match against Nottingham Forest back in August 1971.

Few Liverpool supporters have been afforded such a special vantage point throughout history, with George fortunate enough to witness the great teams of the 1970s and 1980s, same balmy European evenings in the 21st century and the Reds’ long-awaited first Premier League title last season.

Speaking on the new This Is Anfield podcast, he chose the unforgettable 4-0 win over Barcelona as the most special home game in the club’s history, pinpointing the final whistle as the moment Liverpool’s world-famous ground has been at its loudest:

“It probably was that fourth goal against Barcelona because it was just surreal what was happening in front of our eyes.

“Speaking for myself, when I saw the ball go in the net, I didn’t react for half a minute because I thought the referee was going to blow the whistle and say ‘take that again’. So the roar actually built.

“But at the end of that game when that final whistle went, after what seemed about four hours between the fourth goal and the final whistle, the place erupted. Nobody, or very few people, went home, they just had to stay.

“I banged on “You’ll Never Walk Alone” and the atmosphere was great.

“You look back to Saint-Etienne in 1977, that was a noise when we got through that, and Chelsea in 2005, but Barcelona knocked all them into a cocked hat.

“If anything ever surpasses that I’ll be very pleased to be there.”

It is hard to disagree with George’s pick, with the volume inside Anfield scarcely believable after Liverpool produced one of the all-time great comebacks.

That image of James Milner holding the ball in the corner and the whistle finally blowing is a memorable one, as were the scenes that followed in the minutes afterwards.

Jurgen Klopp and his players swayed in front of the Kop as “You’ll Never Walk Alone” played, as George absolutely nailed his choice of song.

He played his own role on a truly special night on Merseyside – here’s hoping there are more to come in the approaching years.

* You can pre-order George’s book, ‘The Voice of Anfield: My Fifty Years with Liverpool FC’, here.

* Subscribe to the new This Is Anfield podcast here.