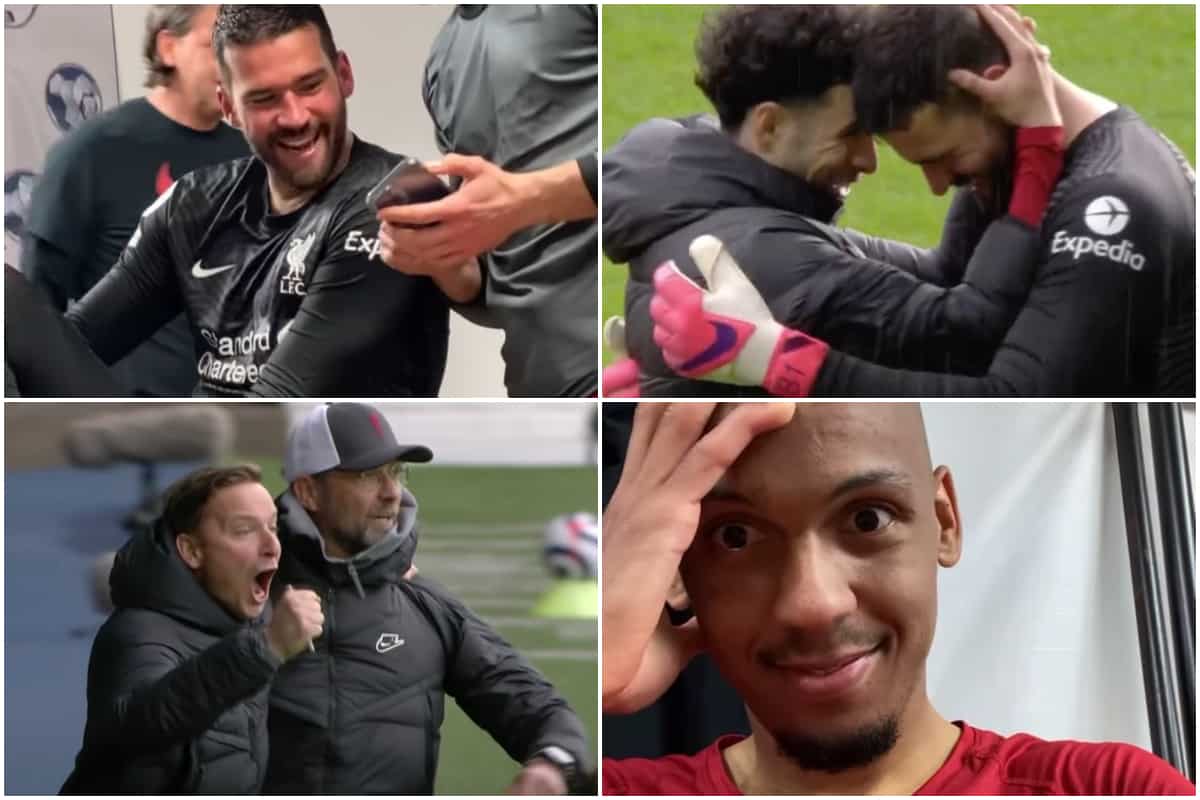 There was only one thing on every Liverpool supporter’s mind after Sunday’s 2-1 win at West Brom, with Alisson‘s incredible winner a truly unforgettable moment.

The Reds looked to be fading out of the top-four race as they failed to capitalise on a dominant performance at the Hawthorns, with Mohamed Salah‘s brilliant equaliser appearing a consolation.

But up stepped Alisson, in the 95th minute, to head past an otherwise-resolute Sam Johnstone and clinch the three points to maintain Liverpool’s hopes of booking a place in next season’s Champions League.

For Jurgen Klopp and his squad – their No. 1 included – the focus will shift quickly to Wednesday night and a trip to Burnley, but the scenes at the Hawthorns will be savoured by fans.

Here’s what supporters have been talking about after a vital 2-1 win at West Brom.

Those scenes on the touchline…

One of the few benefits of this season being played out in empty stadiums has been a closer look at the goings on in the dugout.

Klopp is one of the most captivating managers in world football, and even without a packed Hawthorns to feed off of, the German, his staff and his substitutes were there to relish Alisson‘s winner.

Pepijn Lijnders roared on the touchline as Klopp turned to his long-time assistant Peter Krawietz for an embrace, while an errant “fucking hell!” floated down from the stands.

It shows just how much the goal means to Liverpool.

And in the dressing room!

After the game, Alisson was able to soak in the adulation as he returned to the dressing room, as Fabinho‘s Instagram story revealed.

The midfielder was still in disbelief as he turned the camera to his compatriot, who was sharing a moment with Adrian, his loyal deputy.

Adrian was showing Alisson something on his phone, which may have been…

Alisson Becker – I Will Always Love You pic.twitter.com/LuZQ5i2fPH

Alisson‘s header, set to Whitney Houston’s ‘I Will Always Love You’. Can it get any better?

Everyone wanted a moment with Ali! 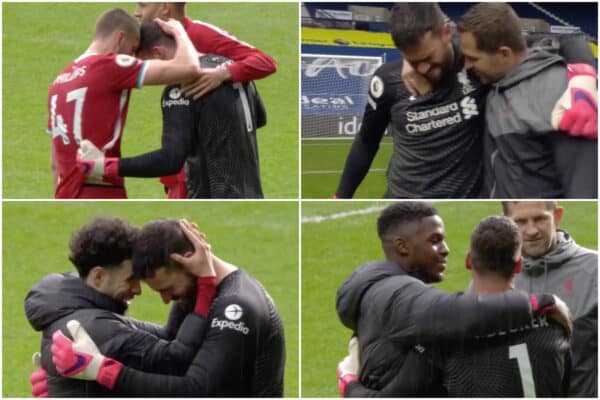 Following the loss of his father, Jose, and the birth of his son, Rafael, the importance of Alisson‘s goal to the man himself was painted on his face at full-time.

The line of players waiting to enjoy a moment with their goalkeeper showed that this was shared throughout the squad, with almost every player celebrating with the 28-year-old.

From Curtis Jones to Billy Koumetio, the Reds made Alisson aware how much he is valued at Liverpool.

It has been a strange season, and those who would usually be in the stands week after week have been forced to adapt.

For The Redmen TV’s Paul Machin and Chris Pajak, that has meant watching from their studio, but on this occasion it served up a priceless reaction.

Alisson Becker scoring a header in the 94th minute whilst making grown men screech and remove their tops.

Meanwhile, at Hotel Anfield, crowds of supporters enjoyed the moment together.

Just watched the game back on MOTD2 but I cant get enough of it. Alisson Becker. What. A. Man.

Bring on Sunday, when 10,000 fans can return to Anfield – and then next season, when hopefully it will be full again!