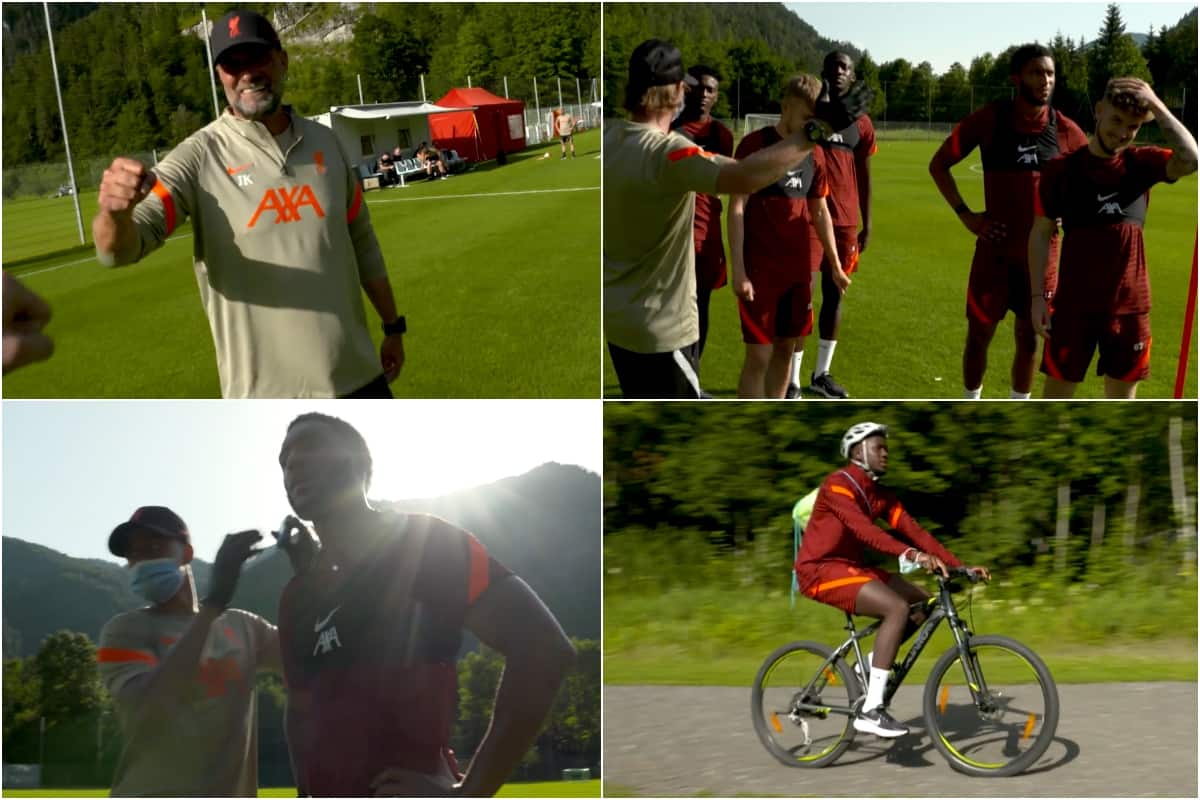 It’s the start of another new chapter for Liverpool having returned to pre-season to prepare for the 2021/22 campaign, and the boss is sporting a new look.

The countdown is on for the Reds, with their new season getting underway against Norwich in the Premier League on August 14.

A host of senior figures will remain absent in the early days of preparation following their international exploits, but the manager currently has a 34-man squad to work with.

And instead of an immediate start on home soil in Kirkby, Liverpool opted to head straight to Saalfelden in Austria – and they wasted little time in getting to work.

While some travelled together from the UK, many made their own way to the Brandlhof hotel, which hosted the Reds last summer.

And here are eight things we noticed as Klopp’s squad started pre-season training.

Gomez, Van dijk and Matip are BACK 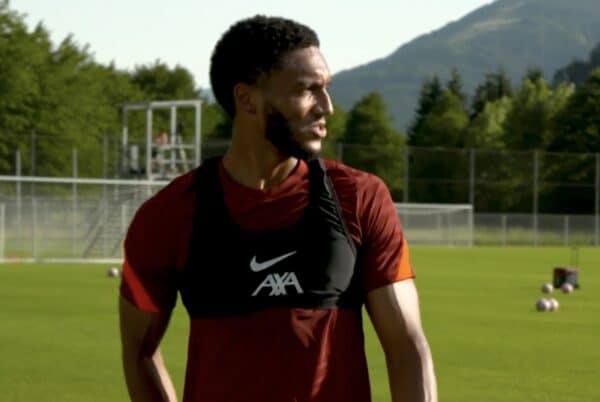 That’s right, the trio are back on the training pitch with the rest of the team and it’s a glorious sight indeed.

All three have not been fit for Liverpool since October last year and the long nine-month wait is finally over as they continue to make steps towards returning to match fitness.

Their presence and experience is a major boost from the first day of training onwards and now we have more centre-backs than we know what to do with! 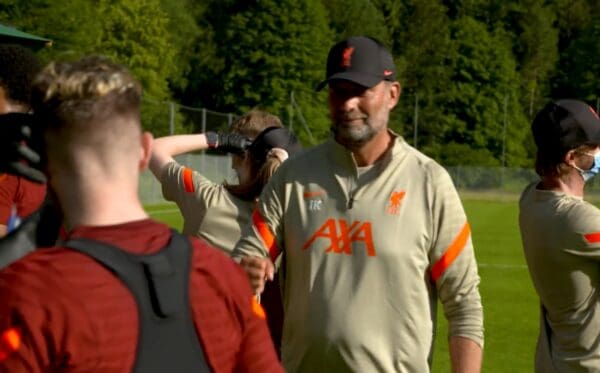 It’s typically about the glasses frames for Klopp, an iconic look for the boss through the years but you may need to do a double look this time as there are no glasses in sight.

Whether its a move to contacts or corrective surgery, it’s new and we like it!

Ox and Keita are ready 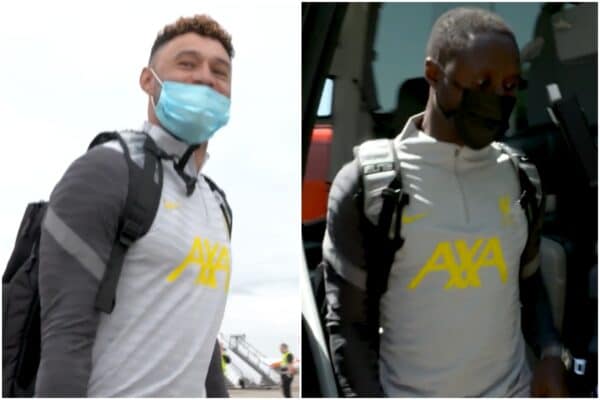 It was tough going for Alex Oxlade-Chamberlain and Naby Keita last season, the former a victim of the need for consistency after a disrupted start to 2020/21 and the latter still struggling to stay fit.

It all leads to a hugely important summer for the pair as they look to ensure they are more readily available and to catch Klopp’s eye.

Both have contracts that run until 2023 but you feel their future will be dictated by their influence in the upcoming campaign. 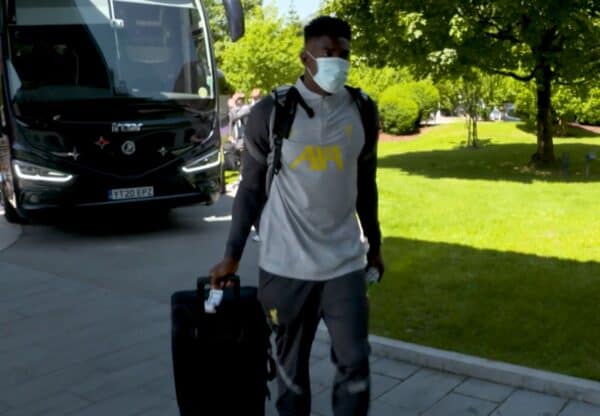 It is expected that the first three are to depart in the near future, with permanent moves being sought, but Minamino will be hoping to catch the attention of Klopp and put his hand up for a role at Anfield.

It’s been tough-going for the Japanese international but this summer could offer some stability to put his best foot forward. 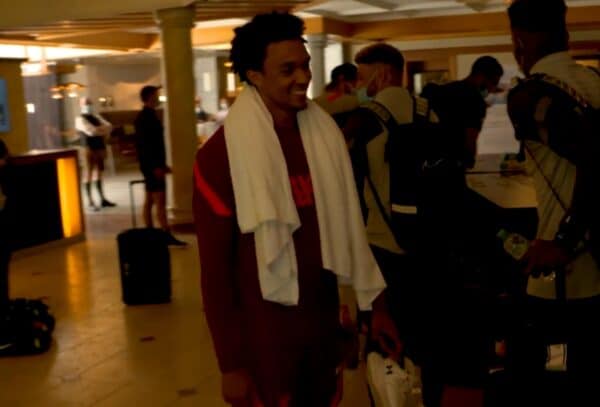 After trying some box braids over the summer, it’s back to what he knows best for Trent Alexander-Arnold.

Sauntering around the hotel lobby as the UK-based Reds arrived, there was an obvious reaction to his decision to revert to his previous look…and Jordan Henderson and Andy Robertson will be delighted!

First day as a Red 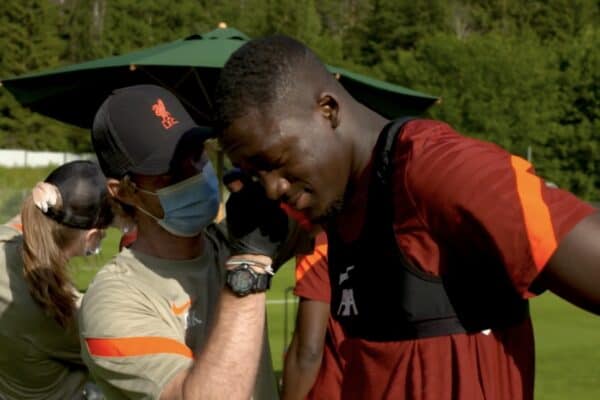 We got a first look at the 6ft 4 defender in the Liverpool colours and he offers an imposing presence, one that will no doubt grow as he settles in with his new team.

Konate was welcomed by those he crossed paths with, including James Milner, and the manager was clearly happy to watch on as the Frenchman got stuck into his lactate test.

An eye on the future

With so many senior faces to make a late appearance, 11 youngsters are in the mix and Klopp will be eager to see how they perform in different situations throughout the pre-season camp.

Harvey Elliott is the obvious talent that will draw attention, but the exciting Kaide Gordon, Mateusz Musialowski, Owen Beck and Conor Bradley could be in with a chance of featuring in pre-season friendlies.

Taking in the sights 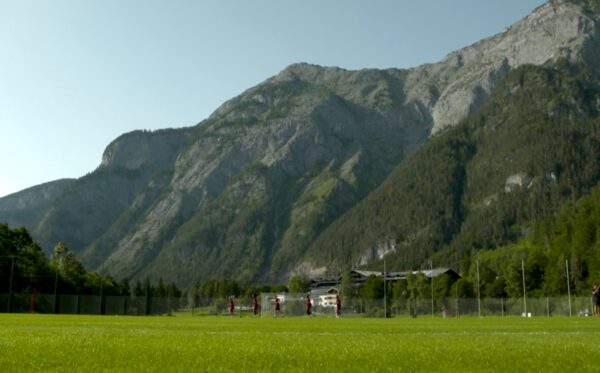 It’s no wonder Andreas Kornmayer was eager for the players to “enjoy the scenery” while doing their lactate test – think we’d take the trade-off to enjoy those views.

The sun, the mountains, the fresh Austrian air, it’s an idyllic setting for pre-season preparations and removes any outside distraction ahead of a big year to come.