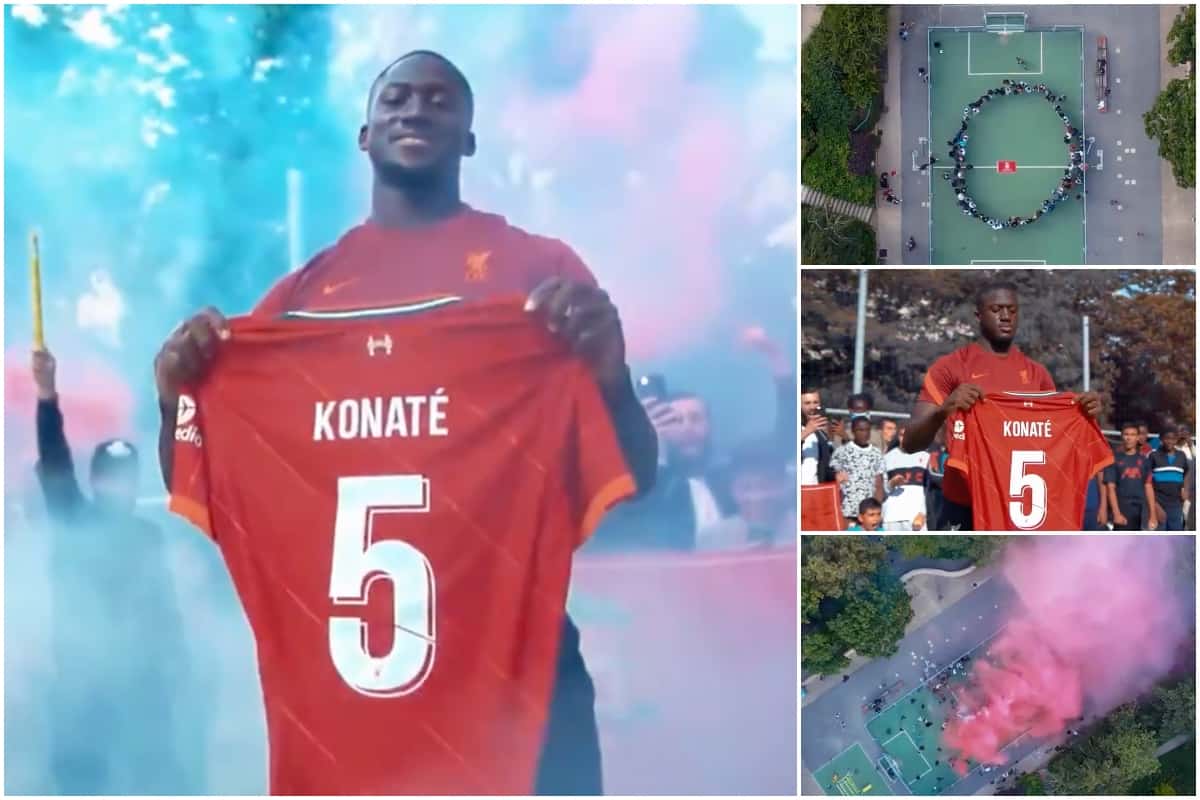 We’ve seen Ibrahima Konate in a Liverpool shirt, with his new number and now all that’s left is to see him in action. And the defender turned up the hype ahead of his first pre-season.

If the level of excitement had simmered following the announcement of his signing back in May, Konate has stirred it right back up.

The 22-year-old arrives at Liverpool with plenty of admirers and potential and will officially link up with Jurgen Klopp and co. on Monday for the start of pre-season.

Before then, Konate has released a video of his own in his native France showing off his new Liverpool No. 5 shirt with pyros and club flags:

He’s not even stepped foot on Merseyside since his switch but he’s got more than enough credit in the bank with his own announcement video – and he certainly looks delighted to be a Red.

It’s exactly what fans wish to see in a new signing and it’s clear that Liverpool have another confident character on their hands.

And the response on Twitter was everything Konate could have wished for and more:

Hasn't even kicked a ball for us yet and I'm all in on him. pic.twitter.com/RAqapNJlxH

I swear this is the most I’ve ever seen a player be made up about signing for his he’s made his own fuckin movie hahahahaha https://t.co/jy6zD1pwaK

I can safely say, based off this video entirely, we aren’t conceding a single goal next season.

He absolutely loves it! https://t.co/3V46u6UUrk

nah I’m gassed. our wavey-ness at an all time high. https://t.co/nsrmJgc0oS

This is absolute hype https://t.co/TYF74UOjoe

Nah his energy is fucking insane. I love it https://t.co/uDyaxEhQXY

Can just tell already the fans for us are going to love him seems a top lad and a great player! https://t.co/z1FIo0AQ1F

The 22-year-old will arrive to training off the back of a six-week break following his involvement with France in the U21 Euros, where he holidayed in both Dubai and France.

Konate is part of a 34-man squad who will reconvene in Austria for day one of training and includes Virgil van Dijk, Joe Gomez and Joel Matip.

There’s plenty to be excited about and Reds will be able to get a first look at the centre-back in the friendlies to be scheduled later this month while Liverpool are on the continent.