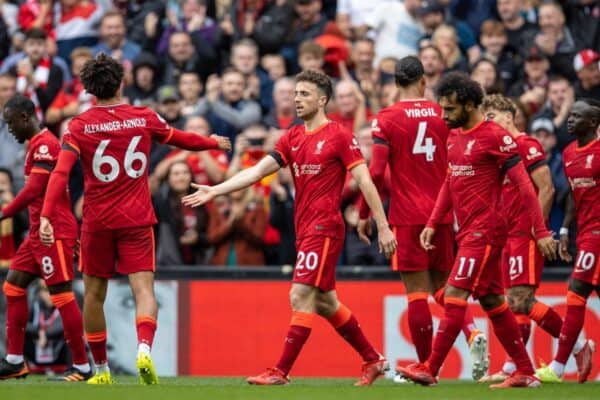 The Liverpool players revelled in the atmosphere provided by a full Anfield as they saw off Burnley in the first home game of the season, winning 2-0.

Busy even when he didn’t have saves to make. Often out to clear his lines, but was also very composed when playing shorter passes into midfield or to defenders.

Made a save from Chris Wood which looked easy but was good positioning nevertheless.

Was clattered by Ben Mee in a challenge at the end of the first half but it didn’t affect him. Remained calm in possession and composed as the last line of defence, as a sweeper as well as in goal.

Made a nice save from Ashley Barnes late in the game for good measure, even though the Burnley forward was offside.

The highlight of his game was the really neat pass to Mane for the second goal. Nice touch and spin on the ball to take it quickly into the goalscorer’s path.

Some quality passing in general play, specifically one ball through midfield to Jota in the first half.

Was always a threat down the right, offering that right-footed balance outside Elliott and Salah, and worked well in midfield which is where he found himself for that assist.

Wins loads of balls on the deck and in the air.

Looked like one of the best players on the pitch aerially despite Burnley‘s reputation in this part of the game.

Finished the match with eight aerial duels won, more than any other player.

As cool and collected as ever, and also battling on the occasions when such play was called for.

Outplayed the Burnley forwards on the ground with his football ability as well as physically.

Made it through the full 90 minutes in a fairly physical game which will be great for his confidence post-injury.

Provided the assist for the opening goal for Jota with a pinpoint cross from the left.

Tracked back and inside well as Gudmundsson ran from outside to in and left something on his opponent for good measure as he did, though the Icelander made the most of it.

Offered good delivery from corners from the left, finishing the game with four key passes, and generally battled well.

Received a good ovation from the Kop and the rest of Anfield as he was substituted in the last 10 minutes.

Made his presence known as captain, barking at Elliott when the teenager dallied under pressure, giving similar treatment to Tsimikas later in the game.

Went to each stand at the end of the game to thank the fans for their support.

Finished the match with the best pass success of any player bar Jota, with 90 per cent.

Useful in the Wijnaldum role even though he could have done with being a bit tidier at times.

Showed he is able to do just that when getting out of a tight situation on the left, playing the ball between the Burnley player’s legs and starting an attack from a tricky situation.

Was heavily involved in the game and Burnley resorted to fouling him early on.

Played a really nice pass for Salah to score but the strike was ruled out for offside.

Sent in a good cross for the Egyptian having found himself out on the left on a counter-attack and it almost led to a goal.

Was involved in the second goal with a great bit of control from Van Dijk’s long pass before feeding Trent.

May have held onto the ball a bit too long at times in the opening stages but soon grew into the game and into the team.

A constant threat cutting in from the right, even though he wasn’t able to get his goal on this occasion.

Headed wide from a Trent cross early on but was this was just a sign of things to come.

He managed to get in front of Ben Mee to get on the end of Tsimikas’ cross and head home Liverpool’s opener.

Was energetic up front, and dropped deep at times to confuse the Burnley defence.

Grew into the game in the second half, giving Nick Pope a couple of easy saves to make before finally turning one past him from Trent’s excellent pass.

Prior to that he had shot just over from Alexander-Arnold pass, and after turning Matthew Lowton just couldn’t get enough on his shot to test Pope.

Struggled to make an impact in the first half, but certainly did in the second with his good finish of a spinning ball from Trent’s pass.

A big cheer as he entered the field for his Anfield debut in front of fans, and his name rang around the Kop shortly after.

Filled in at left-back for around a minute.

Made the bold call of giving Elliott his first Anfield start and it paid off as the teenager impressed and remained on the pitch for the whole game.

His decision to choose Jota over Firmino was also justified as the Portuguese opened the scoring.

Left it late to make subs but there was no reason to, really, when some of these starters will benefit from a good run of minutes at this stage of the season.