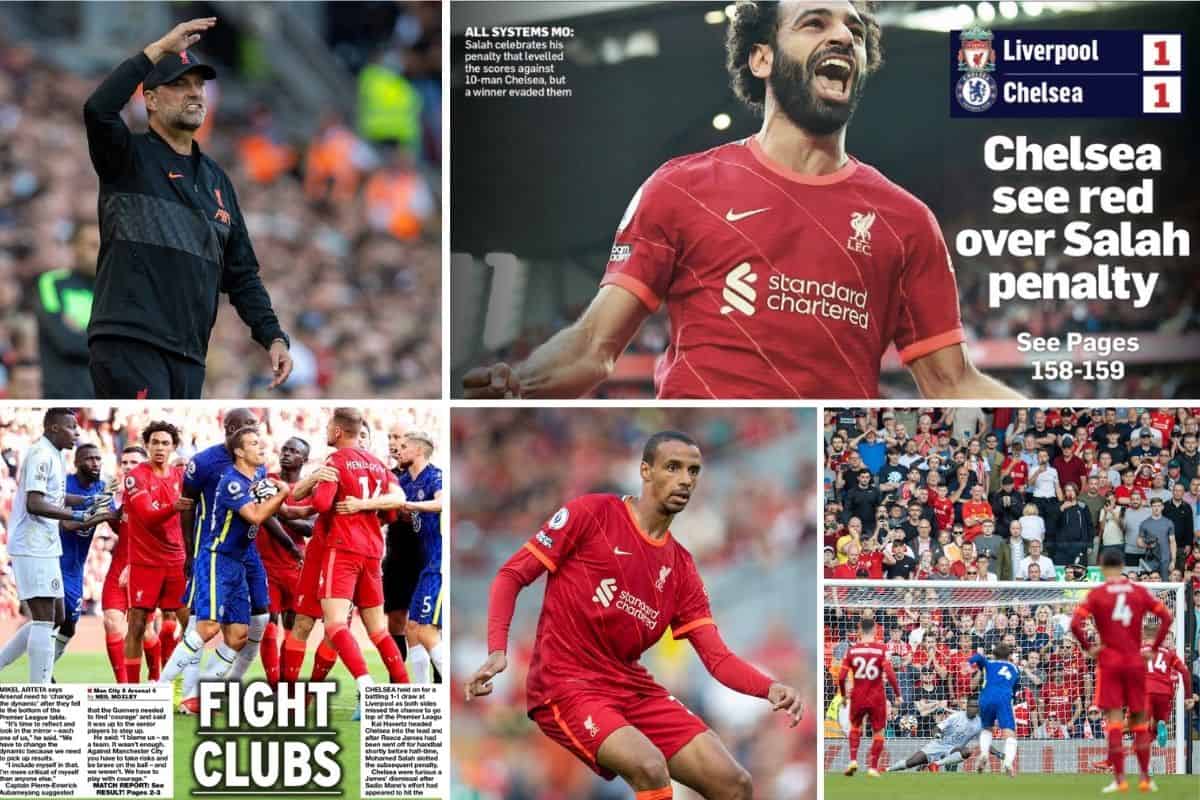 The watching media were left unconvinced by Liverpool’s performance in their 1-1 draw with Chelsea, as they fluffed their lines in the final third.

Jurgen Klopp‘s side faced an early battle against a fellow title contender at Anfield, with a fascinating game unfolding.

Kai Havertz gave Chelsea the lead with a clinical header, but Reece James was sent-off for a handball on the line and Mohamed Salah scored the penalty that followed.

Liverpool were left frustrated in the second half, however, as the 10-man visitors defended superbly, leaving the Reds having to settle for a point.

Here’s how the media reacted to the result.

Liverpool looked short of attacking options, highlighting the need for a new signing to come in…

“The grumblings will continue as we hurtle towards transfer deadline day, and Klopp’s assertion that Tuesday is likely to be a quiet evening in the AXA Centre’s corridors of power might only increase the volume of those clamouring for new blood.

“Roberto Firmino, one of three changes for this one, was unable to get through the first half before he was replaced for Diogo Jota, meaning Klopp’s biggest goal threat off the bench was summoned before 45 minutes had been played.

“Klopp’s indication that Firmino was injured, post-match, only furthers the need for additional bodies, even if the muscle issue will not be long term.”

And the Guardian‘s Jonathan Liew touched on the emotional attacks that see Liverpool come up fruitless:

“There were hopeful long shots that made little sense except on the emotional level, corners that brought the Kop to the brink of combustion before inevitably being headed away.

“But despite enjoying 68% possession and 14 shots after the break, Liverpool departed without ever really threatening to penetrate the layers of blue massed before them.”

There was no denying that it was a disappointing result for the Reds, given the circumstances… 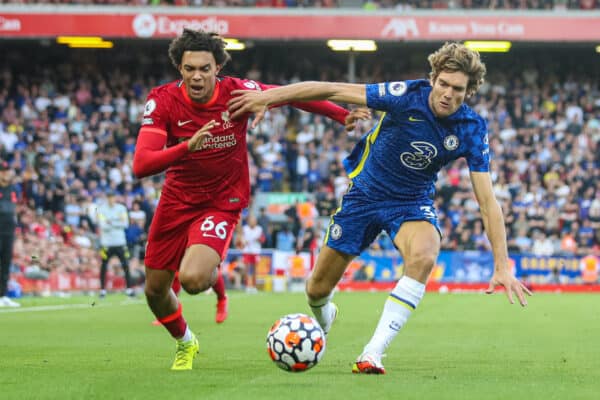 Goal‘s Neil Jones believes Klopp and his players will rue the slip-up:

“Liverpool, though, will take frustration to bed with them this evening. They huffed and they puffed, having forced themselves level, but ran out of steam as the second half wore on.

“They had their moments and they dominated, of course, but this was no hard luck story. Jurgen Klopp’s side just didn’t do enough.”

Dominic King of the Mail, meanwhile, felt Liverpool became more clueless as the game went on:

“Liverpool had everything they could have wanted: attacking The Kop with their tails up, a numerical advantage and the belief that, eventually, an opening would arrive. For 15 minutes after the restart, it seemed a question of ‘when’ not ‘if’.

“Chelsea were so deep at times, Tuchel, in his technical area, resembled a man trying to bail water out of a rowing boat with a bucket, as he manically waved his arms. Amid the cacophony, you could almost his screeches of ‘Up! Up! Up!’

“And it worked. Liverpool, for all their tweaks and changes, eventually ran out of ideas. A point a piece, then, but some draws are more equal than others. That’s why Tuchel was smiling.” 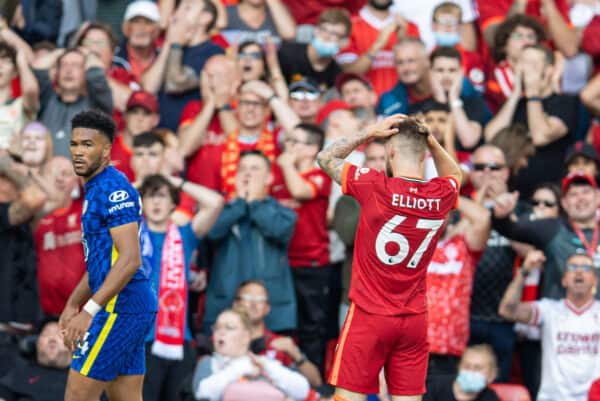 The Telegraph‘s Chris Bascombe was another who thought Liverpool ran out of steam, but was more positive about the Reds’ title chances:

“To their credit they (Chelsea) regrouped and gathered their composure the longer the second half proceeded, often looking like they could prey on Liverpool’s increasing desperation, sensing the onus was on the hosts to make the numerical advantage count, still mounting the occasional counter-attack.

“Ultimately, Tuchel’s second half blueprint succeeded, Liverpool running out of ideas, Chelsea celebrating the point as if it was the statement they had to come to Merseyside to make.

“Whatever the outcome, no-one will bet against Chelsea and Liverpool still being in contention when next they meet. On this evidence, it will be a meeting not to be missed.”

The Guardian‘s Ed Aarons beomaned Liverpool’s profligacy, also admitting that they could have lost on another day:

“What will be hugely frustrating for Klopp is that his side then failed to break down a stubborn defence in the second half despite playing against 10 men, with Chelsea showing once more that they have plenty of stomach for a fight under their German manager that should serve them well for what lies ahead in this campaign.

“Despite dominating possession in the dying stages, a tame shot by Salah with his right foot that dribbled towards Mendy’s goal with five minutes remaining summed up a frustrating day for Klopp. But he will know it could have been much worse.”

Many felt it was a superb game, however, and another reminder that proper football is back… 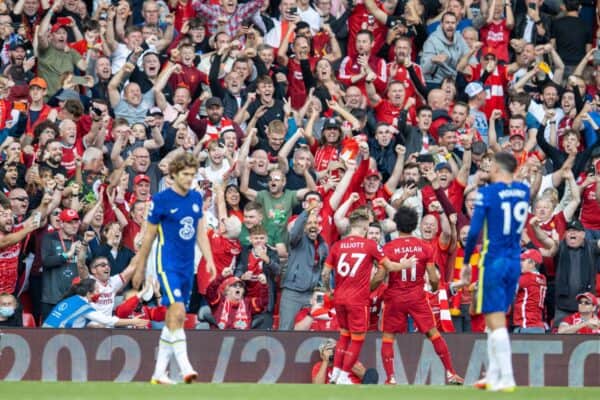 This Is Anfield‘s Henry Jackson claimed it was the best atmosphere since the Champions League clash with Atletico Madrid:

“Frankly, it is hard to envisage such a passionate, high-octane game taking place last year.

“This was what proper football feels like and it made for captivating viewing – a polar opposite of last season’s 1-0 loss in front of an empty stadium, which looked like a completely different sport was being played.

“It does feel as though the world is slowly nearing some sort of normality again and this was the most normal a Liverpool game has felt since Atletico Madrid in March 2020.”

Jones echoed that sentiment, hailing the brilliance of the Premier League:

“It was some spectacle. How we have missed nights such as these; nights of danger and jeopardy, of passion and intensity. A proper contest between two proper sides.

“As for Liverpool, they can reflect on an opportunity missed. No need for despair, just disappointment.

“But hey, the Premier League is back. And didn’t we all enjoy that? 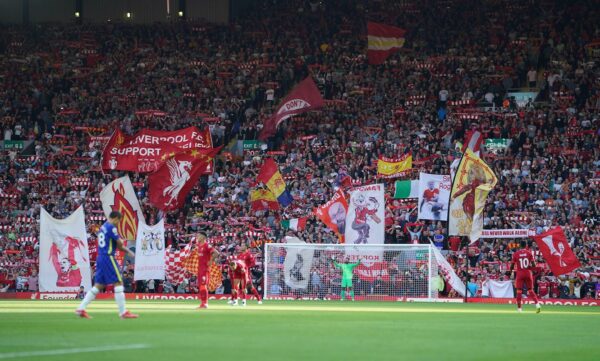 Finally, Jonathan Northcroft of the Times waxed lyrical over the match, praising both teams’ efforts:

“Goals please the casual consumer of football but the true connoisseur feasts on intensity and this match did not need a spectacular score -line to grab your throat, stir your guts and sear itself into the memory. There was the pace and skill of Liverpool, the intelligence and resilience of Chelsea and the sense of two teams and managers, at the top of their craft, holding nothing back as they contested the points.

“It was an early-season encounter played like a title decider, where every touch, every tackle, every break, every block felt like it really counted. Liverpool, so good on the right through Mohamed Salah and Trent Alexander-Arnold, and so shrewd in the middle with Fabinho, looked close to their 2019-20 form — and in Harvey Elliott may have a new prodigy.”