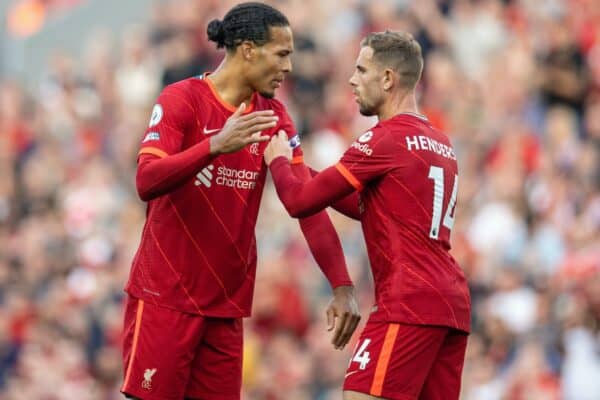 Liverpool will play six times in the space of 17 days this month, with the Premier League, Champions League and League Cup all bringing different tests in September.

It has been a positive start to the season for the Reds, with victories over Norwich and Burnley followed by a frustrating but reasonable 1-1 draw with Chelsea.

The end of the transfer window came with disappointment for many supporters, but Jurgen Klopp and his squad will be eager to prove they have enough to challenge on all fronts without further additions.

September is the first of many busy months throughout the campaign ahead, with Liverpool to play a game every 2.83 days on average.

Here are Liverpool‘s key dates for the diary in September, including fixtures for the under-23s, under-19s, under-18s and women’s sides.

The first international break of the season is upon us, and Liverpool have seen 31 players called up for duty including 12 of Klopp’s senior squad.

Four who won’t be involved, though, are Egypt’s Mohamed Salah and Brazil trio Alisson, Fabinho and Roberto Firmino, with the club blocking their call-ups due to quarantine rules upon return to the UK.

The break brings Virgil van Dijk‘s Netherlands comeback, while Jordan Henderson and Trent Alexander-Arnold will both be in action for England.

Liverpool are required to submit their squad for the Champions League group stage to UEFA by midnight on September 2, ahead of the upcoming clashes with Atletico Madrid, AC Milan and Porto.

A maximum of 25 players can be named on ‘List A’, at least two of which must be goalkeepers, with a minimum of eight ‘locally trained’ players needing to be registered in order to name a full squad.

An unlimited number of eligible youth players can be named on ‘List B’ as late as midnight on the day before a fixture – which means the likes of Curtis Jones and Neco Williams don’t need to be on ‘List A’.

Liverpool’s first game back after the break is a tough one away to Marcelo Bielsa’s Leeds, who will be looking to improve on a tough start to the campaign.

Leeds have so far lost 5-1 to Man United and drawn with both Everton and Burnley in the Premier League, sitting 15th in table after the first three games.

As it stands, the Brazilian FA are threatening action through FIFA that could see Alisson, Fabinho and Firmino all ruled out of this game due to Liverpool blocking their international call-ups.

A Champions League night, under the lights, in a full Anfield. It’s what we’ve all been waiting for.

The first games back in the Premier League have given a taste of the Anfield atmosphere at its best, but Liverpool can expect that to improve for the Group B opener.

AC Milan are the opposition, for the first time in a competitive game since the final in 2007, with Olivier Giroud their new main man up front.

No doubt Zlatan Ibrahimovic’s tiresome man-child schtick will still manage to dominate the buildup, though…

Three days after the visit of Milan, Palace will arrive at Anfield as focus switches back to the Premier League.

Like Leeds, Palace have also endured a poor run of form to kick off the campaign, with two points taken from three games, and they host Tottenham in their game prior to the trip to Merseyside.

September will see Liverpool enter the League Cup at the third round stage, which heralds a second trip to Norwich in just over a month.

The tie could see Klopp rotate his side to give the likes of Ibrahima Konate, Joe Gomez, Kostas Tsimikas, Takumi Minamino and even youngster Kaide Gordon an opportunity to impress.

It could make the game an interesting one to watch – with the Reds surely favourites either way.

Liverpool will then make a first-ever trip to Brentford‘s new stadium for a first meeting with the Bees since 1989.

Thomas Frank’s side are in the Premier League for the first time and have impressed so far, opening the campaign with a 2-0 win over Arsenal that saw ex-Reds youngster Sergi Canos score.

Brentford are unbeaten after three games, and could present a tough test for Liverpool on the road.

The month ends with a sixth game in 17 days, with Porto familiar opposition in the Champions League.

Liverpool have played the Portuguese side four times in the past three years, winning three and drawing one for an aggregate score of 11-1.

Marko Grujic joined Porto in a £10.5 million deal earlier in the summer, which provides a swift reunion for a player who made just 16 appearances over four-and-a-half years with the Reds.