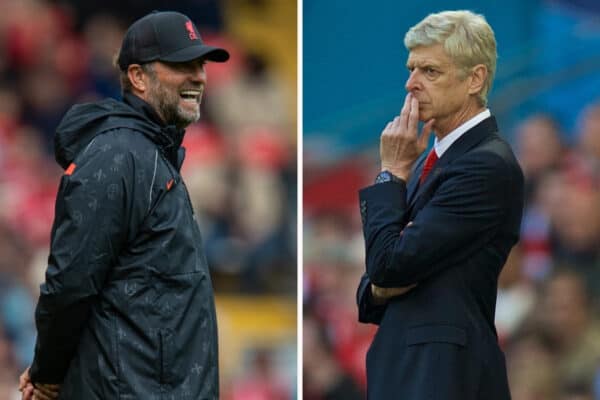 With Arsene Wenger pushing ahead with FIFA’s plan to hold a World Cup every two years, Jurgen Klopp‘s comments on their meeting at Kirkby are worth noting.

Wenger is set to reveal more details about the proposals for a biennial World Cup this week, as he meets a number of former players and coaches in Qatar.

Ronaldo, Peter Schmeichel, Avram Grant, Youri Djorkaeff, Tim Cahill and Roberto Carlos are among those to have met with the Frenchman in Doha, with Wenger also having toured a range of clubs in recent months.

The prospect of a World Cup every two years will be opposed by UEFA, as it clearly infringes on their calendar, but Wenger has insisted there would be no more games added and there could be fewer international breaks in a domestic season.

Understandably, there are detractors, and it remains to be seen whether the plans – helmed by Wenger as chief of global football development – will eventually be put in place.

It is unclear where Klopp stands on the matter, but last month the Liverpool manager detailed a recent visit to Kirkby for Wenger as he handed Klopp, Alisson, Virgil van Dijk, Thiago and Trent Alexander-Arnold their FIFA Men’s awards for 2020.

“He is a very nice guy, a very nice, impressive person. But he was actually here as a FIFA representative,” Klopp told reporters at the time.

? It was a special day at @LFC's Training Centre

“We had time together, but it was more that he showed me the things that FIFA want to do, structure-wise, in the future, and wanted to know my opinion.

“There was no real time, then, on top of that. I didn’t write any questions down to ask him.

“I never did that, to be honest. Not only with him, because I’m a big believer in that you always have to find your own way to deal with the specific problems over a day.

“We had a good laugh as well, about similar problems – he had the problems I have now. He is not overly disappointed about not having these problems any more!

“It was just a nice talk, but he wanted to know my opinion about the FIFA plans.”