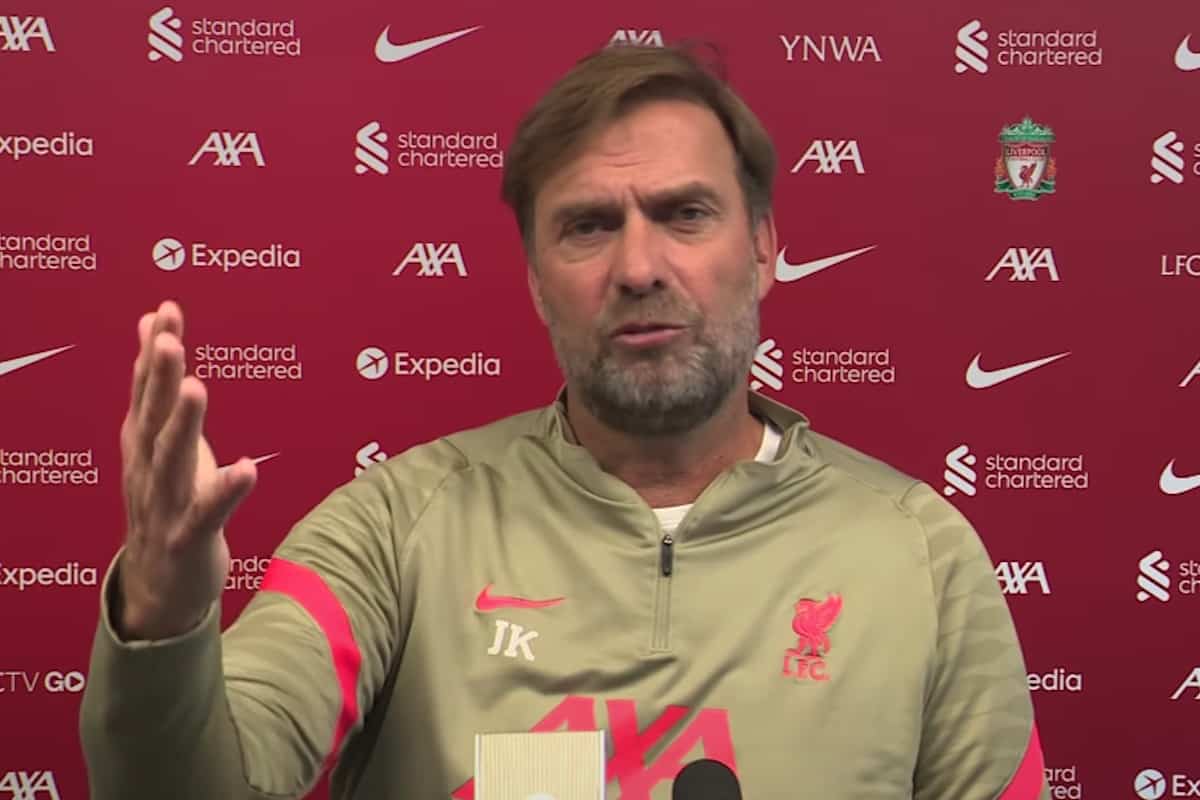 Jurgen Klopp knows his side need to be “brave and cheeky” at the right moments against Man City, a clash that he knows Anfield can play a huge role in.

Here are five key things from Klopp’s press conference, which was held at Kirkby:

It sure is, Jurgen.

After three away games in a row, Liverpool are back on home soil and while Man City are the visitors, the boss knows Anfield offers a boost like no other against a side of their quality.

Pep Guardiola’s team lost 2-0 in midweek to PSG, but were not without an abundance of chances and the Reds will still need to be at their very best.

“When you think about the quality of the PSG team, and then the way how Man City dominated them, that says a lot. That says a lot about their quality.

“We have to play a proper football game, I would say to have a chance but it’s Anfield. And we are really looking forward to it.”

With Trent Alexander-Arnold out of the clash due to a calf injury, the boss knows he has three options in James Milner, Joe Gomez and Neco Williams at right-back.

But he also threw a little spanner in the works by saying: “We could change system…we have time to train this week.”

It hints at three at the back with wing-backs, or potentially a 4-2-3-1, but it could all just be mind games for one Guardiola – who is no stranger to them.

3. Red-list solution not a “real solution”

If fully vaccinated, they will return to a club facility for a 10-day quarantine but can play and train once a day – a move that left Klopp feeling the ‘solution’ was an afterthought.

“That would mean for the players after the international break they go for 10-12 days with the national teams, and then they go another 10 days away from their families into a quarantine.

“That’s 22 days and two weeks later there is the next international break. It doesn’t sound to me like a real solution.”

4. Klopp would not be a good James Bond… 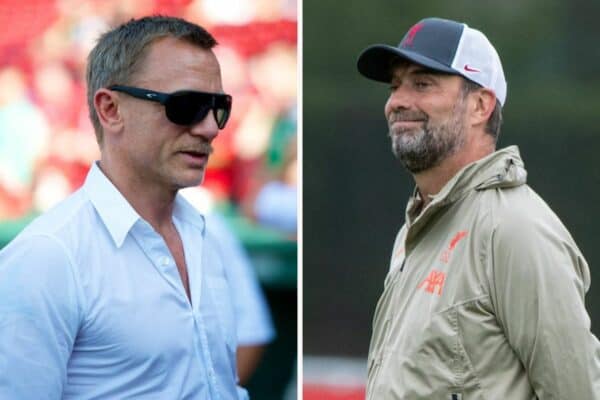 Daniel Craig is a well-known Liverpool supporter and has readily been spotted at Anfield and on various pre-season tours in recent years, meeting Klopp once or twice along the way.

And the actor, who is to relinquish his role as 007 following the release of No Time to Die, was quick to say that the manager would make a good Bond, but the boss, in hilarious fashion, offered an opposing argument.

“I would be a really bad James Bond, if I walk out of the water in swim shorts, that would be the moment the whole world would switch off!

“We all have our jobs to do in life, he has to save the world, I have to help Liverpool.”

The jack of all trades and better than a master of one would accurately surmise James Milner and what he brings to the table, with right-back the latest position he’s been asked to fill.

While not a fan of the role, he more than gets the job done and Klopp knows just how important his No. 7 is to his side whether on the pitch or off it.

“He doesn’t like the position [right-back] but he plays it exceptionally well because he is a smart footballer.

“He likes to be involved and that’s always why he thought he has to play in the middle of the park, but the way we play the right-back is quite influential.

“He’s just a very important part of the squad. Not only if he plays, but when he plays as well. Incredibly influential.”