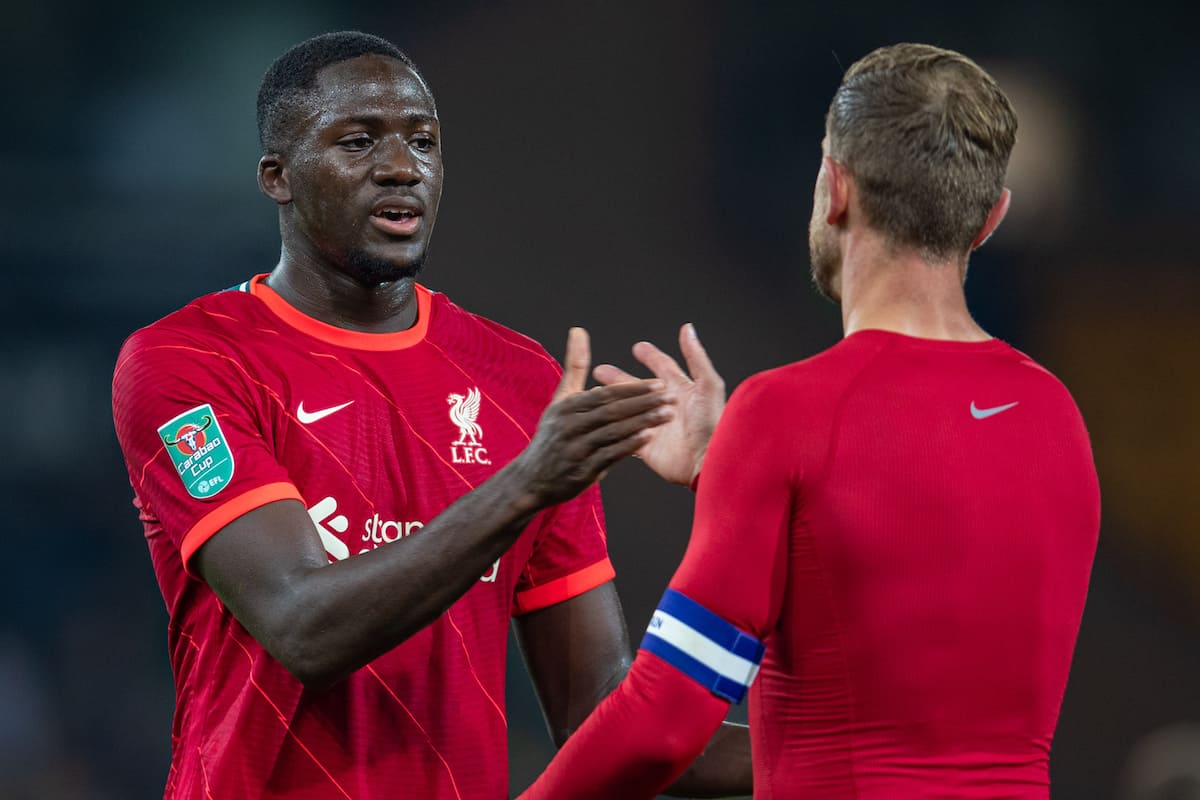 Joel Matip has repeated the advice of Andy Robertson and Pepijn Lijnders as Ibrahima Konate settles “really well” at Liverpool, predicting a “good connection” to come.

It is now over four months since Konate joined the Reds from RB Leipzig, but the £36 million summer signing has only made two appearances so far.

The Frenchman started alongside Virgil van Dijk in the 3-0 win over Crystal Palace, before being joined by Joe Gomez for the League Cup victory of the same scoreline at Norwich.

Matip has been preferred as the first-choice partner to Van Dijk, and rightly so, given their impressive run of form together in the first months of the season.

Eventually, though, Konate is expected to take up a more regular role in the starting lineup, with the 22-year-old primed as a long-term successor to either, or both, Van Dijk and Matip.

There is no surprise that Jurgen Klopp is taking a cautious approach to his transition into the side, given how long it took the likes of Robertson and Fabinho to adjust.

And speaking to the Liverpool FC magazine, Matip echoed this sentiment despite pointing out that Konate is “already going really well.”

“It always takes some time to settle in general and in the defence to get a good connection. It needs time before I know how he will react and he will know how I react.

“We have trained a lot together and it will always need some time next to a new player, but he is already going really well.”

Konate finds himself in a fortunate position as he comes into a Liverpool squad who have already found success, with it easier to settle into a winning environment than one still building.

Robertson and were integral signings to that rise, and speaking prior to Konate’s second outing for the Reds against Norwich, Lijnders outlined how the left-back has helped him in the process.

“Robbo said it to him: ‘All of us, we need time to adapt to our style’,” Klopp’s assistant explained last month.

“Virgil was probably one of the only ones who came in [immediately], but he still needed to adapt.

“He adapted with immediate games. He started playing and adapted to our style with time – in an unbelievable way, like he was like one of the big, missing puzzle pieces.

“So Robbo explains it, and that’s how they take care of him.

“He’s settling in well, he’s a beast in terms of physicality, he can catch so many players, he’s strong in the air, has a really good buildup, so strong offensively as well.

“But he’s still so young, so it’s great to see him make his debut, get it out of the way and move on.”