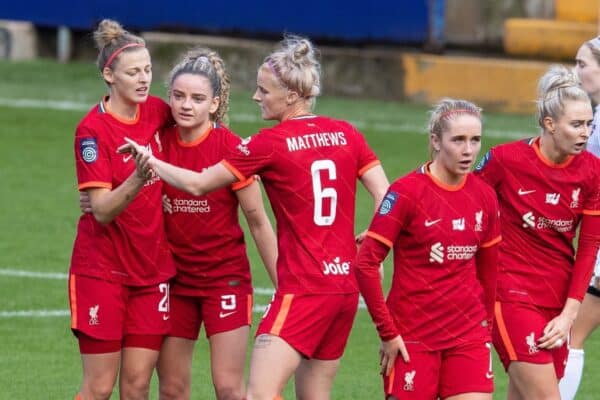 Liverpool FC Women made it five wins in a row and seven unbeaten as they sealed a 2-0 victory over Lewes, with striker Leanne Kiernan netting her sixth goal in four games.

The Reds are seeking promotion to the Women’s Super League at the second time of asking this season, and under new manager Matt Beard they are producing a convincing bid.

After defeat in their opening game at home to London City, Liverpool have not lost a game in all competitions, with Sunday bringing their fifth win in the league.

It came at home to Sussex outfit Lewes, with on-fire striker Kiernan again the key woman as she struck both goals in a 2-0 win.

As the rain subsided for the clash at Prenton Park, those in attendance were rewarded with an entertaining start, with Kiernan netting in the 17th minute.

Leighanne Robe’s long ball allowed Rhiannon Roberts and Melissa Lawley to connect, and with the latter’s cross spilt into her path, Liverpool’s No. 9 made no mistake.

Efforts from Missy Bo Kearns went close either side of chances for Lewes, before Kiernan doubled hers and Liverpool’s tally with a smart finish on the turn.

There were opportunities for both Liverpool and Lewes in the second half, but Beard’s Reds held on for a fifth consecutive victory – their fourth on the trot in the league.

Liverpool sit second in the Women’s Championship as a result, two points behind leaders Durham, with their next outing to come against former manager Neil Redfearn’s Sheffield United in the on Wednesday night.

For Kiernan, her double made it six goals in eight appearances for the club she joined from West Ham in the summer, with all six of those coming in her last four outings.

She is comfortably the Reds’ top scorer, with the 22-year-old the inspiration for her team-mates as they push for a place back in the top flight.