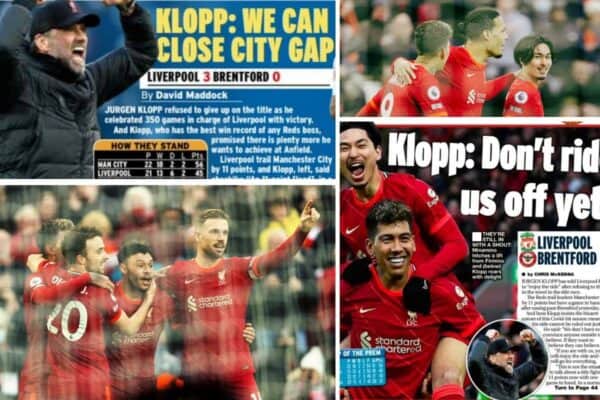 The media lauded the importance of Liverpool’s 3-0 win over Brentford, suggesting the Premier League title race is still alive.

The Reds knew a win on Sunday would get them to within 11 points of Premier League leaders Man City with a game in hand, as they refuse to give up on the title.

Liverpool achieved that goal with ease, with Fabinho, Alex Oxlade-Chamberlain and Takumi Minamino making up an eclectic mix of scorers.

It wasn’t always a vintage Reds showing at Anfield, but the second-half performance was impressive against a Brentford team who caused the hosts few problems.

Some feel there is still some hope of glory in May…

Goal‘s Neil Jones believes Klopp’s men are not done and dusted just yet:

“The Premier League still has a title race, just. Twenty-four hours after Chelsea saw their hopes extinguished at the Etihad, the Reds kept theirs alive with a hard-fought, but much-needed, 3-0 victory over Brentford at Anfield.

“Suddenly, the doom and gloom is lifted, the Merseyside sky a little brighter than it looked 48 hours ago. Klopp was smiling and so were his players.

Dominic King of the Mail was of a similar thought process:

“Perhaps it wasn’t the kind of afternoon that would have had Pep Guardiola refreshing his phone and anxiously glancing for updates.

“But as the goals started flooding in at Anfield once again and as the rhythm and energy returned to Liverpool’s play, particularly during a dominant second half display, Manchester City’s manager will have duly noted that nothing has yet been settled in the title race.

“It is, of course, long odds against Liverpool overhauling their bitter rivals but all they can do is keep winning to at least be in a position to ask a question.”

The Telegraph‘s Chris Bascombe was less optimistic, however, even if the win did steady the ship:

“At least the race to be Premier League runners-up promises to be a thriller, Liverpool and Chelsea matching each other stride for stride.

“Shame for the neutrals that Manchester City are over the horizon. Liverpool retained a glimmer of hope catching the runaway leaders with victory over Brentford, climbing above Thomas Tuchel’s side in the process.

“More likely they have consolidated the likelihood of a comfortable Champions League qualification.”

Others focused on the displays of certain individuals…

Tom Blow of the Mirror felt Oxlade-Chamberlain had a mixed game at Anfield:

“Oxlade-Chamberlain is capable of playing anywhere in midfield and on the right of a front three, stepping in to replace Salah against Brentford.

“The Englishman struggled to offer Liverpool the pace they needed to get in behind a stubborn defence, but he took his goal well with an excellent diving header.

“Right now, it’s unclear where his future lies. He has 18 months remaining on his existing deal and is unlikely to become a regular at Anfield any time soon.”

This Is Anfield‘s James Nalton was intrigued by a fluid front three in the absence of Mohamed Salah and Sadio Mane:

“It looked like Alex Oxlade-Chamberlain would be the player to come into the midfield in place of James Milner, with Curtis Jones operating on the left of the front three instead of Takumi Minamino.

“Instead, Diogo Jota moved from the right to the left, with Oxlade-Chamberlain coming in on the right and Jones slotting into midfield.

“In theory, this added more speed and directness in two areas of the pitch, and this was on show when Oxlade-Chamberlain stole in front of Sergi Canos to get on the end of Andy Robertson’s cross for the second goal.

“By the end of this game, there had been three different versions of the front three as a result of substitutions, and there will no doubt be more tinkering to come in the next few weeks – especially if Oxlade-Chamberlain’s ankle injury keeps him out.”

Melissa Reddy of Independent praised Oxlade-Chamberlain for seizing his opportunity without key figures around:

“Klopp used his pre-match briefing and programme notes to remind the world – and instructively his players – of the wonder they have seen without Mohamed Salah and Sadio Mane, who are away on African Nations Cup duty.

“Their absence was defining the narrative around Liverpool and the manager sort to redirect it for psychological reasons, recalling the 4-0 Champions League triumph over Barcelona as a start.

“It was an opportunity, Klopp said, for others to step into the spotlight. Alex Oxlade-Chamberlain, stationed in the front three, did exactly that by scoring the safety goal and creating three chances in a dynamic performance despite Brentford’s obstruction.”

Klopp’s celebrations at the end were significant, following a tough run…

“Klopp even indulged in his trademark fist pumps to the Kop at full-time. It was a sign that he still believes there is a title to be won.

“Everyone else still needs convincing.”

King also felt there was more meaning to the Liverpool manager’s reaction than usual:

“Liverpool, though, got there in the end with three unanswered goals from three unexpected scorers and this is just what Jurgen Klopp wanted to see as his regains confidence.

“Don’t doubt how important this was to him: three fist pumps to The Kop at the final whistle demonstrated his glee.”

Finally, Reddy claimed Klopp’s happiness was proof of the magnitude of the result, on his 350th match in charge:

“Jurgen Klopp burst towards the Kop, furiously fist-pumping to illustrate the importance of victory against Brentford.

“This wasn’t a blockbuster game, nor blockbuster opponents but Liverpool’s manager knows the fight and three points can be vital signs for the rest of the season.”