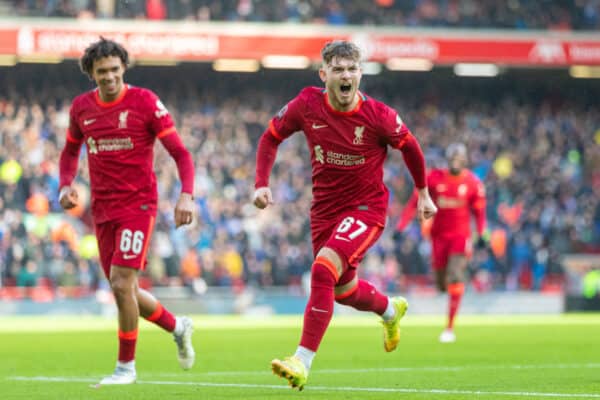 A place in the fifth round of the FA Cup secured, where another home tie awaits, against Norwich City; as pleasing as that is, Sunday’s best was all about the return of Harvey Elliott and the Anfield unveiling of Luis Diaz.

Neither Elliott nor Diaz were meant to be seen at Anfield right now. One has fought back from a dislocated ankle in an obscenely swift amount of time, while the other was earmarked for a summer arrival until Antonio Conte started to sniff around him.

Thrown on simultaneously in the 58th minute, Elliott and Diaz each made a vital imprint on the outcome of a game that had been a largely frustrating one up until five minutes before their entry to the pitch.

No half measures with his lineup, without a game for a fortnight Jurgen Klopp had no responsibility whatsoever to rest any of his biggest names, but it didn’t stop Cardiff from being a belligerently stubborn, if largely offensively incapable, set of opponents.

Encamped in the Cardiff half for most of the first period, Liverpool found themselves confronted by a compressed cloud of players in all blue, which left the repelled players in all red to take pot-shots from distance while snatching at the small number of opportunities that fell their way when closer to goal.

In each instance, there was an untidy waywardness to Liverpool’s attempts to score during the first half, although they did have hold of the ball on an almost exclusive basis.

Ultimately, Diogo Jota’s mastery of the air proved to be the way to make the breakthrough, and the last half hour was like a separate act entirely – one which was all about the uplifting return of Elliott, a return which could not have gone any better had the script been written.

Everything we’ve heard of Elliott’s path back to fitness has been enveloped in positivity, and he oozed more of it as soon as he took to the pitch in his comeback game.

This wasn’t the performance of somebody with self-doubts over how his body was going to react to that first challenge for the ball, that first impact with an opposing player, this was as if he had stepped through a time tunnel and his last appearance had been just a few days earlier.

It was a mightily impressive 32 minutes, plus injury time, and he took his goal magnificently.

Sharing the limelight of the latter third of the game, Diaz gave us the perfect advert for what he will offer.

No shortage of skill, an esoteric eye for the playground pass, bags of confidence and the capability to take the breath away, be that with a dip of the shoulder and a roll of the ball in the opposite direction or dropping to the floor in a genuinely worrying manner via an innocuous challenge.

You could have cut the atmosphere with a spoon until Diaz got to his feet, as team-mates, supporters, manager, coaching staff, club owners and accountants all momentarily thought we’d seriously pranged the new purchase at the first time of asking.

It had a similar, if fleeting, feeling to the one you get as a teenager, when irreparably damaging your parents’ car a day or two after passing your test when out and about trying to impress your non-driving mates on totally unnecessary expeditions to Southport that you wouldn’t have dreamt of undertaking a week earlier.

That blissful era, when you drive everywhere because now you can.

Positives aplenty throughout a January that was meant to torpedo our season, an increasingly healthy-looking squad in February is now set to be boosted by the returns of Sadio Mane and Mohamed Salah, after their duel in the Africa Cup of Nations final on Sunday night.

The trick for Liverpool now is not to relax.

The foot needs to remain on the accelerator if we are to end the campaign with the trophies that we are capable of obtaining. Aim high, both in terms of our ambitions and the standards required to realise them.

Away from the pitch, Sunday’s soundtrack was supplied by the travelling Cardiff supporters, who were at Anfield in their unsurprising numbers.

A big day out for them, it meant the police helicopter was up, rather than the drone, and the quotient of horses on duty was higher than usual, in what I class to be the Birmingham City scale of potential for disquiet.

This is a very specific level of leeriness, where the away day is like a school field trip for adults, when they get a bit too overexcited and are prone to overblown gestures, like the fella who was banging away on the doors of the festival style toilets near the LFCTV containers on Anfield Road before running away.

Every emotion and outburst must be accentuated by an extra 30 percent. There is a touch of the stag do about it all, and you just know that they’ve left one of their mates tied naked to a lamppost somewhere.

It’s generally harmless stuff, but there is an unmistakable aura to it all.

Not quite running onto the pitch and windmilling at players or punching-a-horse levels, but certainly a situation where the fuse could easily be lit.

And talking about running onto the pitch and windmilling at players, next up we have another delightful evening with Leicester on Thursday.

A peculiar non-rivalry has been allowed to germinate, and we could do with putting it, and them, to bed nice and early. It will be a school night after all.

Up the regenerating Reds.