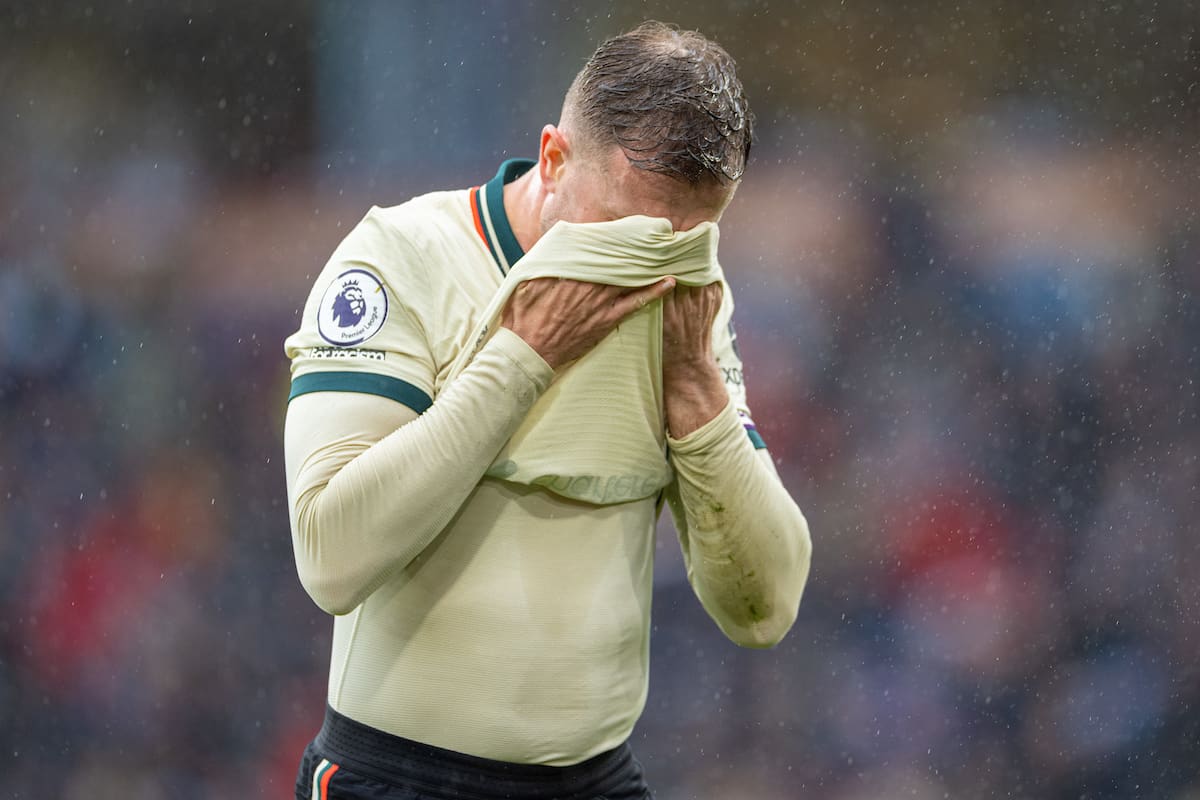 Jordan Henderson endured a difficult afternoon in a physical clash with Burnley on Sunday, with many Liverpool fans concerned about his lack of accuracy on the ball.

After recovering from a back problem that ruled him out of the 2-0 win over Leicester in midweek, Jurgen Klopp vowed that, if fit, Henderson would start at Burnley.

The midfielder made his comeback, then, in the wind and rain at Turf Moor, as part of a three-man unit alongside Fabinho and Naby Keita.

But Henderson struggled to impose himself on a physical clash, and most concerning was his inability to find a team-mate with his passes, the captain only completing 50 percent of his attempts.

Fabinho (83.1%) and Keita (90.1%) were considerably more accurate on the ball, as was Thiago (82.4%) who replaced Henderson in the 58th minute to allow Liverpool to regain control of the contest.

It was uncharacteristic from the captain, but many supporters have now begun to worry about the long-term impact of this drop in form.

Many pointed out the captain’s struggle vs. Burnley…

I don't think Henderson should be starting when everyone is fit. It has been a recurring theme this season and it was quite clear here he just physically and technically struggled.

This is the worst I've seen. Lost possession 24 times out of 48 touches. Completed 18/36 passes pic.twitter.com/OpQChZqWWR

When do we begin to worry?

Not sure what's happened Hendo but if u lose the ball 50% of the time it's clearly not good enough for our midfield! We played better when Thiago came on because he was composed on the ball!! Keita Hendo comparisons pic.twitter.com/6hNOGUm8P7

Jordan Henderson's defensive statistics per90 in the last 365 days do not make for a pretty sight pic.twitter.com/Z7B2AeivcV

The difference in effectiveness between Henderson and Keita in that first half was quite stunning. Capitan is having a tough time.

The level of control we exuded the minute Henderson went off for Thiago was hilarious. Night and day.

You can tell the difference in class when Thiago came on for Henderson.

The difference since Thiago has come on has been immense

This led to some questioning Henderson’s role…

Hendo should primarily be a Fabinho backup from now on, his legs are gone

it's so obvious hendo doesn't have the legs anymore man

Our RCM needs to be able to navigate through tight spaces and combine with Salah & Trent effectively. Henderson can’t do that consistently man ?

While it may seem a kneejerk reaction to call for Henderson to be phased out of Klopp’s side, these are understandable concerns when it comes to the efficiency of Liverpool’s No. 14.

The club rewarded him with a new four-year contract in the summer, amid claims of interest from Atletico Madrid and PSG, but at 31, he seems to be struggling for consistency.

Hopefully, Henderson can recapture the form that has made him so invaluable – and has, to be fair, been seen this season, including in the Merseyside derby – as when he is on his game, he is an outstanding midfielder.