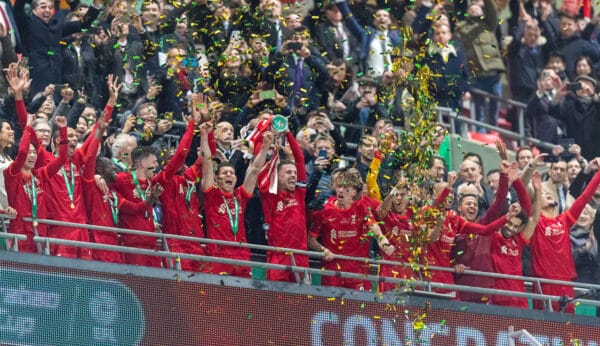 Liverpool win the League Cup: Player Ratings – What the media and statistics say

Caoimhin Kelleher and Luis Diaz shone as Liverpool sealed League Cup glory against Chelsea, on a memorable afternoon at Wembley.

The Reds won a breathless encounter on Sunday, taking home the glory after an 11-10 triumph on penalties.

Quite how a superb game finished 0-0 remains unfathomable, as huge opportunities came and went at both ends of the pitch.

In the end, Kelleher scored his penalty and Kepa Arrizabalaga skied his effort over the crossbar as Jurgen Klopp and his players celebrated another trophy.

Here we compare our player ratings with those from the Liverpool Echo, iNews, the Evening Standard, WhoScored, FotMob and the TIA readers.

It was Kelleher (8.1) who fittingly received the highest average, on an unforgettable day for the young goalkeeper.

The Irishman essentially scored the winning penalty for Liverpool, not to mention making a number of vital saves in the game.

TIA’s James Nalton gave Kelleher the Man of the Match award, describing his spot-kick as “clean and true”, not to mention him being “eager to leave his area to sweep up.”

The Echo‘s Ian Doyle hailed a “superb save early on” to thwart Christian Pulisic, as he produced a display Alisson would have been proud of.

In second place was the brilliant Diaz (7.8), who was a constant menace out wide and looks an unbelievable signing by the Reds.

The Colombian was Liverpool’s brightest attacker by far and he also made seven recoveries, as pointed out by FotMob.

Completing the top-three was Virgil van Dijk (7.6), with the 30-year-old a commanding presence at the heart of the defence, as always.

The Dutchman is “back to his imperious best”, according to Nalton, while Doyle felt he “helped calm Liverpool after a fraught opening.”

It wasn’t a day to focus on poor performers, but Naby Keita (6.3) got the lowest average, still doing a solid job in midfield.

Liverpool have a little bit of time to bask in the glory of this win, prior to hosting Norwich in the FA Cup fifth round on Wednesday night (8.15pm GMT).