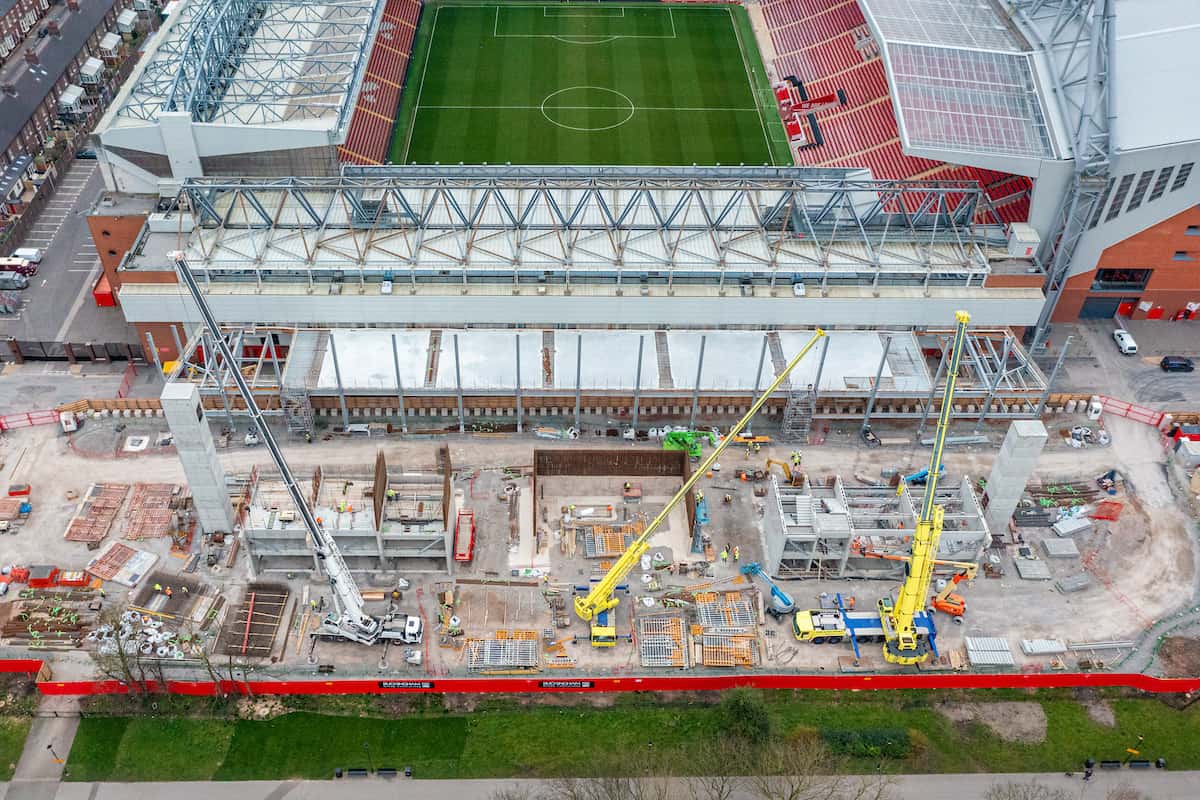 Liverpool’s Anfield Road Stand expansion has hit the six-month milestone, with work progressing on schedule and on budget.

All foundations and drainage has been completed on site, with the main core and roof shafts in place despite the recent weather with several storms hitting the UK.

Fans will soon start to see the steel frame of the stand itself and give a real feel for the size of the new stand – which will be almost the same height as the Main Stand.

Colin Roddy of The Buckingham group explained that the project is “on target” and that a real perspective of the sheer size of the new stand will be evident in the summer, giving fans a real ‘wow’ moment.

“The eventual roof will be approximately 40 metres, which is nine metres shorter of the Main Stand, to give you some perspective, and we’re halfway to that,” Roddy explained.

“When we finish the concrete cores in about four-six weeks, then the steel will come in and that’s built from the ground up.

“You’ll really get a feeling for the height of the structure at about the end of June start of July, we hope to see the first grandstand steel go up and we can appreciate what we’re building here.”

It’s exciting times ahead, but as for when the Anfield Road Stand’s existing roof will be removed, there are two possible windows — during the Qatar World Cup or the end of the 2022/23 season.

A strategy is in place to ensure there is no negative impact on the pitch for when 300 tonnes of cranes are utilised to take the existing trust down.

Work on the Anfield Road End expansion began last summer, with enabling works taking place over three months before construction was able to start in September.

Jurgen Klopp was present for the ground-breaking ceremony six months ago, and match-going fans have been able to take in the progress outside the stadium over the past half-year.

The new Anfield Road End is due to hold 15,967 supporters, with the expansion adding 7,000 seats at an estimated cost of £80 million – up from the initially projected £60 million. 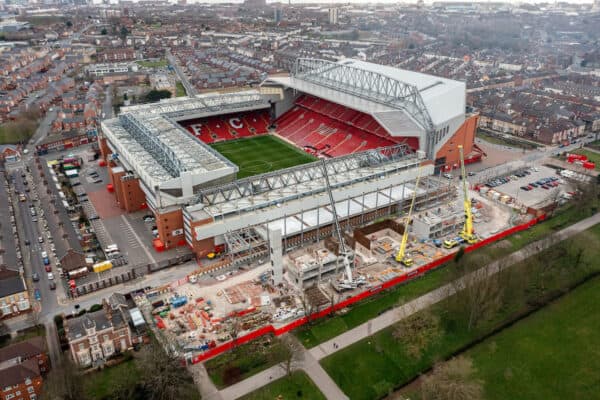 It will take Anfield’s capacity to 61,015, which will make it the fourth-largest stadium in the Premier League, behind only the London Stadium, the Tottenham Hotspur Stadium and Old Trafford.

Along with the expansion of the stand itself, works are in place to improve the interior and exterior concourses, with the aesthetic to match that of the Main Stand.