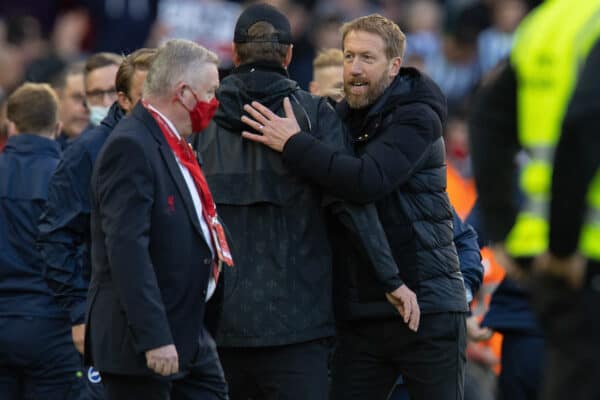 Brighton at near-perfect fitness with 1 absentee – Lallana to return vs. Liverpool

Brighton manager Graham Potter has an almost full-strength squad for the visit of Liverpool, with Adam Lallana set to return following a hamstring injury.

The Reds will look to restore their winning form on Saturday as they head to the Amex for a lunchtime kickoff, four days after their 1-0 loss to Inter Milan.

Despite that defeat, Liverpool still sealed progress to the Champions League quarter-finals, with Jurgen Klopp musing afterwards that “if there was any game we could have afforded to lose it was this one.”

Brighton welcome Klopp’s side to East Sussex on a run of four consecutive losses and with only one win in their last nine games, having only found the net seven times in that period.

Part of this is due to the ongoing absence of centre-back Adam Webster, and in his pre-match press conference on Thursday, Potter confirmed he would miss out again.

However, the Brighton manager explained that “everyone else is available,” with Lallana having recently returned to full training after a hamstring problem.

Enock Mwepu, who scored in the 2-2 draw at Anfield in October, is also back, though Potter admitted he would “need to keep an eye on his minutes and his involvement.”

In the absence of Webster, and with Dan Burn having left for Newcastle, Potter has experimented with his defensive line, including both four- and three-man units.

This has included full-backs Joel Veltman and Marc Cucurella filling in as centre-backs, while Shane Duffy has more recently reprised his partnership with Lewis Dunk.

That makes Brighton‘s starting lineup hard to predict, though the same back four that took to the field in the reverse fixture five months ago could be deployed again.

At Anfield, Cucurella and Veltman were on the flanks with Dunk and Duffy at centre-back, while that day, Potter effectively used two holding midfielders in Mwepu and Yves Bissouma.

It remains to be seen whether Lallana will be recalled to the side, though when fit, the former Liverpool midfielder invariably starts for Brighton.