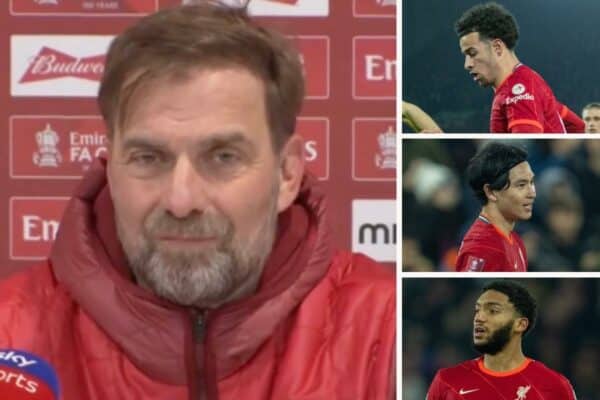 Jurgen Klopp gave a minor update on Curtis Jones‘ thigh injury as he reflected on reaching the FA Cup quarter-finals for the first time with a 2-1 win over Norwich.

Why Jones was subbed off

After having been left out of the squad entirely for the League Cup final, there could have been concerns over Jones’ position moving forward – and his response to being dropped.

But he was back in the side for the FA Cup and produced an excellent first-half showing, including hitting the bar with a brilliant long-range effort.

Unfortunately, Jones did not emerge after the break, with Harvey Elliott taking his place after suffering a thigh injury.

“Curtis Jones played a really good first half. We had to take him off because he felt the thigh slightly,” Klopp explained.

“I don’t think it’s a real injury, but there was no need to take a risk and that’s why we brought Harvey on.”

A reaction from Gomez?

Another player left out at Wembley was Joe Gomez, who made only his sixth start of the season on Wednesday night and largely impressed alongside Ibrahima Konate.

It has clearly been a frustrating campaign for Gomez, but Klopp held him up as an example of Liverpool’s all-round strength and outlined the challenge for those on the fringes.

“Joe Gomez, we don’t have to discuss his quality, obviously, and he showed it again tonight,” he said.

“The boys have to be ready. They don’t fight each other for a position, but they have to fight to be their best version.

“Then they have a good chance to be in the lineup for the weekend – but no guarantee.

Taki was not for sale!

Takumi Minamino‘s two goals took him to nine for the season, with only Sadio Mane (13), Diogo Jota (17) and Mohamed Salah (27) finding the back of the net more.

But having spent the second half of last term on loan at Southampton, there has been ongoing speculation over a move away – including enquiries from Monaco and Leeds towards the end of the January transfer window.

On the back of the Japanese’s display at Anfield, then, the manager was asked whether there had been any chance of his No. 18 moving on.

Klopp was straight to the point: “We didn’t think about it, I don’t think he thought about it, so no.”