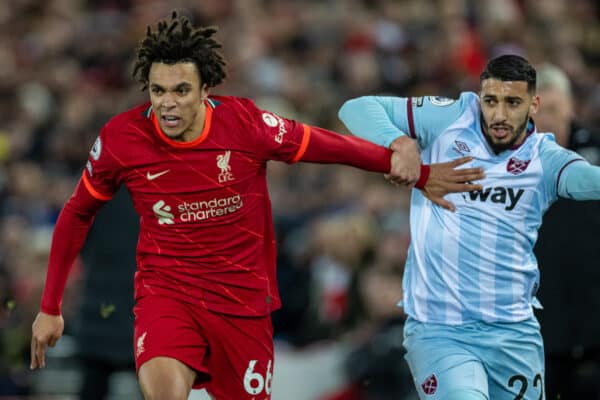 Every Liverpool game is going to be a test of attrition from here, and added to this, so will be a few games we have no physical vested interest in.

Saturday night social media was a wild place, where top Reds everywhere were arguing it out over the etiquette of how to deal with the following day’s Manchester derby, whether it was de rigueur or not to be shouting ‘them’ on for three points or not.

I’ll not even bother watching it myself. I’ll just take a cursory glance at the result later in the evening, before tuning into Napoli vs. AC Milan (absolutely huge in the Serie A title race), I suppose attempting to trump everyone in an “I can’t be arsed” sort of way.

Don’t get me wrong, any assistance in our chase for the Premier League title should be gratefully accepted, but I’m one for not following your rival too intently because should they win their game, then that is two hours that you’re never going to get back again.

Click on BBC Sport around 6.45ish, however, to see that points have been dropped by Manchester City and I will be locating any convenient post-match analysis and staying up to watch Match of the Day.

But click on BBC Sport around 6.45ish to see that Pep Guardiola’s side have rolled to the comfortable win that their superior collection of players should easily be able to pick off, then that’s OK too because Golazzo Live starts at 7pm and there is a pizza in the freezer that needs eating.

Arm’s length is exactly where intimate rivals can stay unless they’ve suffered a bit of a misfortune. Hence, I’ve actually been watching a hell of a lot of Everton this season. Just for the comedy content, you understand.

At Anfield, the Saturday early-evening offering was predictably difficult to digest in parts. David Moyes is the alpha pragmatist of the Premier League now, a role that has previously rested in the hands of the likes of Roy Hodgson, Sam Allardyce, Alan Pardew, and Tony Pulis.

It is a position akin to the longest-serving MP being declared ‘The Father of the House’. A dubious, yet semi-powerful vacancy, which has been earned simply because the individual played his football in at least three or four hostile and unforgiving pre-Premier League environments, and has a few embarrassing Panini stickers of himself knocking a draw where you might find a keyring from Pontins.

Jurgen Klopp had some nice words to say about Moyes’ team, according to the man himself, but I elected not to find out what they were. I’m just quite happy we’ve seen the back of him and his team for at least five months, but if he’d be good enough to take points off Manchester City on the penultimate weekend, then I might not begrudge his team a run to the quarter-finals of the Europa League (no further, due to their supporters proving to be a bad set of biffs yet again).

Trent Alexander-Arnold was yet again a superhero in this one, setting up the only goal, and hooking West Ham’s best chance away from the Kop goalmouth. It feels like Trent should have a phonebooth at each corner flag, just in case he’s required to pull his underpants over the top of his shorts.

All very apt as the new Batman movie is released, parts of which were filmed outside St George’s Hall, where watching youngsters reputedly willed the central character on during filming with morale-boosting, but way too audible shouts of “Go-ed Batlad”. It’s also impressive that they Scoused up the title by naming it “The Batman”, something that gives a heavy nod to our favoured reference of “The Asda”.

It was a game that could have gone badly wrong, as West Ham carved themselves another best chance when Manuel Lanzini opted to ‘Kepa’ the ball into the Anfield Road end when way too handily placed, yet in mitigation Liverpool could have been 3-0 up themselves by half time, as Mohamed Salah was wasteful with a one-on-one, and there was a mad goal-line clearance/penalty box scramble where Trent was given the ball back in order to have another go, so startled were the visiting defence.

An esoteric oddity of a game at times, VAR considered denying us our goal, while Jon Moss struggled to keep up with basics from time to time, at one point awarding West Ham a free kick for one player basically being caught in possession by too many Liverpool players at once.

The type of game that provokes a sizeable sigh of relief at full time, and three hugely valuable points claimed. Back to Anfield we go on Tuesday night for the visit of Internazionale in the Champions League, where hopefully we put the game to bed early rather than permit it to become interesting.

In other observations, it was also great to see those two massive banners rolling across the Kop and Lower Centenary once again, number of league titles fully updated.

Still in with a decent chance that more needlework updates will be required this summer.