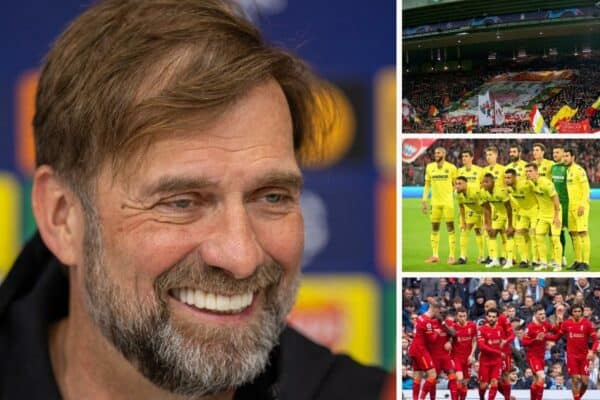 Jurgen Klopp is expecting a tough evening for Liverpool against Villarreal but knows his players and Anfield can make the Spanish side suffer.

Here are four key points from the manager ahead of the semi-final first leg:

Anfield knows how to turn it on and Klopp is expecting that to be the case for one of the biggest nights at home this season.

He expects it to be a tough match but there’s no need for nerves as Villarreal can be made to suffer too.

“We have to make sure we are really are completely on top of our game, everybody in the stadium.

“This advantage at home we have to use.”

Time to make life as difficult as possible

Villarreal arrives at Anfield having already knocked out both Juventus and Bayern Munich and Klopp knows not to take Unai Emery’s side lightly, especially when they have a plan for everything.

“I had a lot of respect for Unai Emery and Villarreal before, but now I watch them properly and wow, impressive,” Klopp said.

“Unai looks like a detailed obsessed manager who prepares for all situations and that’s what his team is executing.

“Really impressive, and Unai is a world-class coach and is doing a great job there.

“Our job has to be to make life as difficult as possible for them, that’s what we try to do over these two legs.”

Emery is no stranger to Klopp on the big stage with two meeting in the Europa League final in 2016, a game that was in some ways a catalyst for the Liverpool we see today.

Every game is a final

It’s a phrase that has been readily used throughout 2022 for Liverpool but just when did Klopp himself feel that was the case?

“When I came back from my Covid break, our next PL game was Brentford, we were 14 points behind with two games in hand,” Klopp explained. “We decided let’s give it a try.

“The main thing we have to do is qualify for Champions League for the next season, it slipped through my fingers and never happened to me before, and I had to be reminded of it the next day.

“Each game is a final and each should be a final, it will not change until someone says it’s not worth fighting anymore.”

It’s another final on Wednesday and taking an advantage into the second leg in Spain will be huge. Into these.

This is the third Champions League semi-final for Liverpool under Klopp and the enormity of the achievement is not lost, and it’s that gratitude that can allow for him and his players to enjoy the moment.

“So many coaches and so many players work their socks off their whole lives and have no chance to be close to this, a Champions League semi-final.

“We have to cherish it and we need to enjoy it as well.”

Imagine being us. These are special days.