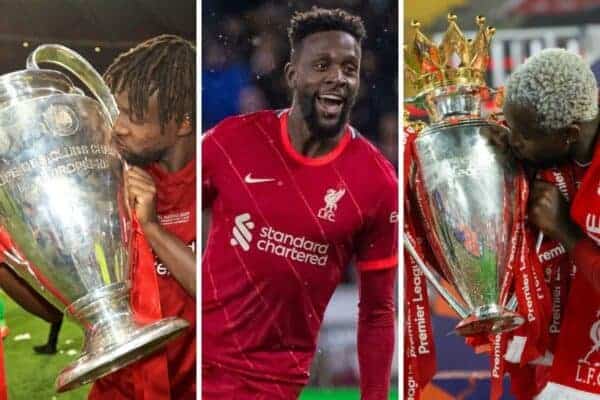 Divock Origi‘s time at Liverpool has come to an end after eight years as a Red, leaving plenty to reflect on throughout a “special journey.”

A favourite among fans and players, Origi has delivered moments that will never be forgotten at Liverpool having played a key role in the success under Jurgen Klopp.

He may have largely been on the periphery but he was not without his moments in the spotlight; Barcelona, Tottenham, Everton (x6), Newcastle, Wolves and many more.

And eight years after signing for the club, he is to embark on a new chapter away from Anfield, with AC Milan expected to be the club securing his signature.

After a guard of honour at Anfield and a serenade from his teammates following the parade, Origi took to Instagram for another farewell after enjoying a “special journey.”

With a video of his guard of honour at Anfield that included a Klopp hug and a banner on the Kop that read, ‘Football without Origi is nothing’ it made for another poignant farewell.

His trophy haul is an impressive one having completed the set at the club with the European Cup, Premier League, Club World Cup, Super Cup, League Cup and FA Cup.

And while his posts are not always accompanied by much in the way of words, his teammates, past and present, flooded his comments.

From Jordan Henderson, Virgil van Dijk, Kostas Tsimikas and Andy Robertson to Dejan Lovren, Marko Grujic and Pedro Chirivella, they all had an emoji to share or kind words to say.

During Sunday’s parade, Origi spoke of his departure and how confident he is of the success that is still to come from Klopp’s team.

“I will miss these boys a lot. I have been here eight years, but I feel my purpose is done,” he said.

“The club is in safe hands. There is so much still to come from this team.”