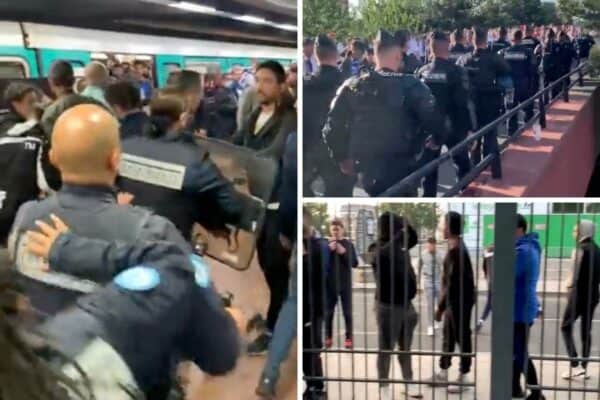 The fallout of a shambolic Champions League final in Paris has spilled over from the weekend, with Real Madrid fans revealing similar treatment to Liverpool’s.

A UEFA meeting will take place on Monday to investigate the horrendous situation outside the Stade de France on Saturday night – and their own efforts to cover it up.

Thousands of supporters were left waiting for hours in the Paris heat as authorities denied access to the stadium, forcing kickoff to be delayed by 36 minutes.

Many fans never made it into the stadium, with police deploying tear gas on crowds for no logical reason, while UEFA first claimed the issue stemmed from “late arrivals” and then ticketless Liverpool fans.

There have been many accounts of ticketless locals scaling fences to gain access to the Stade de France, and after the game, gangs targeted, mugged and assaulted Liverpool and Real Madrid fans on their way to train stations and hotels.

A report from Spanish outlet 20minutos has provided accounts from Real supporters telling of “armies of robbers” in their “hundreds and hundreds” attacking those leaving the stadium.

“There were no security rings or anything like that, anyone could sneak in,” one explained.

“And those who were seen jumping fences were people from the neighbourhood who were already looking at everyone, looking for watches, mobiles.”

Another added: “People cannot imagine what that was like. They were armies of robbers hunting us. There were fights, robberies. A scary movie.”

In a thread on Twitter, Sergio Santos of Spanish outlet Relevo gave his account of the evening, again pointing to issues with security and, moreover, trouble with local gangs.

Santos recalled “local youth groups who beat up and robbed Liverpool and Madrid supporters,” while adding that “fake tickets were another problem.”

“For days in Saint-Denis they offered tickets at skyrocketing prices (€2,000 the cheapest). That was for everyone to see and not much was done. Many were fake,” he wrote.

“A funnel formed: the victims of false tickets and those who wanted to rob and hit.

“Blaming all this on the English who came without a ticket is unfair.

“The fault lies with the organisation. English teams have reached European finals for decades without having to delay the start of a game.

“That atmosphere rarefied the initial minutes, where the fans encouraged less than usual until warming up.”

Santos continued: “On the pitch, after the game, the players themselves asked their family and friends about the incidents, because some were affected.

“Unfortunately, things did not end there.

“At the exit of the stadium the chaos was repeated and the aggressions and robberies returned. Some fans had to be evacuated from the subway after being attacked and robbed.

“It is a day of celebration, but all this should serve for reflection.

“UEFA must take responsibility and never again allow entering the stadium in a Champions League final to become a survival challenge for someone.”