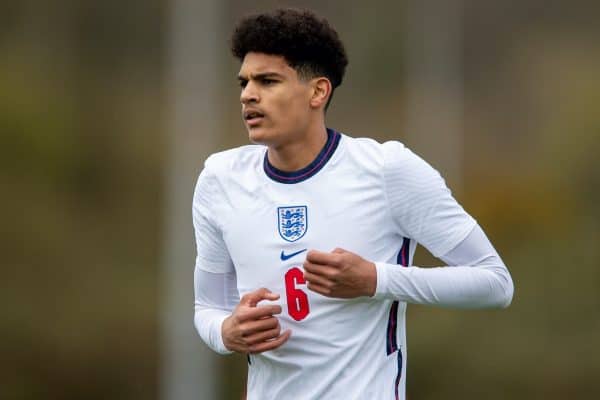 Liverpool duo Jarell Quansah and Luke Chambers were both involved as England kept a second clean sheet and booked their place in the U19 Euro semi-finals.

Though there is no major international tournament this summer, with the World Cup instead held over November and December, the Euros are ongoing at under-19 level.

England have been one of the strongest sides at the tournament in Slovakia, and on Wednesday night they earned a second consecutive victory and sealed progress to the semi-finals with a game to spare.

In doing so, England have also booked their place at the Under-20 World Cup in 2023.

Quansah, the 19-year-old Liverpool centre-back, made his second start as the young Lions took on Serbia, and played a key role in keeping another clean sheet.

An early lead came through Tottenham striker Dane Scarlett, who was fed the ball by Aston Villa midfielder Carney Chukwuemeka for a comfortable finish into the bottom corner after just four minutes.

Scarlett doubled the tally as he threw his body at a fine Brooke Norton-Cuffy cross before the break, and a brilliant effort from Chukwuemeka, after latching onto a loose ball, made it 3-0 after half-time.

Daniel Jebbison wrapped it up in stoppage time, as England made it two wins from two, with six goals scored and none conceded, joining France and Italy in the semi-finals.

There was another 90 minutes for Quansah, who was comfortable throughout at centre-back, while Chambers came off the bench for the final 15 minutes at left-back.

Harvey Davies was omitted from the matchday squad for the second game in a row, as he finds himself behind Matthew Cox and Teddy Sharman-Lowe in the goalkeeper pecking order.

England still have one more group game to play, and opponents Israel will see it as a must-win as they look to box off the final spot in the semi-finals.

Manager Ian Foster is likely to rotate his side somewhat for that clash on Saturday evening, with Chambers, who is one of the youngest players in the squad at 17, among those who could come in.