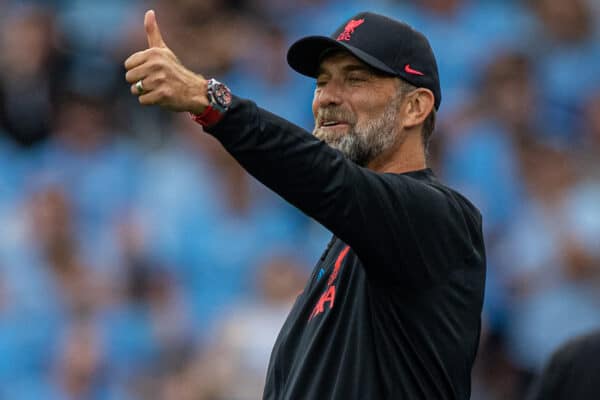 Jurgen Klopp was left hugely encouraged by Liverpool’s performance in the 3-1 win over Man City on Saturday, and particularly the impact of his substitutes.

The Reds lined up as expected at the King Power, with the biggest calls at centre-back, as Joel Matip started over Ibrahima Konate, and up front, with Roberto Firmino preferred to Darwin Nunez.

Klopp was rewarded as Liverpool came out of the blocks fast, and it took just 21 minutes for Trent Alexander-Arnold to break the deadlock via Nathan Ake’s deflection.

But the second half was a stage for his substitutes, and particular striker Nunez, who came on and won the decisive penalty before netting the third of the night himself.

With six changes permitted in the Community Shield, Klopp used all of them, with Nunez followed by James Milner, Harvey Elliott, Naby Keita, Fabio Carvalho and Curtis Jones.

“I was happy with the starting lineup, I was very, very happy with our start to the game,” Klopp told ITV after the win.

“Then I have to say all subs made a real difference – all.

“They came on and [even] if it was only for three or four minutes with Fabio and Curtis, they were really in the game.

“I loved that, it was the most important thing I learned today: the boys are ready!”

Liverpool were without Alisson, Diogo Jota, Kostas Tsimikas, Alex Oxlade-Chamberlain, Calvin Ramsay, Kaide Gordon and Caoimhin Kelleher on Saturday, with the squad due to only increase in strength.

But those available to Klopp at the King Power clearly made their mark, as the manager elaborated in his post-match press conference.

“I’m really excited about what’s coming there,” he told reporters.

“I loved Harvey’s impact. Fabio came a bit late only because of set-pieces – we were not sure how to deal then with it.

“Milly is there, I’m not sure which level he can reach this year, to be honest – it looks very promising with Milly!

“The boys who were sitting out and were not involved today are in good shape as well.

“So that was the impression I had after pre-season, but then you need a game, a real game, to show how far you are. Tonight it was absolutely OK.”