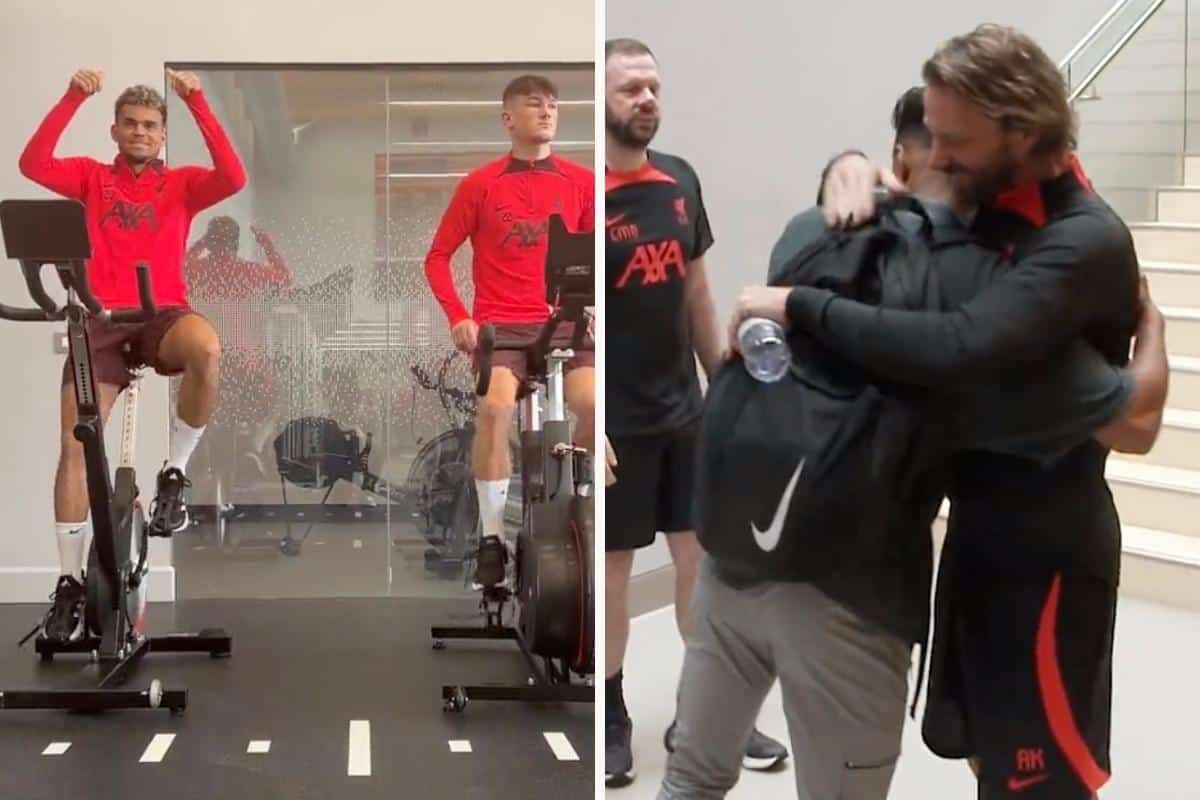 The first day of pre-season is upon us and Liverpool signings Fabio Carvalho and Calvin Ramsay are meeting their new team-mates for the first time.

A 19-man senior group reported back to the AXA Training Centre around lunchtime on Monday, as the pre-season schedule kicks off.

While many of Jurgen Klopp‘s key players will not return until later in the week, a number of familiar faces are being put through their paces in the gym in Kirkby.

Luis Diaz was one of the first to arrive following a long break in Colombia over the summer, and the 25-year-old was in high spirits as he joined Ramsay on the exercise bikes:

“He cannot stop smiling during training,” Klopp said in April, with his No. 23 keeping that infectious positivity heading into his first full season.

It may be a nerve-wracking day for Ramsay, who completed his £6.5 million switch from Aberdeen earlier in the summer, as he makes a big step up to the first-team squad at Liverpool.

Full of confidence, though, is attacking midfielder Carvalho, who was officially unveiled on Sunday after a long-awaited transfer from Fulham.

The £7.7 million signing was spotted arriving at the AXA Training Centre via taxi, and was greeted upon his entry by fitness staff Andreas Kornmayer and Chris Morgan:

Carvalho just missed assistant manager Pepijn Lijnders, with the Dutchman busy throughout pre-season as he devises and leads training sessions with Klopp’s trust.

Lijnders was one of the first coaches through the door on Monday, and was full of energy as he welcomed the LFCTV cameras in the foyer:

Though the club confirmed a 19-man squad for day one of pre-season, it is likely that the group will be fleshed out by a host of youngsters from the academy.

The likes of Tyler Morton and Kaide Gordon were not announced as being involved but, having already begun training within the youth setup a week previous, they will almost certainly join the senior squad from now.