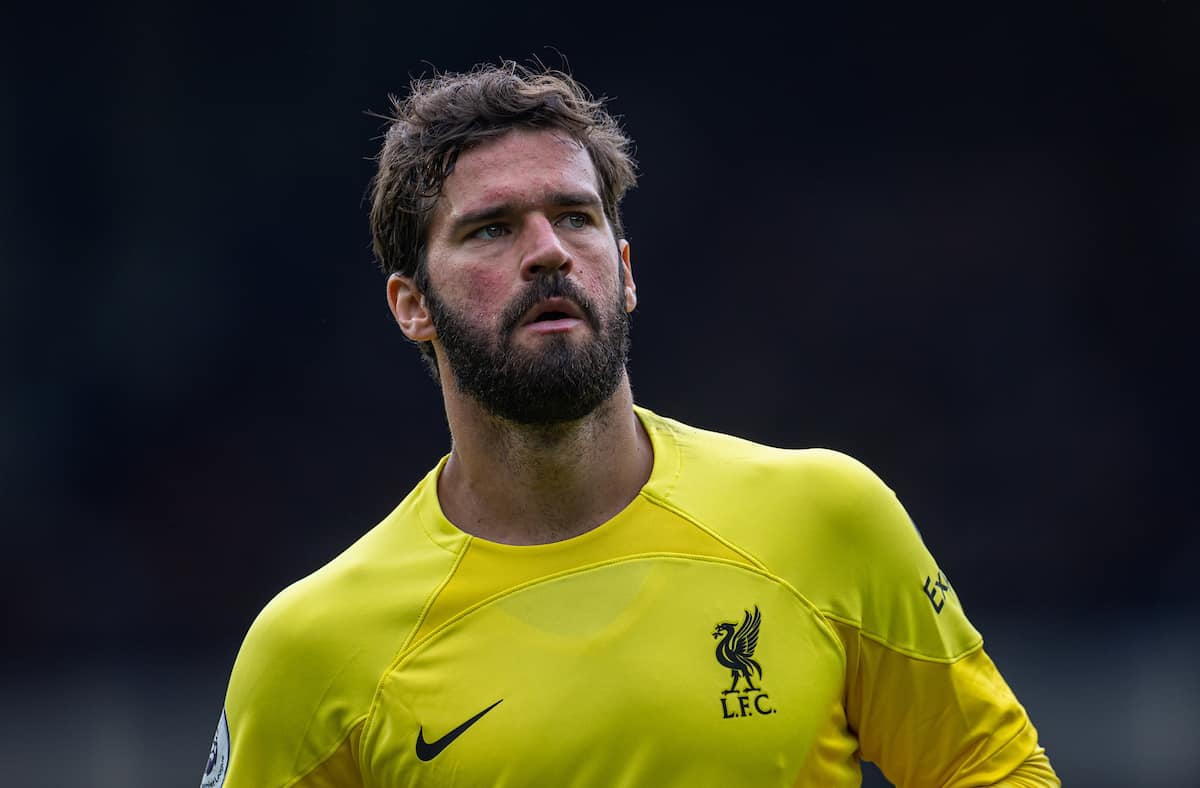 The Merseyside derby was a big disappointment overall for Liverpool, who had the possession and the chances but ultimately couldn’t take the points on another frustrating Premier League afternoon.

A decent couple of routine saves and some nice footwork in the first half. Couldn’t do anything about the Davies effort which struck the post and wasn’t happy with his defenders a few times on account of the space afforded Everton‘s attackers.

His big moment came just after the hour mark with an Everton counter, standing up to save from Maupay at point-blank range – a hgue save. Possibly an even better one later on to tip a deflected strike over the bar and even tipped the Maupay shot off-target before an offside Coady tapped it in.

Just not at the races yet this season. His defending was 50-50 at best, a few important moments – like covering on Maupay right before the break – but also beaten in one-on-ones too easily.

Crossing and passing are normally his top traits of course but right now those fizzed balls are missing the mark and the lofted ones aren’t exactly unerring either.

Subbed so early when looking for the win in the last game, and before the hour mark in a goalless derby, speaks volumes about where our most creative outlet is at the moment.

A few sloppy moments at the back, such as getting it stuck between his feet from a cross which ultimately led to Davies’ attempt off the woodwork, but generally speaking Gomez had a strong first half. A couple of big block challenges on Gordon and Maupay were important, as was one covering sprint against Gordon on a dangerous counter.

Our best outfield player probably, which doesn’t hint at a match we should have won by three or four, does it?

Didn’t really do too much wrong in the first half, during which he saw a lot of the ball as we played it back and across our backline so often. A few overhit pinged balls but also some decent blocks and an important aerial or two won.

Made a big block on Patterson from close range and stopped Onana a few times when he tried to rampage through. Good without being at this best, still.

Started off very sloppy, losing his man and being run past by Gray way too easily, but then worked his way into the game after 20 minutes or so and had a decent battle against both him and Gordon.

Some much stronger overlaps and runs forward and, while his crosses still aren’t up to scratch, his cut-backs and short link passes were largely excellent. Cannot shoot to save his life, mind.

Might have been mildly harsh to sub him to be honest – a decent outlet before he departed.

Up and down in terms of challenges and ball-winning, which is nothing really new for Fab – he’s totally happy to break up play by fair means or foul. That was needed a few times today.

Definitely an important presence when it was so basketball-like in the second half and his distribution was largely decent. One good strike saved by Pickford could easily have been a winner.

Still Liverpool’s most impressive performer in the middle of the park. He was very heavily involved in our early first-half dominance, made that right-sided triangle work nicely and tried a few passes between the tight lines to open the defence.

Second half he was certainly quieter, though that was in large part because a midfield shift left him as part of a double pivot for the first time: more defensive responsibility, more chasing and closing down, less being an outlet. It was probably a struggle for him not to get lost at times but he definitely put the work in.

A surprise first start for him given the encounter and it was a decision that didn’t pay off.

Not involved in the play for long spells, while he was totally unable to make runs into the area too – a bit different starting as an 8 to coming on as an extra attacker looking for a late goal!

Injured before half time with a late tackle and went off at the break.

So marginalised by either doubled-up defences or the Reds’ own tactics so far this season, often crowded out and unable to get any opportunities to run in behind the defence.

He’s much more build-up focused than finishing so far, which is not exactly utilising his best traits.

We have to mention his race back into his own six-yard box for the Maupay chance on the break, which was absolutely vital, but it’s the other direction we want to see Salah getting into key areas for.

Had one chance all game, right at the end, and hit the post – almost as though we should be trying to get him into good areas more frequently. 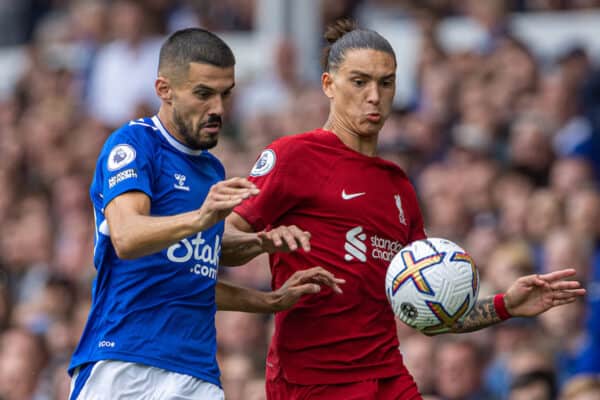 Back from suspension and back in the team. So close to a Torres-style thumper, chest and volley, but tipped onto the bar.

He had not really been involved a huge amount up until a couple of chances fell his way, but got more into it thereafter.

Firmino playing closer to him in the second half helped a bit and his work rate was on show more than once, but the only other two real shooting chances he had saw Darwin scuff efforts or shoot off-balance. More required.

Hit the post after Darwin’s woodwork, having been another of our attackers too narrow to really find any space or time on the turn beforehand.

That was about the only occasion he was able to do his patented cut-in-and-whack-it move and it almost ended in the net.

In the second half he got a bit more aggressive on and off the ball, which was good to see, but his passing was really sloppy today and he wasted a good few chances to play in an overlapper. One of his most poor performances so far, in truth. 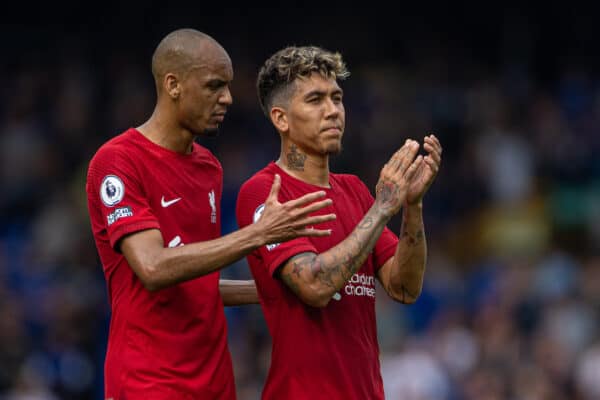 Roberto Firmino (on for Carvalho, 45′) – 8 – On at the break as a second forward and immediately made the Reds a bit better in build-up. Three times denied by Pickford.

James Milner (on for Alexander-Arnold, 59′) – 5 – Went right-back first, then into midfield soon after when it was clear he was being exposed. 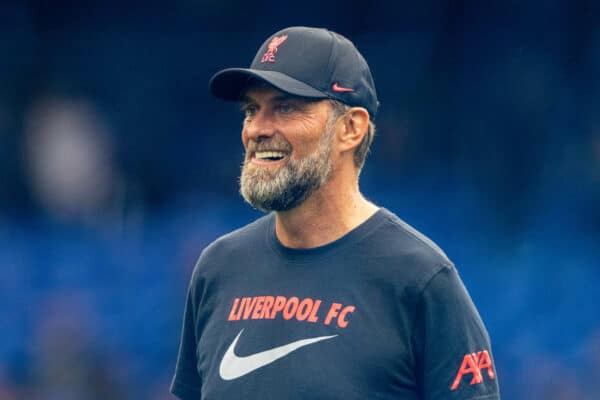 Hard to say that either of them worked in truth, with the Reds once again looking like a very bog-standard team, with structure in their play but no energy, no speed, no moments of attacking genius in combination play.

Firmino was one of the only ones who really upped our game and he was only on by need due to injury, at that time at least.

The change to a two-man midfield was probably justified, so wasn’t wrong to do, but we lacked control for large parts of the game still and it’s not really enough to say we don’t have options to change it in the squad due to injuries – not everything can be down to not having Thiago or Keita or a fully fit Jota, or whatever.

It’s too slow, it’s not getting the best out of a few crucial players at the moment and it’s definitely going on too long.

A tough run is coming up and Liverpool don’t look anywhere near firing on all cylinders.