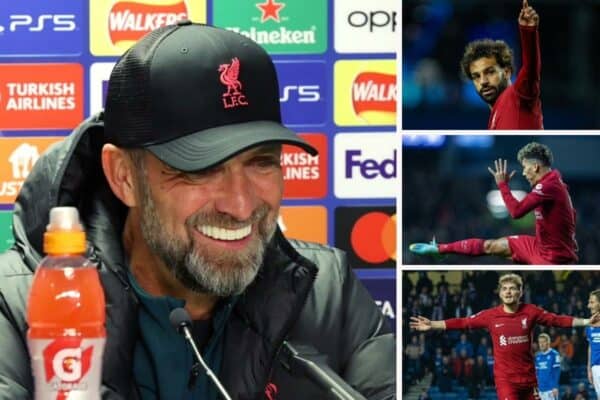 Jurgen Klopp knows not to get carried away with Liverpool’s 7-1 win at Rangers but the change in mood and the boost in confidence for his players was not lost on the manager.

Here are four key points from Klopp after the thumping victory:

A freak result, but a needed one

It’s fair to say this season has been a turbulent one and reasons to celebrate have not been as forthcoming as they’ve been previously.

The win at Rangers was emphatic in the end, but Klopp knows more than anyone not to read too much into a “freak result,” clearly content to just revel in a winning feeling.

“Very important, how the boys adapted to it, to the positions and how they reacted – I thought everybody who started tonight played really well,” Klopp said.

“Can’t think of one player who didn’t have a good game.

“When you can change like we changed tonight, if we can do that, then the boys come on and are ready to contribute then things like this can happen.

“A freak result, we all know that, and we don’t make more of it than we should but, obviously, it’s the best we could’ve asked for.

You’re not the only one, Jurgen.

A beer at long last!

Liverpool had not won on the road in 2022/23 until this fixture, meaning it has been a long time between drinks for Klopp and his staff.

While the Reds are not bigging up the win more than it needs to be, the change in mood was needed and is obvious.

“It changed the mood definitely, it’s completely different,” he said.

“We (the staff) usually drink a beer after away games, it’s that long ago that I drank a beer that I will probably be drunk after the one.

“Yes, it changed the mood completely, it’s good. But we all know who we are welcoming on Sunday and this will be a different game, we know that.

“But it’s better to go into the game with this feeling that we got tonight.”

“The relief was big”

There were four different goalscorers on the night and the confidence boost that provides was not lost on the manager, for the individuals and as a collective.

“I couldn’t see Mo celebrating because he was always running in the corner [to our supporters], but I could see it with Darwin, it meant the world to him,” he said.

“The relief was big and obviously all the efforts are paying off.

“Yes, of course, we all know when Mo, when it is running for him, he is exceptional, absolutely exceptional.”

Exceptional is certainly one word for the Egyptian!

Why the changes and the subs?

There were six changes to the starting lineup and Klopp used his full complement of five substitutions during the match.

The fitness of Diogo Jota forced the manager to rethink his XI, while the minutes played by some was a key focus for his substitutions, as you’d expect.

“The changes tonight were a lot of good because we could do it, but Jota didn’t start because I got a call this morning that [said] he feels a little bit his muscle,” Klopp explained.

“He could play but he should not play for too long, so it was my decision to decide do I start him for 30 minutes or do we bring him [on] for 20?

“Hendo played a lot, Darwin now played a lot after not playing that much and you have all of these kind of things in your mind when you do the changes.

“Actually, the first 11 was really good but the changes made gave us the next step with us and that was very, very pleasing.”

How many changes should we expect for City on Sunday, then?