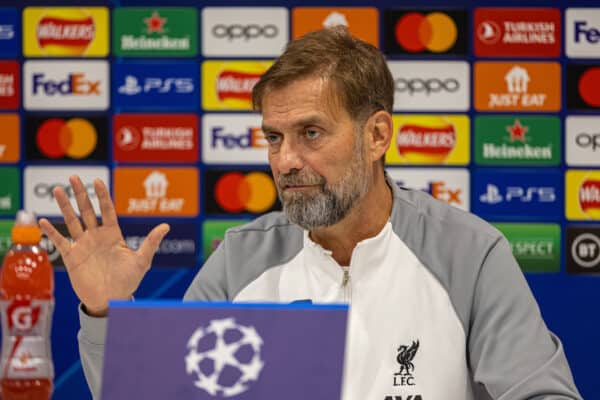 Jurgen Klopp is open to criticism during a “really rough period,” but insists it is “not fair” to judge whether his Liverpool squad is in decline just yet.

Amid a disastrous start to the Premier League campaign, with four wins out of a possible 12, there are understandable questions over the state of Klopp’s squad.

Only five of those are 25 or under, with the average age of the squad higher than all but two clubs in this season’s Premier League.

But with long-term injuries to the likes of Luis Diaz, Diogo Jota, Ibrahima Konate, Naby Keita and Joel Matip, Klopp feels it is “not 100 percent fair” to judge if it is nearing the end of an era.

“We are obviously all out there and we do the job in public, and I think the judgement for this will be later on in the season,” he told reporters on Monday.

“Let me say, maybe at the end of the season, where we say ‘OK, that’s it’ for this group of players, this manager if you want, whatever question will be asked then.

“But in the moment, it’s not 100 percent fair to judge the team, which means the squad obviously, because we never had them available.

“We miss, especially now up front, top quality, which is not helpful.

“That doesn’t mean that the others are not top quality, they have that, but with the amount of games we have, usually you would make changes. We can’t do that.

“Very similar situation in midfield, for a long time already plenty of players were out, or were out, came back and these kinds of things.

“We had it pretty much everywhere.

“Even if it’s unfair, it’s fine. That’s normal. That’s our life. You are absolutely right to ask these kinds of questions, but we probably have to answer that later on.”

It cannot be avoided that Liverpool are in a dire situation at present, with back-to-back defeats to Nottingham Forest and Leeds undermining a big 1-0 victory over Man City.

Tuesday will see Napoli visit Anfield in the Champions League, and though both sides are already through to the last 16, the Reds will still be smarting from their 4-1 thrashing in Naples.

But ahead of that tie, Klopp has vowed to give everything to drag his side through a “really rough period.”

“It was never a quick fix, and now it’s proven that it’s not a quick fix. But we will not stop fighting,” he insisted.

“I didn’t read anything, but probably everything about me will be judged now as well.

“It’s absolutely fine, but people will look at me and say ‘he looks tired’ or whatever, that’s normal as well. I’m not.

“My job is not only being here in the moment when the sun is shining and somebody gives us a trophy.

“My job is as well to be there when we have to go through a really rough period, and I will do that, with all I have or, if possible, even more than 100 percent.”

Klopp added: “We are all there to be judged, it’s completely fine.

“Manager, players, that’s how life is in professional football. But in this moment, I don’t think about that at all, because we can’t change it anyway.

“We have to go through this.”