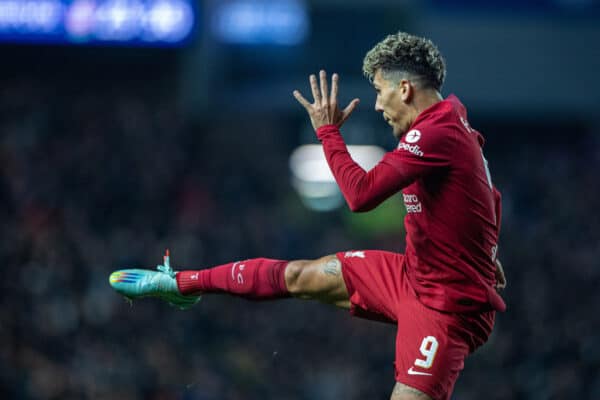 Roberto Firmino is enjoying his best-ever start to a season in front of goal, but Jurgen Klopp wants the Liverpool striker to “spread the goals” more.

In his first 12 games this season, Firmino has already scored eight goals and laid on four assists, which is comfortably his best start to a campaign.

He is one off equalling his goal tally for 2020/21 and three off his output for last term, while it took him 19 games to hit eight goals in his most prolific campaign, when he ended 2017/18 with 27 goals and 16 assists from 54 outings.

While the Brazilian is firing, though, Liverpool have struggled for consistency so far.

And though full of praise for Firmino ahead of the clash with Man City on Sunday, Klopp was keen to point out that four of his goals and all four assists have come in just two games against Bournemouth and Rangers.

During his pre-match press conference, the manager challenged his striker to “spread the goals.”

“It’s extremely helpful when the boys know, even when for us it’s not the best moment we’ve ever had, where the goal is.

“We just need to spread the goals a bit more to different games, let me say it like this. We should not focus on one, then nine, then seven, then nil. We know that.

“Positive things always help all of us, and footballers as well.”

It would be remiss not to credit Firmino for his flying start, as few other Liverpool players have contributed as positively as the No. 9.

But as he continued, Klopp hammered home the need for consistency as the Reds look to improve their form.

“Look, in our situation, nobody played the season he should have played yet,” he went on.

“Yes, Bobby numbers-wise it is like this, but now he scored two [against Rangers] and how many against Bournemouth?

“Bobby is an exceptional player. I think nobody else said it more often than I said it. But it’s not like Bobby was flying in all the games.

“Now we take the numbers and say ‘that’s his best start’. That might statistically be the case, but we as a team didn’t have the best start in our lives.

“But this moment helps, of course, now scoring two. Loved the first goal, loved the second goal, which was an incredible cross by Joey.

“But that Bobby is there makes a difference. If you score a goal before, then you arrive in that moment in the right moment.

“Then you have the drive to be in the back of the defender to get the foot on the ball, then you hit the ball and the ball goes through the legs of the goalie.

“In other games the ball goes through the leg of the goalie and goes out and you think ‘how can that happen?’.

“So you have to be in these situations as often as somehow possible.