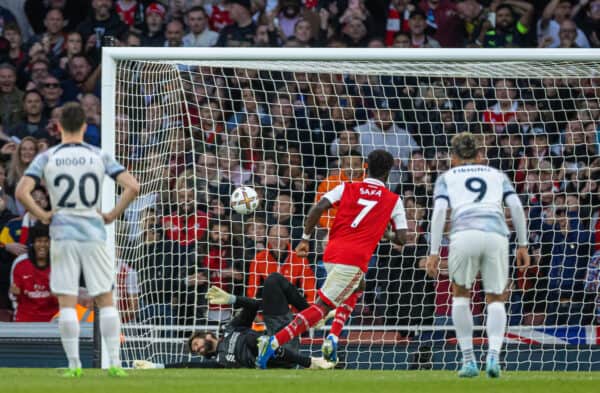 Liverpool kept faith with the 4-4-2 system on show against Rangers but defensive deficiencies were the talking point again in a 3-2 defeat at Arsenal.

It wasn’t just a one-game sticking plaster, then: the midfield double-pivot was back for a Premier League test, after Jurgen Klopp switched matters up against Rangers.

Thiago and Jordan Henderson were the chosen two again, Fabinho left on the bench, and it took less than a minute for the skipper to be caught out – dragged across instead of tracking the run of the only danger man, Odegaard, who was left with an ocean of Emirates to pick his pass from. He found Martinelli, goal.

In possession, the double pivot has lots of positives.

We have a slightly flatter recycling line when trying to build pressure, we have an extra offensive-minded player trying to get beyond the defence, we have an additional goal threat – all the basic things about having an extra forward over the midfielder.

What Liverpool do not yet have is the alignment and progression of passes into the final third: sometimes it’s too static and very reliant on Jota (from the start) to drop in and take the ball on the turn, or an overlapping full-back to be the out-ball.

Out of possession, it’s still a bit of a mess in truth. We’re being split open by counters and bypassed by direct balls into the channel and not having the recovery runners in place to deal with it. Still work to do.

Darwin gets his reward

Despite making a lot of runs behind the defence against Rangers, and certainly getting plenty of shots away, Nunez wasn’t able to find his way onto the scoresheet in Europe.

Praise was there from the boss and his team-mates, but patience and positives only go so far for some – a goal has a funny way of getting potential critics back onside, with context often ignored.

This time around he kept plugging away with the runs, kept working hard off the ball and took on shots whenever possible – AND found the back of the net. His finish was routine, close-range and first time, but it was the anticipation and drive to keep ahead of his marker which was more impressive and important.

It wasn’t all roses. We’re not used to having an on-the-shoulder No9 in red, so seeing someone standing four yards offside multiple times a game is rather frustrating, and probably something we’ll have to get used to.

Gomez on at right-back

We’ll see what the boss says post-game, but Trent Alexander-Arnold going off at half-time is unusual enough to make headlines. With the full-back picking up a brief injury midway through that first 45′, it would be an easy get-out to blame it on that issue flaring up.

However, it was another tough outing for our No.66, with both Arsenal‘s two goals at the start and end of the first half coming via his channel.

The first wasn’t his fault: we’ve covered already the lack of midfield tracking and it was a great pass between defenders, with Trent very narrow already. If he was even closer to Matip, it’s an easy pass outside him.

For goal number two it’s a different matter: Trent and Henderson had to, between them, block off Martinelli. It’s basic stuff: One goes beyond to track the sprint if he tries to hit the byline; the other holds to block off a cutback onto the right foot. They both went instead, and left a massive gap. Goal.

So here’s the thing: is there already a ‘rule’ in place for who does what when it’s recovery runs? If so, whichever ignored it got it horribly wrong. If not then the communication or decision-making from the pair of them was an abomination and not for the first time.

On came Gomez at the break and for the first five minutes he struggled badly, with numerous passes in behind him and one floated ball over his head.

He improved in one v ones, but naturally our build-up play suffered.

What even is control

When was the last time we saw seven or eight Liverpool shirts inside their own box, scrabbling about trying to get a foot in, desperately hoof clear and avoid a third or fourth rebound being smashed in?

Not once, not the odd occasion, not even to defend a lead in the final five minutes…but constantly? For most of a half?

The lack of ability the Reds have at present to dictate where games are played is astonishing. These are players who were nearly unbeatable in Europe for so long, who now look unable to do something as simple as hold a line on the edge of their own box.

There was no escaping the pressure the home side put us under, which is perfectly fine if you’re capable of repelling danger.

All Liverpool managed was to hack and scuff their way out of the box for 20 seconds at a time, until finally conceding a penalty.

Alisson and Virgil clattering each other in stoppage time just about summed it up.

Some of the attacking play can still look neat, still look purposeful and have good interlinking between the attack, but late on here there was none of that.

It was diagonals, balls over the top, direct and repetitive – and not at all accurate or useful. Firmino in the last 10 minutes was the only one trying to play the usual way.

Where does Klopp go from here?

First things first, we’ve a game in midweek which is vital to win, but which also we should win. That’s the return at Rangers and we’ve already seen we are a lot better than them.

But after that, it’s Man City. They were our rivals. Now they are just a team who are constantly battering everyone, while we flounder against dross, average mid-table also-rans and clubs who we shouldn’t even be thinking twice about seeing off with ease.

Like Arsenal, a club we’ve been better than, stronger than and more mentally resiliant than for years, yet couldn’t keep pace with here.

Klopp has a huge, huge job to do over the coming week.

He can say all he wants that things were close, or getting better, or whatever. The truth is we’re miles off it at the moment and the top four is the minimum allowed, and we’re even way off that.

Whatever tactical shape we use next week, it better be much improved out of possession or it’s going to get very messy.