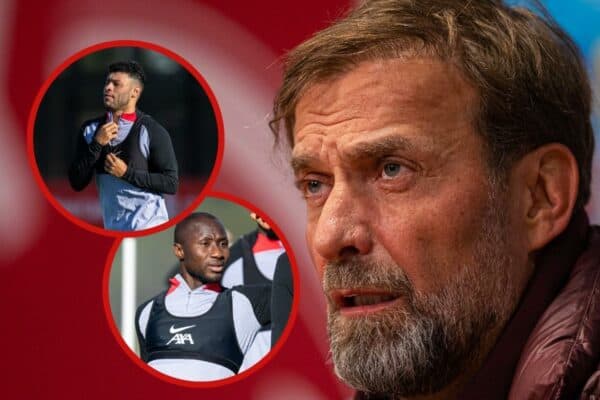 Jurgen Klopp has lamented not having the option to call on Naby Keita or Alex Oxlade-Chamberlain in the Champions League having been told “they would be out for longer.”

The Reds named their 24-man squad for the Champions League group stage at the start of September.

At that time, both Keita and Oxlade-Chamberlain were omitted from the squad with their return timelines not expected to come before the end of the group stage.

However, both midfielders are back in training with Oxlade-Chamberlain handed his first minutes of the season at Forest and Keita starting his programme back to match fitness.

But neither are eligible to even be in the matchday squad, with both Stefan Bajcetic and Arthur (injured) having taken a spot in the 24-man squad instead.

And while Klopp has stressed that he does not want to push players before they are ready, he was clearly not overjoyed about being told one thing and the reality of the situation proving different.

“Same with Naby and Ox [not to bring them in straight away], they need to train,” Klopp told reporters in Amsterdam of his midfield duo.

“They both aren’t in the Champions League squad anyways because everybody told me they would be out for longer, which is good – not back to play but back to be around and play a few minutes.”

With Thiago out with an ear infection, Arthur sidelined until 2023, the need to manage Curtis Jones‘ minutes, and Bajcetic only 18, having further restrictions on the squad is far from desirable.

While neither Keita nor Oxlade-Chamberlain are ready to start a match after three months out, it means that Liverpool cannot even use them as one of their five substitutes in the last two group games.

Keita would have required a spot as a foreign player and while Oxlade-Chamberlain is an association-trained player, with the Reds only having three club-trained players, their squad is capped at 24.

Klopp’s words certainly come across as damning, for the club’s medical department that is – who have come under the spotlight as 19 different players have already missed games due to injury.