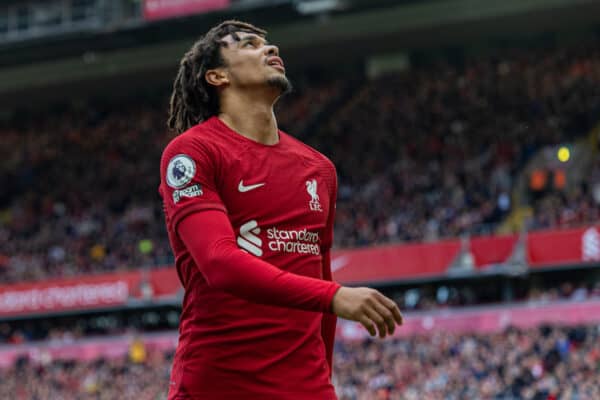 Trent Alexander-Arnold was far from his best again in Liverpool’s 3-3 draw with Brighton, with fans left concerned about his current form.

Jurgen Klopp‘s men returned after a 17-day break, with many hopeful that a big performance was on the cards.

Instead, a hapless opening saw Leandro Trossard score twice for Brighton, with Anfield almost left speechless by what they were seeing.

Roberto Firmino did reduce the arrears before half-time, however, before brilliantly slotting home his second after the break.

Adam Webster’s own goal then put Liverpool in front, but Trossard completed his hat-trick after yet more shoddy defending to earn the visitors a deserved point.

Alexander-Arnold was among those to struggle, amid scrutiny over his form for club and country, and supporters raised their concerns on Twitter.

As much as he insists otherwise, Jurgen Klopp has a big problem with Trent Alexander-Arnold.

Can't really argue with Gareth Southgate at the moment either.

Make no bones about it, Trent is in some abysmal form right now. It's a hard watch.

He's world-class, and all players have tough runs, but it would be wrong to gloss over it.

Completely and utterly out of sorts.

Seen enough of Henderson’s decline & Trents defensive limitations to think we should put Trent into that right sided 8 position. Gomez at right back.

Buy a right back. Play Trent in midfield.

There. I’ve said it.

The downfall of Trent is so sad to see man

I’ve never seen such a disaster class in a performance today than from Trent. Absolutely shocking #LFC

Trent has had a mare down the right hand side. Protection from midfield has been non existent mind you.

I hate that I’m starting to dislike many of my footballing heroes.

These Mane shouts are weird. Our midfield is dead. Trent's confidence is a huge problem.

Trent needs to massively sort himself out

For all Klopp’s defence of Alexander-Arnold this week, and his general poor treatment by Gareth Southgate, there is no doubt that he is in a pitiful run of form.

The 23-year-old was poor for Trossard’s first two goals and looked both tentative on the ball and shaky off it all afternoon.

In truth, Alexander-Arnold could do with a spell out of the side, but with Calvin Ramsay only just returning from injury and still an unproven teenager, that feels unlikely.

He will overcome this slump, as all great players do, but this is a shadow of the player who has lit up Anfield over the past four years or so.