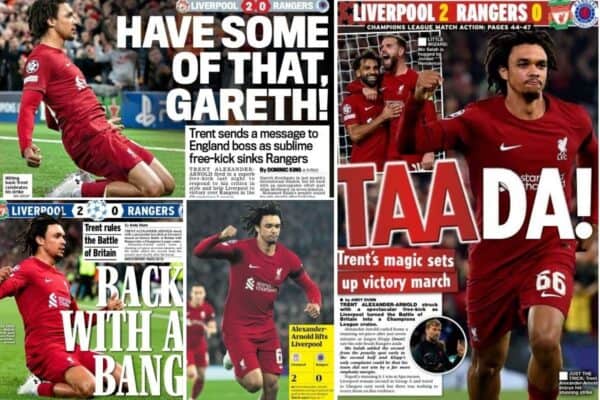 At long last, it was time for the watching media to assess a positive game involving Liverpool, as they swept aside Rangers 2-0 at Anfield.

The Reds hosted the Scottish Premiership outfit in the Champions League on Tuesday night, in what was an important Group A meeting.

Trent Alexander-Arnold‘s trademark free-kick opened the scoring early on, before Mohamed Salah killed off the visitors from the penalty spot after half-time.

Here’s how the media assessed Liverpool’s victory, as they returned to winning ways.

This was precisely what the doctor ordered…

Goal‘s Neil Jones felt this was the Liverpool of old again:

“Where has this Liverpool been all season?! Having spoken of the need for defensive solidity, Jurgen Klopp threw a curveball with his team selection, opting for attack and reaping rich rewards.

“There were four forwards in his starting XI, with Diogo Jota, Darwin Nunez and Luis Diaz all drafted in. Jordan Henderson and Thiago Alcantara were tasked with locking down midfield, doing as a two what Liverpool have so far this season been unable to do with a three. It worked.

“From the word go, there was energy, there was aggression and there was threat. Pressing too. Lots of it. Nunez led from the front, Jota, Diaz and Salah backed up behind, and Henderson and Thiago were superb in keeping the Reds on the front foot.

Martin Samuel of the Mail said the Reds’ superiority really shone through:

“Crisis over. In Europe at least. Napoli will take some catching, but Liverpool are now comfortably on course for qualification in the Champions League group stage.

“The humiliating reverse in Naples is now a distant memory and there have never been any prizes for first place in the round of 32.

“So while domestic form remains a concern, in this competition, their next game is up at Rangers and if this tie is any indicator, there is a gulf between these teams which is unlikely to be overturned even with home advantage at Ibrox.

“The 2-0 scoreline flattered Rangers almost as much as a 6-3 defeat in the Manchester derby flattered Manchester United.

“Were it not for a heroic performance by goalkeeper Allan McGregor, Rangers would have returned north egos bruised and reputation in tatters.”

Richard Jolly of the Independent was impressed by Liverpool, but did also highlight their opponents’ limitations:

“A continental campaign that began with the nadir of their worst performance under Jurgen Klopp now looks on course to conclude somewhere in the knockout stages.

“Napoli’s win over Ajax helps position Liverpool to qualify, if not win Group A, and they can plan for the return trip to Ibrox next week in greater need of points in the Premier League then the Champions League.

“On a night when Liverpool were comfortable and commanding, if not clinical, they took a two-goal lead for only the second time this season – the first brought a further seven goals against Bournemouth – but a relatively small scoreline needs to be placed in the context of Rangers’ limitations.

“Ajax and Napoli both recorded bigger victories over Giovanni van Bronckhorst’s side.”

Alexander-Arnold responded to his critics in style…

Jones was delighted for the right-back after such a tough time recently:

“Talk about the perfect response to all the recent discussion. After a weekend which showcased his weaknesses, here was a display of Alexander-Arnold’s many, many strengths.

“His importance to Liverpool can never be understated, and he needed only seven minutes to underline it, bending a quite sublime 25-yard free-kick into Allan McGregor’s top right-hand corner to give the Reds a lead they would never look like surrendering.

“That’s Alexander-Arnold, not perfect but damn good. There he was, breaking the lines with the crispest of passes, creating danger with his crosses and set-pieces, all the while keeping an eye on the back door.

“Classic Trent, you might say. He may be flawed, but he’s still a genius. But then you knew that anyway, right?”

This Is Anfield‘s James Nalton also loved what he saw from Trent:

“He was able to show his quality immediately in this game with a perfectly placed free-kick to open the scoring.

“He sat back slightly during build-up play, almost forming a back three with Van Dijk and Matip, before sometimes drifting into midfield and occasionally into an attacking position out wide.

“This formation, though it seemed more attacking, meant his teammates were able to give him a bit more help than usual, but his own performance was also much-improved.

“After this game, the only Trent talk will be about how good he was.”

The Mirror‘s Nathan Ridley suggested that Trent writes his own scripts:

“You could say it was written in the script. After weeks of debate over his defensive deficiencies, Trent Alexander-Arnold reminded everyone of his attacking ability with a brilliant free-kick to give Liverpool the lead in the seventh minute.

“As the Reds began rampantly, Darwin Nunez drew a foul from ex-Liverpool centre-back Ben Davies on the edge of the D. Up stepped Alexander-Arnold, who curled a beauty beyond the outstretched Allan McGregor.

“The 40-year-old Gers goalkeeper couldn’t do anything about the sweet strike, which ripped up Giovanni van Bronckhorst’s game-plan before his side could find their feet at Anfield.”

Bigger tests lie ahead, though…

The Liverpool Echo‘s Paul Gorst was hopeful that this win could be a catalyst ahead of huge games against Arsenal and Man City:

“While few will genuinely believe this 2-0 victory over a modest Rangers in the Champions League marks the real return of normal service for Jurgen Klopp‘s team, it is at least a hop in the right direction ahead of a couple of weeks – and fixtures with Arsenal and Manchester City – that have the potential to transform this season.

“Whereas Liverpool were unable to build on their 2-1 win against Ajax in the previous European game here due to the postponement of their Chelsea visit and the subsequent international break, this latest Group A triumph can be the catalyst that sees momentum, rhythm, consistency and stability all eventually find their way back to the Reds.

“They are four qualities that have been sorely missing of late. This was much more like it at least.”

Writing for the Telegraph, Sam Wallace looked ahead to a crucial 11-day period:

“The next 11 days present Liverpool with the kind of challenge that every fine team with an eye on the important prizes in the game must confront: a visit to the league leaders and, after that, a meeting with the side that seem capable of beating anyone, at any time.

“Between those two Premier League games, Jurgen Klopp’s team will venture north to take on Rangers in their Ibrox habitat where the assumption must be that something more serious than was attempted on this evening will be offered by the team from Scotland.

“Liverpool have been beaten soundly on their only other European away trip so far this season and the game in Glasgow, a week on Wednesday, will surely present more of a challenge than the one Rangers presented at Anfield.”

Finally, Nalton claimed that a win at the Emirates this weekend would feel significant, adding that Klopp should stick with the 4-2-4 formation:

“Arsenal are next up, but there are a few days off with the game not coming until later on Sunday afternoon.

“Regardless of the break, Klopp is unlikely to stick with this same lineup, and most would probably predict a return to the lineup for Roberto Firmino.

“But this 4-2-4 setup was very encouraging, and it could well be a case of dropping Firmino into it in place of one of the four who started tonight, as was the case when he replaced Jota in this game.

“They would have to watch out for being overrun in midfield, making sure there are contributions in defence from both full-backs, and Klopp will no doubt be tempted to return to 4-3-3 against stronger opposition away from home.

“A win against Arsenal wouldn’t put Liverpool back in the title race, but it would be a statement win against the form team in the Premier League so far along with City, who the Reds will face in the subsequent league game with another clash with Rangers in between.”