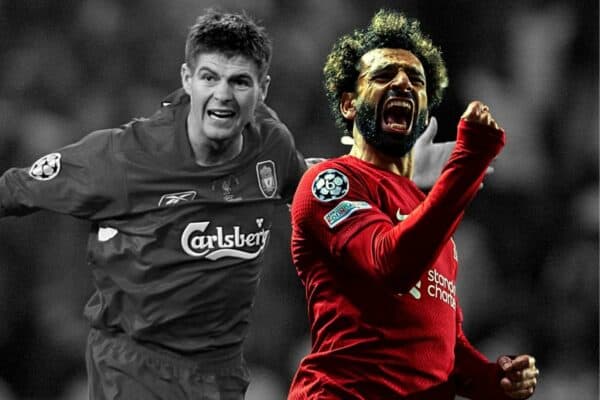 Mohamed Salah has already leapfrogged Steven Gerrard in the Champions League, and could now equal the midfielder’s European record against Ajax.

The Egyptian’s 38 goals in the Champions League proper is a record for any player for a single English club, beating the 36 of Didier Drogba (Chelsea) and Sergio Aguero (Man City).

One of Salah’s 39 in total came in a qualifier.

Salah’s hat-trick at Rangers two weeks ago saw him record the fastest in the history of the Champions League (timed at six minutes, 12 seconds) and it was only the sixth by a substitute.

He became, after Gerrard and Steve Staunton, only the third Liverpool player to hit a treble coming off the bench.

Going into Matchday 5, the competition’s leading scorers this season all have five goals – Salah, Erling Haaland and Robert Lewandowski.

Eight of Salah’s nine goals this season have been scored after half-time – the exception being his 17th-minute goal against Ajax at Anfield.

A draw will guarantee Liverpool a place in the knockout stages.

Ajax will be confirmed in third place and reach the Europa League if they draw and Rangers lose to Napoli in Italy.

They can keep their hopes alive of still being in the Champions League in the New Year if they win this game by any two-goal margin – or 1-0 and results go their way in Matchday 6.

Alisson could play his 200th game for the Reds in all competitions. He has kept 89 clean sheets.

Only six goalkeepers have kept more clean sheets for Liverpool, with only two to play 50 or more times enjoying a higher rate of shutouts than the Brazilian.

Andy Robertson could reach the landmark of 50 European appearances for Liverpool – all in the Champions League.

Jordan Henderson could captain Liverpool for the 250th time in all competitions.

Ajax have played eight times at home this season in all competitions – 45 goals have been scored with Ajax contributing 31.

At the Cruyff Arena this season they have conceded six to Napoli in the Champions League and five to PSV Eindhoven in the Dutch Super Cup.

They have conceded 14 goals in the last five games.

Since a heavy 5-1 defeat at Ajax in 1966, Liverpool are unbeaten against Dutch teams in 16 meetings – winning 11 and drawing five.

In eight encounters in the Netherlands, the Reds have won four and lost once with three draws.

In the last six visits to the country the Reds have conceded just once – at PSV Eindhoven in December 2008.

Jurgen Klopp has won all five of his clashes with Ajax, the first two coming while at Borussia Dortmund.

After keeping five successive clean sheets earlier in the campaign Ajax have conceded 19 times in the last eight.

Ajax have not kept a clean sheet since a 5-0 home win over Heerenveen in September.

He has reffed Ajax once – their 5-1 win at Sporting CP in last season’s Champions League.