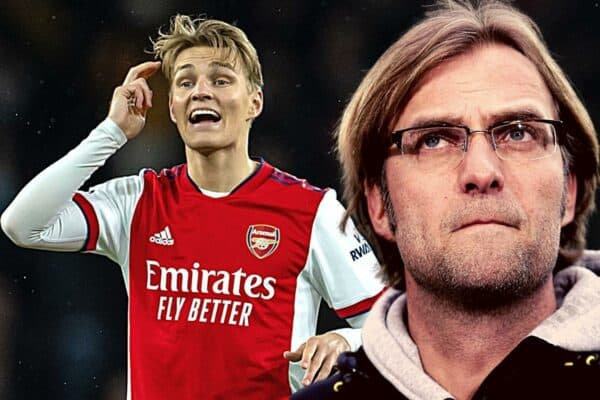 Back in 2014, almost every club across Europe was courting a 15-year-old Martin Odegaard, with Jurgen Klopp revealing talks with the Arsenal captain.

Odegaard rose to prominence as the youngest player to feature in a European Championship qualifier when, still only 15, he played for Norway in a 2-1 win over Bulgaria.

Already a regular with Stromsgodset, the prodigious midfielder attracted interest from a host of big clubs including Liverpool, who invited him for a trial at Melwood weeks before his 16th birthday.

Though he described the Reds as his “dream club,” Odegaard ultimately joined Real Madrid in a seven-figure deal, but made just 11 appearances for their senior side.

After loans with SC Heerenveen, Vitesse, Real Sociedad and Arsenal, he is now a permanent fixture at the Emirates, wearing the captain’s armband, and will be a key player when Liverpool visit on Sunday.

Speaking ahead of the clash with Arsenal, Klopp recalled his attempts to sign Odegaard while Dortmund manager, praising him for becoming “the player everybody expected.”

“Martin Odegaard, I spoke to him when he was 15 from Norway, when the whole world wanted him, and he decided for Real Madrid,” he told reporters on Friday.

“I remember as if it would have been yesterday. We sat on a table with his dad and we were all so excited.

“Then there were a few difficult years, which is normal when you are that much in the spotlight.

“So he became the player everybody expected him to be at that time.”

Odegaard is not the only player in the Arsenal squad that Klopp tracked from a young age, with Brazilian forward Gabriel Martinelli among those the manager hailed as he reflected on their progress under Mikel Arteta.

“When you need some time, nobody wants to give you time,” he said.

“Maybe not all of us deserve time, because you still have to be good to use the time, and Mikel obviously did. Really, lots of respect for it.

“They had a lot of talent already in the last few years. I think Martinelli, I was very early excited about him and he became exactly the player I expected.

“Saka, I think from the first day since he’s playing it’s incredible.

“Gabriel Jesus, if anybody knew how good he could be, not in a Man City shirt, the fixed No. 9 in the lineup, then it was Mikel because he worked together with him.

“Same with Zinchenko, saw great things. Brought Xhaka back on track. Thomas Partey, everybody knew how good he is when he was at Atletico.

“Then the last line is now really well settled, they have found a way how they want to defend. That’s it.