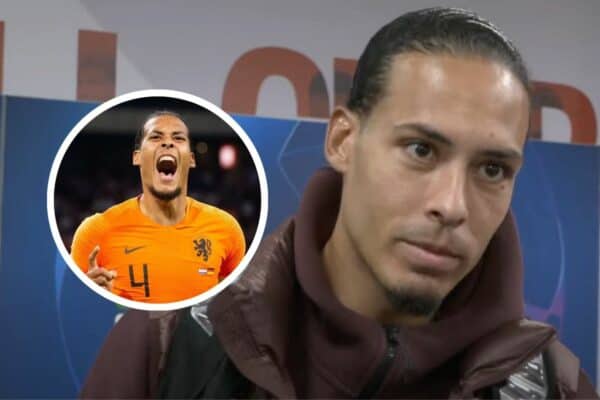 As a host of Liverpool players prepare to feature for their nations at the World Cup later this month, Virgil van Dijk insists those involved in Qatar will “definitely” need a break after the tournament.

Netherlands captain Van Dijk is one of several players who will jet off for the first-ever winter World Cup once the Reds have played out their final three matches before the mid-season break.

The likes of Alisson, Trent Alexander-Arnold, Jordan Henderson, Fabinho and Darwin Nunez also look likely to be involved, with Liverpool not due to resume their Premier League campaign until Boxing Day.

However, with the World Cup final taking place on Sunday, December 18, there is a strong chance that not all of those returning from the tournament will be able to feature in Liverpool’s festive fixtures.

Van Dijk believes he and Liverpool’s other players that play in Qatar will definitely need a break once their international commitments have concluded.

The Reds face Tottenham and Southampton in their final two league games before the season grinds to a halt, with Van Dijk unlikely to feature in the League Cup tie against Derby next week.

“Yeah,” Van Dijk instantly responded when asked if he felt he and the other players involved in Qatar would need a break afterwards.

“It depends, hopefully we reach the final and we win it, but you never know. We’ll definitely need a little break and we’ll probably get one as well, we’ll see.

“For me personally, I probably have two more games to play, and then my full focus will be on Holland and doing as well as I can for my country.”

Jurgen Klopp certainly won’t want to deny those players a break, and from a selfish point of view, the Liverpool boss will be hoping that all of his players involved in Qatar are eliminated early on, to give themselves as much recovery time as possible before the second half of the season.

Any Liverpool players that reach the latter stages of the tournament are likely to miss the Boxing Day visit to Aston Villa, and would surely be doubts to take on Leicester on December 30 and Brentford on January 2.

Van Dijk went on to explain how he hopes those not at the World Cup will benefit from more time on the training pitch with Liverpool, with the Reds set to jet off to Dubai for a mid-season training camp, where they’re also due to play several friendlies.

“It’s definitely a different first part of the season. Anything can happen after the World Cup, in my opinion. We try to finish as strongly as we can.”