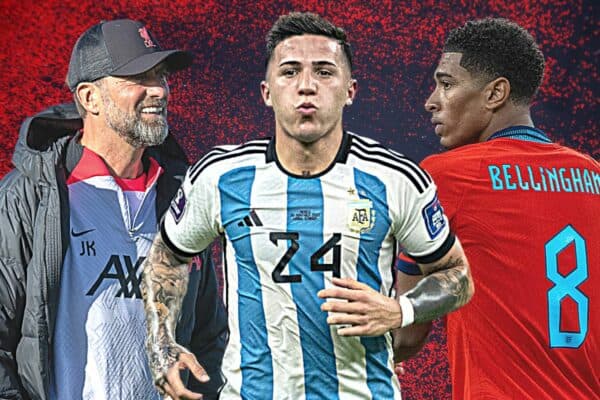 Jude Bellingham has been the name on the lips of every Liverpool fan in recent weeks, but there should perhaps be the same amount of excitement surrounding the continuous links to Benfica and Argentina’s Enzo Fernandez.

The 21-year-old midfielder has featured heavily for his country on their journey to the World Cup final in Qatar, and if reports in Portugal are to be believed, Liverpool are now front-runners in the race to sign him.

Earlier this week, Portuguese publication O Jogo backed up claims from Argentina and Spain that the Reds have a “pre-agreement,” of sorts, in place to sign Fernandez, with the club said to have made “a promise to match” any offers from elsewhere.

Having only joined Benfica from River Plate last summer, and with a reported €120 million release clause in his contract, those stories should be taken with a pinch of salt, but links to Fernandez go back to August, when Sky Sports‘ Melissa Reddy said Liverpool had “kept a watching brief” on him before he made the move to Portugal.

Clearly, Fernandez is a player on Jurgen Klopp‘s radar, but why is there so much hype around the midfielder, and do they really stand a chance of signing him?

For more insight on Fernandez, This Is Anfield spoke to Argentinian football expert Dan Edwards (@DanEdwardsGoal) of GOAL (@GOAL).

The last 18 months have been a fairytale for Enzo, beyond anything even he must have imagined as possible.

In June 2021 he was just finishing up what had been a decent loan spell with Defensa y Justicia, a solid mid-table team and fresh off their biggest-ever season which landed them the Copa Sudamericana title, but on a different level entirely to River.

Marcelo Gallardo saw something in Enzo, though, and brought him straight into the first team, and the rest is history.

With the possible exception of Julian Alvarez, nobody was more impressive this past year in Argentine football. Enzo ran the midfield for River and led them to their first Primera Division crown in seven years, before enjoying an even better start to the 2022 season.

It was clear Benfica got an incredible bargain in the last transfer window and so it proved: he picked up exactly where he left off, shining in Portugal and the Champions League, and there are not many young midfielders out there with the ability or potential Fernandez enjoys.

How highly is Fernandez rated in Argentina?

Neck and neck with Alvarez as the future of the national team for the next 10 to 15 years.

Everybody saw how good he was going to be at River, and while the sheer scale of his World Cup success might have come as a surprise, the feeling was always there that if given a chance, he could make a real impact in a very good Argentina team.

Do you think his performances at the World Cup will have hiked up his price tag?

His value must have gone through the roof. Benfica paid around €10 million plus add-ons to sign him in July and I don’t think it’s an exaggeration to say you’d have to multiply that number by a factor of at least six or seven to get close to signing him now.

Unless injury or other misfortunes intervene, as I said above, Argentina should have their midfield general for the next decade at the minimum.

Is he a midfielder you think would suit a Klopp team?

One of Fernandez’s most valuable qualities is his versatility.

Over the course of his career he’s played defensive, centre and attacking midfield and on both wings, and one of the hallmarks of this World Cup has been his ability to shift roles even within a match to fit the team’s needs, dropping back or moving forward 10 yards, opening or closing the game as the situation demands.

He could be a holding man with brilliant range and passing, or a mobile playmaker, or anything in between, and I’m sure his engine and stamina in particular would be a virtue in Klopp’s press as he just does not seem to tire.

Having only joined Benfica last summer, could his contract situation be an issue?

They’re obviously going to do everything they can to hold on to Fernandez as long as possible.

I don’t think there’s any question of him moving in January, with Benfica still involved in the Champions League and Enzo of course cup-tied for any of the other challengers, but even the following June, given their lucrative sales recently, it would probably have to be an outrageous offer to tempt them into parting ways after just a year.

If reports of a €120m release clause are correct, would he be worth the investment for Liverpool?

That’s a lot of money, no question about it.

If you’re asking if there is a better elite young midfielder Liverpool can get for that price or a little lower I’d say no.

Fernandez deserves to be on the same level as say Bellingham as the absolute best choice for his age and position.

I can’t see Liverpool or any club right now shelling out the entire release fee because it’s an enormous price tag, but if he continues in this fashion for the rest of the season at Benfica (obviously once rested from this gruelling World Cup), his fee might start creeping towards that ceiling – and no team is likely to regret adding such a fine player to their ranks, even for nine figures.