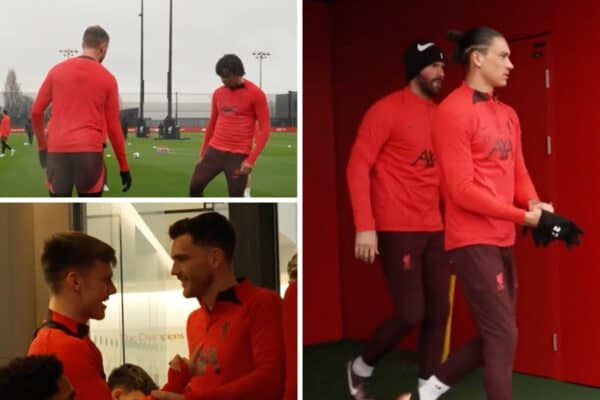 Jurgen Klopp‘s squad are back on Merseyside and for the first time in nearly six weeks are preparing for a competitive game, at Man City in the Carabao Cup on Thursday.

The Reds returned from Dubai late last week and are now back in the familiar wet, windy and cold UK, quite the contrast from the sunshine they just enjoyed.

But their presence at the AXA Training Centre signals the end of the World Cup break, with Liverpool’s defence of the Carabao Cup their first port of call.

It kickstarts a run of five games in 16 days and Klopp will need his full squad as the Reds look to get back on track after a rocky start to 2022/23.

Here are four things we noticed from Liverpool’s training session on Monday.

With Liverpool’s return to competitive action just days away, Klopp’s squad is shaping up nicely as he welcomed back a number of his World Cup representatives.

Trent Alexander-Arnold, Alisson, Fabinho and Jordan Henderson were all back and involved in the Reds’ session on Monday, though the captain did do some individual training in Dubai.

Virgil van Dijk, though, remains absent and it is not a complete surprise as the Dutchman played the most minutes of any Red at the World Cup (480) and throughout the season so far (1,890).

If there’s any player in need of an extended break, he is the one.

Alisson, Fabinho, Henderson and Alexander-Arnold are all likely to be in contention to feature in Thursday’s match, though.

Ibrahima Konate is the other Red yet to return from Qatar and will only do so after Christmas – while Curtis Jones remained absent.

Jota in the gym

Diogo Jota‘s long-term calf injury is not expected to see him back on the pitch until mid-February, with the last 16 Champions League tie against Real Madrid a potential comeback game.

The No. 20 was with the squad in Dubai and he continues to put in the work during his rehab, pictured in the gym alongside his teammates.

It’ll have been another welcome boost as recovering from an injury can be a lonely and isolating task.

Having seen Luis Diaz succumb to another injury in his knee swiftly after recovering from his previous issue, Liverpool will certainly be cautious when they integrate Jota back into team training.

Klopp called on nine teenagers during the training camp in Dubai and the majority were present at a wet and windy AXA Training Centre on Monday.

Ben Doak, Jarell Quansah, Bobby Clark and Stefan Bajcetic were all involved, as too goalkeepers Harvey Davies and Fabian Mrozek.

Seventeen-year-old Doak was seen alongside his fellow Scotsman Andy Robertson, who he could share the pitch with at some point on Thursday as game time is not out of the question and his involvement in training could be a hint at just that.

It’s good to have the Reds back!

Speaking of Robertson, he was his loud and energetic self during the session – the LFCTV cameras were readily pointed in his direction and it’s no surprise really.

He was happy to have his full-back partner Alexander-Arnold back in the fold and who can blame him, it means things are starting to look normal again after the long break.

The Reds have not played a competitive game in nearly six weeks and with the squad taking shape and training back in full swing on Merseyside, we’re eager for that first whistle on Thursday.

Clearly, so is Robbo!