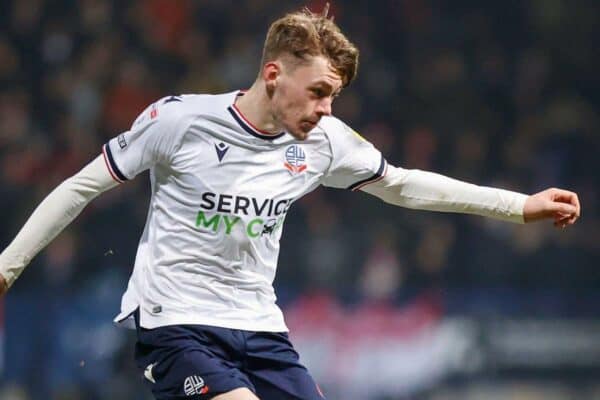 Liverpool loanee Conor Bradley capped a big win for Bolton over the Man United under-21s to make it to the quarter-finals of the EFL Trophy.

The EFL Trophy, known for sponsorship purposes as the Papa John’s Trophy, pits clubs from League One and League Two against academy sides from the Premier League.

Liverpool are yet to advance from the group stage in any of the four campaigns in which they have entered – including this season, which brought defeats to Salford City, Accrington Stanley and Rochdale.

It has, however, provided some of the club’s loanees more action, with Bradley among those to start for Bolton as they took on Man United on Tuesday evening.

Up against a young United side featuring the likes of Shola Shoretire, Joe Hugill, Charlie Savage and Zidane Iqbal, the League One outfit enjoyed a comfortable 4-0 victory.

Their goals didn’t come until late in the second half, however, with Dion Charles having blocked a goalbound header from his own team-mate, Will Aimson, before the interval.

A mistake from United defender Marc Jurado was pounced upon by Dapo Afolayan for a 68th-minute opener, with Aaron Morley curling home a free-kick soon after to make it 2-0.

Bolton were already cruising to victory when Bradley stepped up with a goal and an assist in stoppage time, with the right wing-back making a brutal impact in the space of three minutes.

His assist came after reading a sloppy pass and driving forward to lay Amadou Bakayoko through for a deflected strike, before Bradley then tapped in Afolayan’s cross-shot at the far post to cap Bolton’s victory.

Still only 19, that brings the Northern Ireland international’s tally for the season to five goals and five assists in 25 games.

It was his first goal involvement in close to a month, however, having last directly contributed in the 2-1 win at Fleetwood Town on November 19.

That victory over Fleetwood marked fellow Liverpool loanee Owen Beck‘s full debut in League One, but the young Welshman was an unused substitute on Tuesday night.

Beck had missed the weekend’s 3-2 defeat at Shrewsbury due to a suspected injury, but could come back into the side for Saturday’s clash with Exeter City.