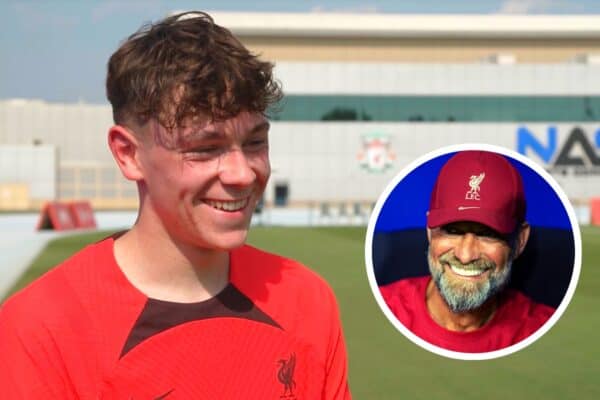 Liverpool defender Luke Chambers received praise from Jurgen Klopp during their time in Dubai, which he has taken as a “really big confidence boost.”

Prior to the Reds’ first friendly of the Dubai training camp against Lyon, Klopp singled Chambers out for unprompted praise in his pre-match interview.

“When I look at Luke Chambers I think ‘wow, he has everything for a centre-half’, the manager said. “Apart from a body.”

It was interesting to hear the manager speak so enthusiastically over a young player in this context, particularly given Chambers’ natural position has been at left-back.

The 18-year-old came off the bench as a left-sided centre-back in the 3-1 defeat to Lyon, before going unused in the 4-1 victory over AC Milan.

Speaking to LFCTV between the two games, Chambers soaked in the praise from Klopp, and looked to address the one flaw he currently has as a centre-back.

“When you hear something like that it’s always a really big confidence boost,” he said.

“But I’ll just keep going in the gym and keep building up as I can and I’m sure that will come.”

Chambers was all smiles throughout his interview, and added: “It’s always good adding a new position to your game.

“Left centre-back I’ve played in quite a few times for the U21s, in the UEFA Youth League and stuff.

“In the future, you never know, I could be a left centre-back or a left-back. It’s always good trying out new positions.”

Though Klopp has used both natural right-siders Joe Gomez and Joel Matip in the left of the centre-back pairing at times, it is rare to find a comfortable fit, as has been the case with Virgil van Dijk and Ibrahima Konate.

In that respect, it makes sense to work on a player of Chambers’ potential at this early stage to potentially nurture the next addition to the defensive group.

“If they want to put me at left centre-back or left-back, I think I can do a job there,” he continued.

“I’d hope [being versatile helps my chances at first-team level].

“It gives you more opportunities if you’ve got more positions you can play in, and left centre-back and left-back, I think I can do them both really comfortably.”