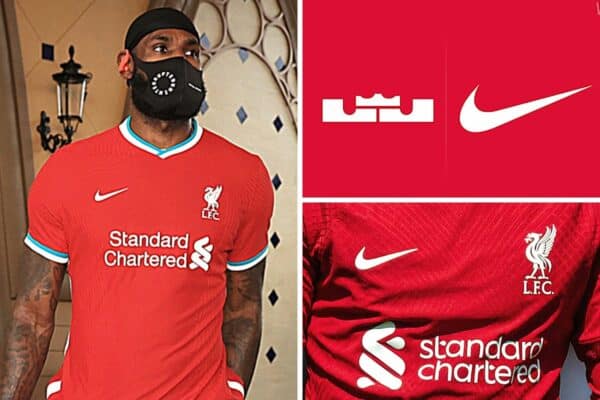 Nike are set to unveil a new LeBron James themed Liverpool kit this season, according to a reliable source for kit news and updates.

Back in 2011, basketball legend James agreed a marketing deal with Fenway Sports Group that included a two percent stake in Liverpool, but now he, along with associate Maverick Carter, are classed as partners of the group.

And that now finally seems to be coming to fruition, with Footy Headlines reporting on Wednesday that a Liverpool x LeBron James themed kit would be released in “early 2023.”

For now, there are no further details on the colour, design, or whether it’s a kit Liverpool will wear during matches, but the story claims it will be “part of a wider collection,” something Werner alluded to back in 2021.

“We’re doing a product line with LeBron and Liverpool,” Werner told the Boston Globe at the time.

“Nike is creating seven or eight products that connect LeBron with soccer.

“I don’t know specifics yet, but they’re going to create seven or eight products that rival the connection that Michael Jordan has with Nike.”

LeBron has been pictured in Liverpool kits and training wear on a number of occasions, and it’s no real surprise to see Nike taking advantage of the link between one of their most famous athletes and LFC.

Earlier this year, Nike released some LeBron James x LFC basketball shoes, but this will be the first item of clothing between the collaboration.

Air Jordan is one of Nike’s most recognisable ranges, and their association with NBA legend Michael Jordan has seen its use for Paris Saint-Germain kits since 2018.

Nike have also produced special Air Jordan fourth kits for PSG during that time, with Jordan himself receiving a sizeable cut of the profits.