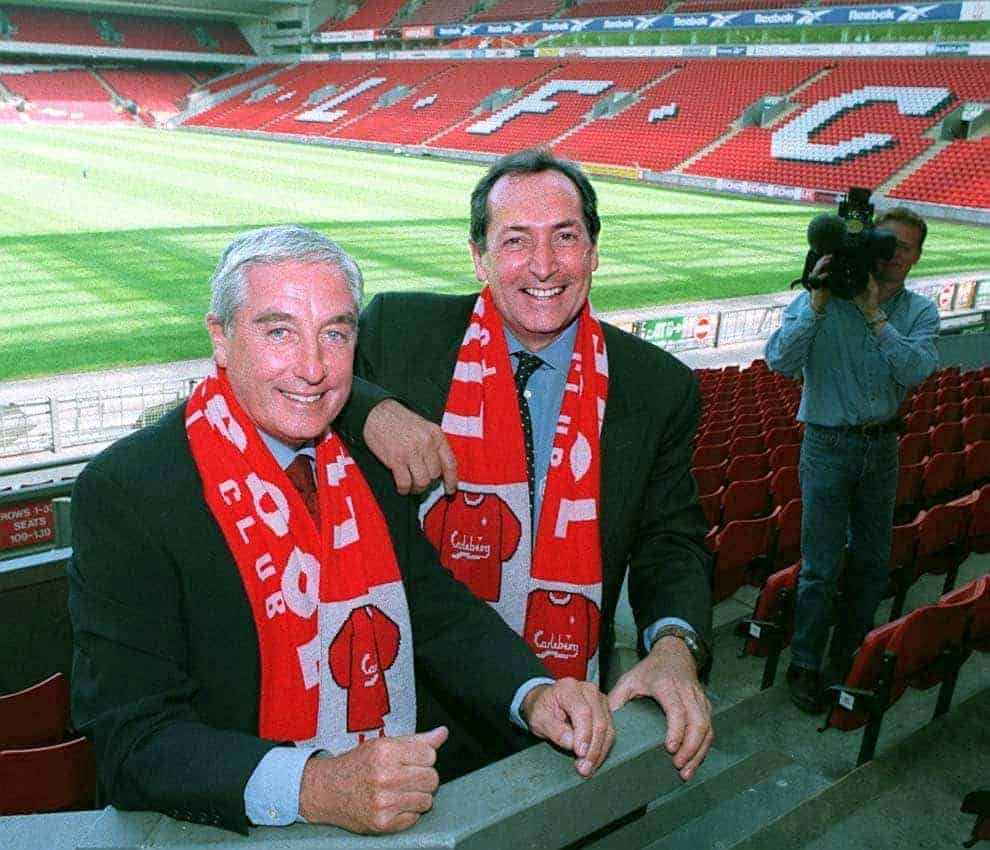 For the first time since the dawn of Liverpool Football club, the board decided to let two managers run team affairs. This kind of partnership hadn’t proved particularly successful at other clubs and it didn’t work at Liverpool either. If the appointment of Kenny Dalglish as the club’s first player-manager in the middle of the 1980’s had been a surprise, this was even more so. There could only be one winner in this partnership and it wasn’t going to be Roy Evans.

Many regarded Gerard Houllier’s appointment as a demotion for Evans, as if it indicated that he wasn’t up to running things on his own. If the club’s fortunes improved, Houllier could claim it was because of his arrival; if they didn’t, he would be able to claim that too much had been done wrong before his arrival. A manager’s tasks are many. Was it ever really made clear who would be doing what ? When it came to team-selection, what if the two men disagreed? Who would have the casting vote or final say? Long after he had left Anfield, Roy Evans wrote about such problems in his book ‘œGhost on the Wall’.

Nobody seemed too surprised by the arrival of a Frenchman as opposed to another British name. The English game was going continental and supporters were getting used to the arrival of foreign players and coaches. I doubt if many Arsenal fans had heard of Arsene Wenger before he went to Highbury. It was probably the same for most Liverpool fans for Houllier. A vague recollection that he had been in charge of the French national team when it failed to qualify for the finals of the 1994 World Cup in America in late and dramatic circumstances and that’s about all. Probably most supporters hoped that his arrival would be of benefit to the whole club and if he was able to take some of the burden of office away from Roy Evans then that could only be a good thing.
Initially things seemed to be fine but it didn’t take long for the first rumblings of discontent to be noticed. A good start had been made to the league programme with three wins and a draw from the opening four fixtures. Then came an away match with West Ham United. There was apparently a disagreement over whether Riedle should start the game or not. One wanted to save him for the European match in midweek; the other thought he should play from the start at Upton Park. In the end Riedle didn’t start. He came on as a substitute and scored but the game was lost. Something else that was probably lost that day was any early bond the two men had enjoyed after the Frenchman’s arrival to join the Englishman.

The next three away matches in the league saw two defeats and one draw but no goals scored by a Liverpool player. The fans were starting to get concerned that the good start to the season had not been built on. Attendances at Anfield for league games remained high but only 22,000 turned up to watch Fulham in the League cup towards the end of October and less than 21,000 for the visit of the much more high-profile Tottenham in the next round. Spurs were having a bad time themselves but they outplayed the home team, who only had a late Owen goal as consolation in a humbling 3-1 defeat. This defeat came only 3 days after unfancied Derby County had also won a match at Anfield in the league. The discontent from the supporters at the end of the cup-tie was there for all to see and hear. Roy Evans had had enough. By the time Leeds United came to Anfield the following weekend, Gerard Houllier was in sole charge of team affairs.