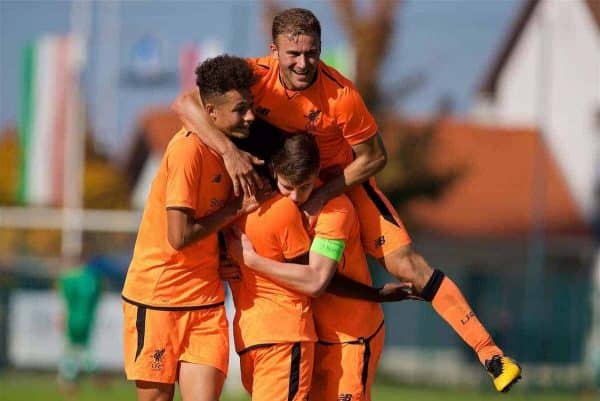 Liverpool U19s won 4-1 at Maribor U19s in the UEFA Youth League on Tuesday, with Bobby Adekanye registering a brace in Slovenia.

Liverpool’s youngsters started their campaign with a 4-0 win against Sevilla, before suffering a 2-1 defeat away to Spartak Moscow last month.

Both Rhian Brewster and Edvard Tagseth were unavailable due to international commitments, but star youngster Ben Woodburn did start, and was made captain by Steven Gerrard.

Liam Millar missed the target after nice link-up with Adekanye, as Liverpool looked to make a fast start to proceedings.

The Reds found themselves behind midway through the first-half, with a rare Kamil Grabara error allowing Aljosa Matko to give Maribor the lead from close-range.

Adekanye restored parity quickly, however, finishing well after being set-up by Curtis Jones, and the game was turned on its head when Herbie Kane fired in a rebound after Adenkaye hit the crossbar.

Shortly after half-time, Liverpool were 3-1 up, as Millar found the net from the influential Adekanye’s cross, and the Reds’ superiority over their opponents really started to show.

Adekanye got his second of the afternoon with a low finish, in what was an excellent individual performance by the 18-year-old.

With four minutes remaining, Adis Hodzic was dismissed for Maribor after receiving a yellow card, as Gerrard’s side eased to victory in the end.

The win leaves Liverpool top of Group E on six points from three matches, with Sevilla and Spartak Moscow playing out a 1-1 draw in Russia.

Man of the Match: Bobby Adekanye