The best Liverpool FC quotes from former players and managers.

“I want to build a team that’s invincible, so that they have to send a team from bloody Mars to beat us!”

“For a player to be good enough to play for Liverpool, he must be prepared to run through a brick wall for me then come out fighting on the other side.”

“I always said we had the best two teams on Merseyside… Liverpool and Liverpool Reserves.”

“Some people believe football is a matter of life and death. I am very disappointed with that attitude. I can assure you it is much, much more important than that.”

“A football team is like a piano. You need eight men to carry it and three who can play the damn thing.”

“The word fanatic has been used many times…I think it’s more than fanaticism. It’s a religion to them. The thousands who come here, come to worship…it’s a sort of shrine, [Anfield] isn’t a football ground.”

“Take that bandage off! And what do you mean your knee? It’s Liverpool’s knee!

– To an injured Tommy Smith

“If Everton were playing at the bottom of my garden, I’d shut the curtains.”

“The trouble with football referees is that they know the rules but they don’t know the game!”

The people who come to watch us play, who love the team and regard it as part of their lives, would never appreciate Liverpool having a huge balance in the bank. They want every asset we possess to be wearing a red shirt.”

“The saddest and most beautiful sight I have ever seen.”

“Put ‘WE LIED’ on the front page of your newspaper.”

– On how the S*n could make amends to Liverpool

“There is no one anywhere in the world at any stage who is any bigger or any better than this football club.”

“We have a marvellous backroom team at Anfield who share the work-load wonderfully well. No club has a more able and closely-knit staff than ours. The Anfield boot-room has become legendary, and we have a full and frank exchange of views in there in a leisurely atmosphere every Sunday morning. It’s just like popping down to the local.”

“The whole of my life, what they wanted was honesty. They were not concerned with cultured football, but with triers who gave one hundred percent.”

“I said that when I took over that I would settle for a drop of Bell’s once a month, a big bottle at the end of the season and a ride round the city in an open top bus!”

“It’s not about the long ball or the short ball, it’s about the right ball.”

“If you’re in the penalty area and aren’t quite sure what to do with the ball, stick it in the net and we’ll discuss your options afterwards!”

“I’ve been here during the bad times too – one year we came second.”

“Football is my oxygen.”

“We don’t destroy our heroes today when we worshipped them yesterday.”

“To work hard and have our supporters behind us and believing until the end, you run a little bit more.”

“We have to change, from doubters to believers—now.”

“The last half an hour against Dortmund [in the Europa League at Anfield] is the best I’ve ever had. I felt nobody could stop us. I wasn’t sure we would score a goal but it was crazy.”

“If you had Wikipedia or Google and put in ‘European nights’ the answer must be: Anfield.”

“Only silly idiots stay on the floor and wait for the next defeat.”

“I said to the boys, ‘I think it’s impossible but because it’s you we have a chance.’ And we believed in this chance…I don’t know how the boys did it. These boys are f***ing mentality giants, it’s unbelievable.”

– After winning Champions League in 2019

“I’ve said before that football always seems the most important of the least important things.”

– During Liverpool’s trophy parade in 2022

“When I die, don’t bring me to the hospital. Bring me to Anfield. I was born there and will die there.”

“Sometimes I feel I’m hardly wanted in this Liverpool team. If I get two or three saves to make I’ve had a busy day.”

“If Shankly was the Anfield foreman, Paisley was the brickie, ready to build an empire with his own hands.”

“Liverpool are magic. Everton are tragic.”

“Liverpool without European football is like a banquet without wine.”

“I don’t like champagne, don’t smoke cigars, haven’t any real jewellery at all apart from the 8 pieces of gold I picked up at Anfield. The most important relationship at a football club is not between the manager & chairman, but the players and the fans.”

“Cut my veins open and I bleed Liverpool red. I love Liverpool with a burning passion.”

“When they start singing ‘You’ll Never Walk Alone’ my eyes start to water. There have been times when I’ve actually been crying while I’ve been playing.”

“It’s forever. It’s not just about a football club, it’s about family, how you live.”

“Liverpool spoke to me and explained everything. They said I was really important. That made me very proud and at that point I focussed my thoughts on Liverpool.”

“The Anfield atmosphere is difficult to explain, you just have to experience it. Every player should try it at least once in his career.”

“The most important relationship at a football club is not between the manager and the chairman, but the players and the fans.” 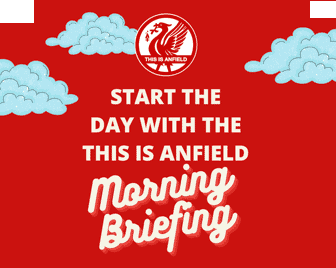 A roundup of Liverpool FC news, analysis & video in your inbox every morning.

An informative, tongue-in-cheek roundup of the day’s events at LFC and wider football world.